The Great Pyramid at Giza, and its two cousins at the Giza pyramid complex, have long dominated popular understanding and discussion of the pyramids of Egypt. In some ways, this is deserved — the three structures are a testament to phenomenal human ingenuity and capability, as well as a demonstration of Ancient Egypt’s tremendous ability to mobilize thousands of workers across a considerable distance.

But they’re literally just one piece of the story of tomb-building and artwork in ancient Egypt, and one that occupies a relatively small slice of time. Here, then, are five other major pyramid complexes in Egypt, as well as a discussion of what they taught us about the time period in which they were built.

(Note: In the list below, “Name” refers to the name of the pyramid complex in ancient Egyptian.)

The Step Pyramid of Djoser is famous enough that plenty of people have heard of it. What’s less-well known is how this structure — the earliest-known example of large-scale, cut-stone construction — is a stunning departure from the structures that came before it. Prior to Djoser, burials in Ancient Egypt occurred in mastabas, ancient tombs of mud-brick with sloping sides. The Step Pyramid represents multiple mastabas stacked on top of one another, but the structure was not simply an elaborate tomb. Archaeologists believe the entire design may echo the Egyptian crown of the era, and have been intended to facilitate the king’s ascension to join the North Star.

An absolute warren of passages exists underneath the Step Pyramid. The original mastaba is M1, followed by M2 (an expansion on all sides), and then M3, an expansion on just the east side. The original four-layer structure, P1, was then further expanded into P2, the same shape and size of the Step Pyramid today. The entire pyramid complex is surrounded by the Great Trench, a trench 750 meters long and 40 meters wide. The rock to build the Step Pyramid is believed to have been quarried from here. The Step Pyramid of Djoser is so revolutionary in part because it represents a huge leap forward over everything that had come before. Its influence would be felt in Egyptian pyramid construction for hundreds of years.

Meidum is thought to be the second pyramid built after Djoser’s famous Step Pyramid. The original plan called for a pyramid of seven steps, but the pyramid was later reworked for an eight-step base. The architect, the successor of Imhotep, genius builder of the Step Pyramid, later decided to use a limestone fill to transform Meidum from a step pyramid to a “true” pyramid. Where the initial foundation and initial modifications rested directly on bedrock, the final limestone layer was laid horizontally rather than angling towards the pyramid’s core, and rested on sand. These modifications compromised the structure, and the Meidum pyramid is believed to have collapsed during a downpour while still under construction.

The Meidum Pyramid may be the first to feature an actual burial chamber at its core, and is the first of three pyramids built by Sneferu. The Bent Pyramid (our feature image) shows a sharp shift in angle that may have been adopted after the collapse of Meidum, which makes this pyramid an excellent example of how the Egyptians of the Old Kingdom applied knowledge from high-profile failures when building later tombs. Its design makes it clear that the ancient Egyptians were exploring more advanced form of pyramid construction quite rapidly after the success of the Step Pyramid.

Sahure may look like little more than a rubble pile, but it’s an exceedingly important site. While the pyramid itself is poorly preserved, the larger complex to which it belongs represent the final phase of a layout system that would remain unchanged for more than 300 years. The screenshot below, from Google Maps, shows the size and scope of the ruined pyramid, pyramid complex, mortuary temple, and a roofed causeway, which once ran more than 700 feet to a valley temple that would have been located on the shores of Abusir Lake.

More than 107,640 square feet of valley, temple, and causeway were decorated with fine relief carvings. The temple and pyramid are noted for the fine construction materials used, including alabaster, basalt, limestone, and granite.

Sahure’s complex also contains artwork showing Syrian brown bears, depictions of defeated enemies, examples of platform columns (which became standard for temple columns after this period), treasure ships arriving from Punt, and extensive painted reliefs. The temple complex had a clear impact on the evolution of Egyptian funerary practices and art for centuries to come.

The pyramid of Neferirkare was originally constructed as a step pyramid, even though the Egyptians had moved on to true pyramids by this point. The limestone cladding used to convert the pyramid to a true pyramid was done cheaply and has collapsed; the “steps” of the pyramid are clearly visible above.

Neferirkare’s pyramid is important for what was found adjacent to it — an enormous set of papyri collectively known as the Abusir papyri. The Abusir papyri are important for two reasons. First, they represent the earliest known example of the Egyptian hieratic script, which is important for dating other archeological finds. Second, they contain information on the administration of a Pyramid temple and the duty assignments of the priests in question.

Religion was central to every aspect of Ancient Egyptian life, from birth to death, and finding papyri from this early stage in Egyptian history informed our understanding of these cultural practices.

Unas’ pyramid — or, if we’re being honest, “heap of rocks” at this point in history — contains the first example of what are now known as the Pyramid Texts — the religious spells and inscriptions that were used to safeguard the Pharaoh on his journey between this world and the next. The spells contained within covered every aspect of the Pharaoh’s journey, from spells of protection for his body to those intended to call upon the gods for aid. They detail the rituals that were used by the priests to consecrate the body, including the critical “Opening of the Mouth,” ceremony, which was believed to be essential to the deceased’s ability to eat and drink in the afterlife. A translation clipped from a larger passage follows:

(The akh was the component of the soul which survived death and mingled with the gods thereafter).

Unas’ pyramid texts are the smallest of the Pharaohs, but provided the standard all later tombs followed. Reading the language of the Pyramid Text, there’s a sense of the religious meaning behind the words, even across the thousands of years that separate us from the priests who would have spoken these words. They intended for their spells to protect and guide the soul of the Pharaoh throughout eternity. Their dedication shed light on a culture whose most important religious practices and understandings might otherwise have long since slipped beneath the sands of time. 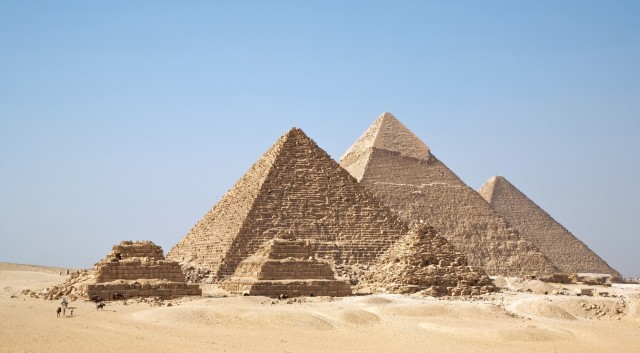 The Giant Void in the Great Pyramid May Be a Vital Construction Clue, Not a New Chamber

There's an alternate explanation for the huge void inside the Great Pyramid — and while it's a bit more prosaic than a secret chamber of riches that hasn't seen the sun in thousands of years, it's no less important.