About 65 million years ago, the age of the dinosaurs came to a dramatic end when an asteroid or comet six miles across fell on what today is the Yucatan Peninsula. The immediate and long-term effects of that impact changed the nature of life on Earth, wiping out dinosaurs and giving our mammalian ancestors a chance to take over. The crater left by that impact, known as Chicxulub, is remarkably well-preserved, giving scientists a chance to test ideas about how these structures form. A new study of the Chicxulub crater reveals how fluid rock leaves its mark following an impact.

People have long known that impact craters like those visible around Earth and on the surface of the moon often have a ring of craggy hills inside the rim known as the “peak ring.” The mechanism that causes the peak ring has been debated for decades, but the leading theory has been that rock can flow like a liquid immediately following an impact. Rock essentially splashes upward like water when you drop something into it. In rocks, it’s called acoustic fluidization.

The impact 65 million years ago caused widespread structural changes in the region — that’s why there are so many sinkholes or “cenotes” on the Yucatan. To test acoustic fluidization theory, researchers took core samples from the Chicxulub crater, the center of which lies just off the coast of the Yucatan. However, it’s under half a mile of rock. Digging down to get samples of the crater allowed the team to build the most accurate model to date of how the terrain changed in the moments after impact.

First, the enormous energy of the impact would have created a bowl-shaped opening 60 miles across and almost 20 miles deep. The sides would have lost their battle with gravity almost immediately, sinking inward and exploding upward in the center to reach a higher altitude than the Himalayas. As the material collapses, you’re left with a peak ring between the center and the rim of the crater. When it settles, Chicxulub was 115 miles across.

The only way this could work is if rock at the impact site was pulverized until it could move like a fluid. Indeed, that’s what the core samples suggested. Most of the material had been fragmented on the millimeter scale. It was not melted, but broken by vast vibrational forces from the impact. Eventually, the rocks settle and regain rigidity to form the characteristic crater structure.

Scientists hope that fully understanding craters on Earth will help us make predictions about craters on other planets. Earth’s craters are subject to erosion, but they’re much easier to access than craters on the moon or Mars. 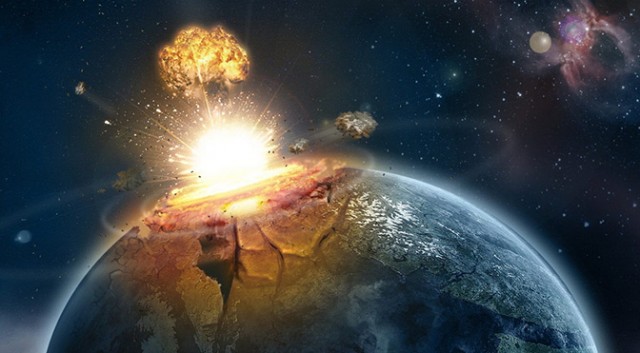 Dinosaur-Killing Impact May Have Superheated Earth’s Atmosphere for 100,000 Years

The Cretaceous-Paleogene extinction event didn't just kick off a short-term apocalyptic winter — it may have turned the planet's thermostat up dramatically for a hundred thousand years.