One of the situations we’ve been tracking on an ongoing basis in 2019 is the adoption rate for Nvidia’s latest GPUs. While it’s impossible to get precise figures, there are signs that Pascal’s exit from the market has improved the situation for Nvidia. Data from the Steam Hardware Survey also confirms that the situation may be improving for Nvidia, in at least in certain SKUs.

Our first data point comes from the bestselling lists at Amazon and Newegg. At Christmas and before, these lists were dominated by GTX 1080 and 1070 cards. The steady release of new cards and the retirement of old ones have changed this, and now only a relative handful of lower-end Pascal cards hold the space. The RTX and new 1660 Ti are taking over the market, as predicted.

In the slideshow below, we’ve compared the relative adoption rates of the two GPU families. First, we’ve compared directly across the market: 1080 versus 2080, 1070 versus 2070, etc. We’ve also included two targeted comparisons that align to price boundaries: GTX 1080 versus RTX 2070, and GTX 1080 Ti versus RTX 2080. The RTX 2060 and GTX 1660 Ti are not included in this evaluation because those cards have not yet appeared in the Steam Hardware Survey. The number of GPUs in the “Other” category on Steam has been creeping up, however, implying they could soon be added.

The x-axis is labeled with numbers instead of months because we’re working with GPUs that launched in different time periods and can’t do a straight month-on-month comparison. The fact that Turing benefits from a Christmas sales cycle while Pascal has not (at the relevant periods contemplated in our timeline) will be ‘fixed’ in three more months. The table below the slideshow summarizes our results. 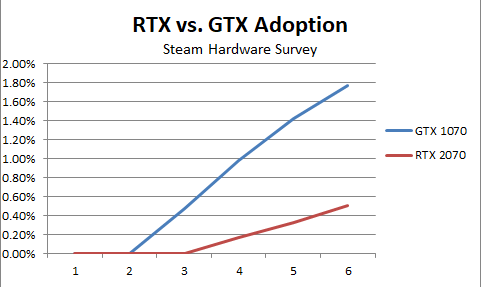 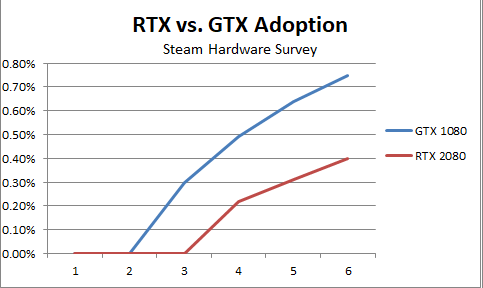 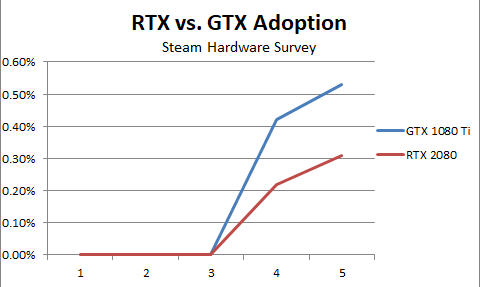 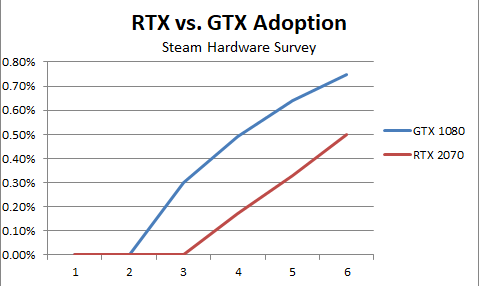 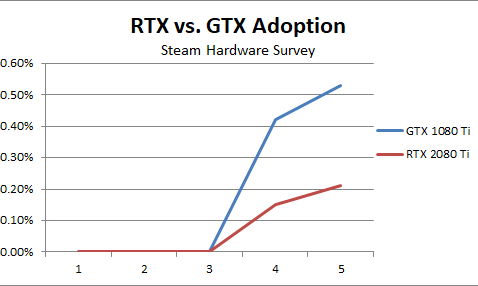 We’ve added the GTX 1080 Ti and RTX 2080 Ti as well, and a comparison between the RTX 2080 and the GTX 1080 Ti. In this case, we’ve had to omit a month from the GTX 1080 Ti — the third month of adoption data for that GPU slams into the August 2017 discontinuity in the Steam Hardware Survey data. The first two months of data show much stronger adoption rates for the 1080 Ti compared to either of the two Turing cards, though the RTX 2080 is in a stronger position.

It is not clear how to split the issues with Turing’s slow adoption against the hammering the GPU market took in the back half of 2018 in general. You can read the slow Turing sales as significantly caused by the slowdown, or argue that the slowdown has been as bad as it is in part because NV raised Turing prices, making Pascal more attractive (possibly as a means of clearing inventory).

Following the recent successful touch and go operation, NASA has reported a sizeable sample of the asteroid has now been locked away in the probe's sample return container.