All that remains of the Tyrannosaurus rex today is a handful of fossils, but how many of these iconic dinosaurs roamed the Earth? A new analysis from the University of California Berkeley estimates that there were about 20,000 adult Tyrannosaurs at any given time during the Cretaceous period. Add that up over millions of years, and there could easily have been 2.5 billion of these dinosaurs in total.

Paleontologists have unearthed only 32 adult T. rex fossils, which is not enough to estimate their range or numbers. Fossils tell us about individual animals — how they lived, how they died, and how they were built. So few animals become fossils that you can’t tell how large a population was just from how many bones are in the ground. However, knowing about the animal’s biology can help make an estimate of population, as long as you’re not looking for an exact headcount.

The researchers, led by Berkeley biology professor Charles Marshall, used tools designed for modern animals to analyze the dinosaur. The core premise of the work is that there is a consistent relationship between large and small animals. For example, there are more rats than there are elephants. We can’t say for certain that the relationship was the same in the Cretaceous, but it’s at least plausible.

For the animals of today, University of California Santa Barbara scientist John Damuth developed a concept called Damuth’s law that uses an animal’s body mass to estimate population density. This calculation has held true for most large carnivorous animals alive today, but it does vary based on factors like metabolism. Scientists no longer believe dinosaurs were cold-blooded, but they weren’t fully homeothermic animals like modern mammals. So, the team used a value between a mammal and Komodo dragons.

That’s how we get to 20,000 adult Tyrannosaurs sharing the Earth at any one time. The number could have been much higher or lower, of course. The calculation shows that 20,000 is the most likely value, but it could have been as low as 1,300 or as high as 328,000. The team reports a 97.5 percent probability the real number was between those two values. This was all before it dropped to zero following an asteroid impact some 65 million years ago.

Marshall himself believes the population was higher, and we just don’t have the data to prove it. Damuth’s law doesn’t work for every species. Jaguars and hyenas are roughly the same size, but the population density for hyenas is about 50 times higher. We might never know how many Tyrannosaurs roamed the Earth, but a precious few were preserved for humans to discover. The new study estimates just one in every 80 million Tyrannosaurs fossilized. 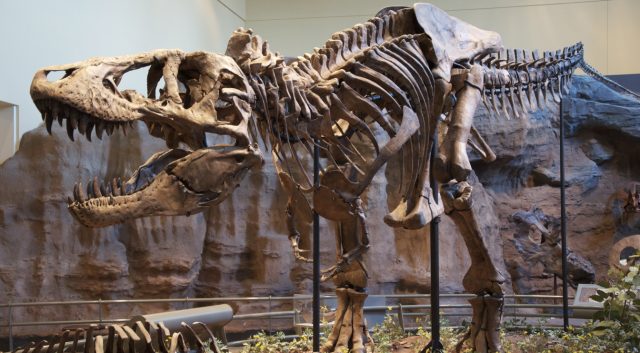 Tyrannosaurus Rex Had an Air Conditioner Built Into Its Skull: Researc