The Hubble Space Telescope was launched in 1990 with an expected design life of 15 years, but it’s well past that now. The iconic telescope just celebrated its 31st birthday, and NASA released a stunning new image to mark the occasion. The photo above shows a star known as AG Carinae, which is one of the brightest in the entire galaxy. Hubble may be getting on in years, but it still impresses.

AG Carinae is about 20,000 light-years away, so it’s difficult to see with the naked eye despite its high luminance. The visible extent of the nebula is about five light-years across in this image, which was captured in both visible and ultraviolet spectrums. To put that in perspective, the nearest star to our own is Proxima Centauri, about 4.2 light-years away. It would take many thousands of years to reach that star with current technology, and the AG Carinae cloud is even larger.

The star itself is at the center of the image, surrounded by a halo of ejected material. AG Carinae produced that nebula about 10,000 years ago during a period of increased instability. That’s expected for rare “luminous blue variable” stars like this one. Through it all, AG Carinae remains a million times brighter than our sun with solar wind rocketing outward at up to 670,000 miles per hour (one million km/hr).

The red material in the image is hydrogen interspersed with nitrogen. You can see a bubble of this gas expanding outward on the upper left of the image. The star’s solar wind managed to punch a hole in the cocoon there, allowing the gas to escape into space. The blue swirls are clumps of dust reflecting light from the star

These stars only last a few million years, but they’re eventful eons. These objects are fighting a constant battle between the outward force of radiation and the inward pull of gravity, but that describes all stars. The difference is that the outward force occasionally overtakes gravity in luminous blue variable stars. Such an event 10,000 years ago blasted off ten solar masses of material into space around the star, leading to the awe-inspiring nebula captured by Hubble.

After erupting, blue variables quiet down for a bit, but the instability will continue to increase over time. AG Carinae in particular still has about 70 solar masses to eject, and it’ll do it eventually. While AG Carinae is quiet now, its variable nature ensures more eruptions are coming in the future. It’s far enough away that you don’t need to worry about that, though. 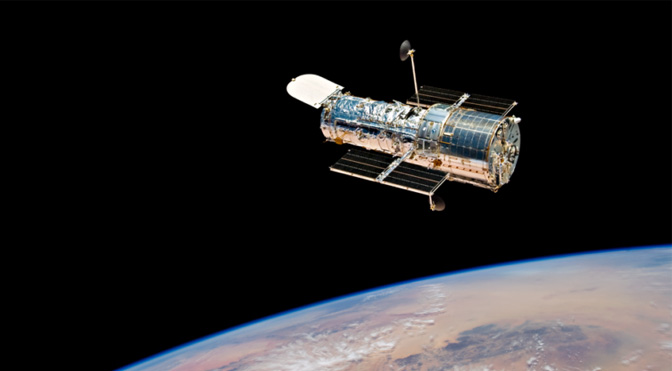 The Hubble Space Telescope has been expanding the bounds of human knowledge for more than thirty years. That's not bad for an orbiting installation built in the 1980s that hasn't gotten a service mission in 12 years. Still, the hardware failures are piling up.