In 2019, the government signed mandating that we develop an itty bitty nuclear reactor by 2027. In compliance with that order, the US Air Force is launching a “microreactor” pilot project at Eielson AFB, in Alaska.

Per usual, the Air Force is playing its cards pretty close to the chest. As of October 27, the Office of Energy Assurance (OEA) hasn’t even announced that they’ve chosen a specific reactor technology. But all evidence suggests that this new installation is part of an energy-resilience effort known as Project Pele. The goal of Project Pele, according to the Dept. of Defense’s Research and Engineering office, is to “design, build, and demonstrate a prototype mobile nuclear reactor within five years.” Three separate development contracts have been awarded, with the final “mature” design submissions TBA.

Project Pele has two main themes: the reactor has to be 1) small, and 2) safe. What we’ve learned from Chernobyl and Fukushima is that failure of the coolant system can have terrible consequences, and in both cases, power failure to the cooling system is what allowed the fuel to become so hot that it entered meltdown. Failure is simply unacceptable. With nuclear power, we also have to consider decay heat and spent fuel disposal. Inability to dispose of hazardous byproducts counts as being unsafe. Even worse, the same stuff we use to make the power can be used to make weapons. But the new Generation IV reactors can further the conversation.

Without getting all breathless, I want to talk about one of the three designs likely being put forth in particular. One of the commercial contractors chosen to submit a design is a domestic outfit called X-Energy, whose higher-ups come from NASA and the US Department of Energy. Its CEO, Jeffrey Sells, previously served as Deputy Secretary of Energy, and founder Kam Ghaffarian operated a NASA service contractor that supported the former Mission Operations Data Systems at Goddard. The X-energy model is a Gen IV high-temperature gas-cooled pebble bed reactor. It uses TRISO fuel pellets or “pebbles” (TRISO stands for TRi-structural ISOtropic particle fuel) loaded into a column that’s then flooded with a heavy, nonreactive gas. And the whole thing is absolutely tiny: X-energy’s website describes their reactors not as building sites, but as modular products, shippable using existing road and rail.

The pebble-bed model used by X-Energy is clearly meant to specifically address many known failure points of nuclear power production. Whether it actually delivers on that promise is yet to be seen, because this is all still in the planning stages, but the design principles are there. First and worst is meltdown, which X-Energy is mitigating via the composition of the fuel itself. The TRISO pebbles are made of granules of uranium oxycarbide the size of poppyseeds, layered with pyrolytic graphite and embedded within a silicon carbide firebreak. The whole thing is the size of a cue ball.

Silicon carbide is what NASA uses in the heat shielding for numerous spacecraft. It’s tough stuff, very strong under pressure, and very difficult to melt. Carbides aren’t melted and cast like regular metals, because their melt points are higher than any other metal. Instead, uranium oxycarbide is created using spark plasma sintering. TRISO pebbles are also passively governed by a negative-feedback mechanism that starves the fuel of neutrons as the temperature rises, independent of any active or mechanical control. Higher temperatures mean falling reaction power, enforced by the nature of the material itself. It’s hard to have a meltdown if your fuel just… won’t melt.

Explosions also present their own set of dangers, including particulate from burning fissile material or graphite shielding. In this design, the reaction is held at temperatures far above the annealing point of graphite. This prevents stray potential energy from neutron bombardment from getting “stuck” in the graphite’s crystal lattice and eventually escaping in an uncontrolled burst, which is what happened in the Windscale fire. Pyrolytic carbon can burn in air if it’s also in the presence of enough water to catalyze the reaction, but there is no water-cooling loop, which prevents a steam explosion.

The use of uranium oxycarbide instead of uranium oxide or carbide is intended to reduce the oxygen stoichiometry; carbides are strong under pressure but not under expansion, so the oxycarbide should produce less gas under decomposition. That means that even if one of the carbide pebbles should rupture, smothered in the heavier-than-air gas, it won’t catch fire. The coolant never leaves the gas phase. The design relies on simply placing a critical mass of fissile material inside a gas-cooled reaction vessel, where it will go critical on its own. They’re just sitting a bunch of angry jawbreakers in the bottom of a tank, where they irritate one another into producing energy. Instead of shutting down to replace fuel rods, in pebble bed reactors, at regular intervals a pebble is collected from the bottom of the container by way of gravity, tested, and recycled to the top of the column.

Once fully operational, the reactor will produce between one and five megawatts. That’s quite small for any power plant, and even more so for a nuclear plant — nuclear plants are often rated in the hundreds of megawatts or even the gigawatt range. At five megawatts it still barely clears a third of the Eielson base’s gross energy budget. But the micro-reactor isn’t being installed so that it can handle the base’s power consumption. This is a proof of concept, for both a reactor design that fails toward safety, and a portable source of radiant energy that doesn’t require a constant external material supply.

One serious weak spot this reactor could address is the way the armed forces get power in the field. For example, in Iraq and Afghanistan, the military used fuel convoys to truck in diesel to their installations, which ran on diesel generators. But generators are loud, dirty, expensive, and prone to breakdowns. They are also a hazard to human health: fuel-burning generators produce dangerous fumes and super-fine particulate. Furthermore, the convoys themselves were low-hanging fruit for insurgent attacks. All of this requires maintenance and lots of security. Much of the reason Eielson was chosen over any other site comes down to its reliance on fossil fuels that have to be transported in, like coal and diesel. The armed forces have a direct strategic interest in weaning their operations off petroleum fuels, to the extent they can.

What benefits the military, though, often ends up also improving civilian lives. Eielson AFB is only about a hundred miles south of the Arctic Circle. During the heating season, the base can burn 800 tons of coal every day. Like much of Alaska, it is beholden to energy supply lines prone to failure exactly when they’re most needed. Most of the state uses coal or diesel to provide electricity and heating. Much of Alaska is also only accessible by boat or plane. Juneau doesn’t even have a road connecting it to the outside world, because the terrain is so uncooperative. One failure point can easily line up with another. Eielson’s northerly location, along with its inexhaustible need for fuel, make it an excellent sandbox (snowbank?) for field testing the microreactor. Greater Alaska is also keenly interested: According to the Anchorage Daily News, “a cost-effective 1-5 MW power generator that doesn’t require refueling could represent a sea change for rural power in our state, as that range covers the needs of dozens of villages off the road system that currently have some of the most costly power in the state — and which are vulnerable to generator breakdowns in the dead of winter, when the consequences can be life-threatening.”

The issue of waste disposal remains unresolved. Shiny and chrome though these pebbles may be, they still embody about the same radioactivity per kilowatt hour as spent conventional fuel — it’s just spread across a larger volume. While this makes any generated waste hypothetically less awful to handle, there’s more of it, and that complicates the already manifold problems with waste handling and storage.

Final designs are to be chosen in fiscal 2022. From there, the DOD wants a reactor up and running by 2027. 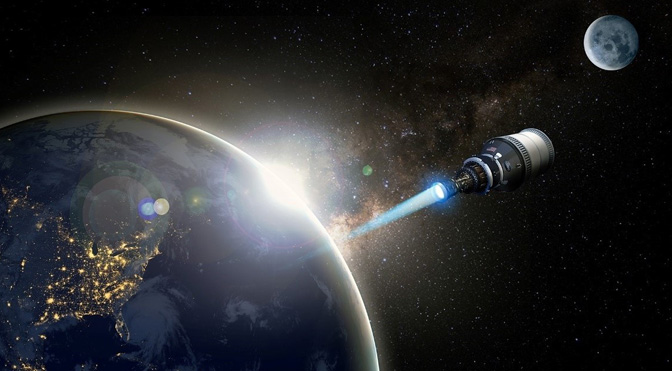 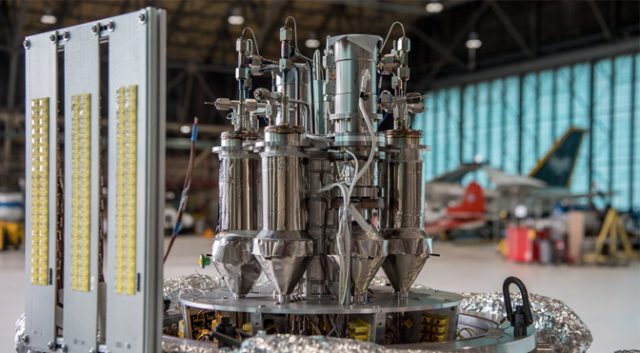 It's called KRUSTY (Kilopower Reactor Using Stirling Technology), and it's being ramped up to full power in a few weeks. 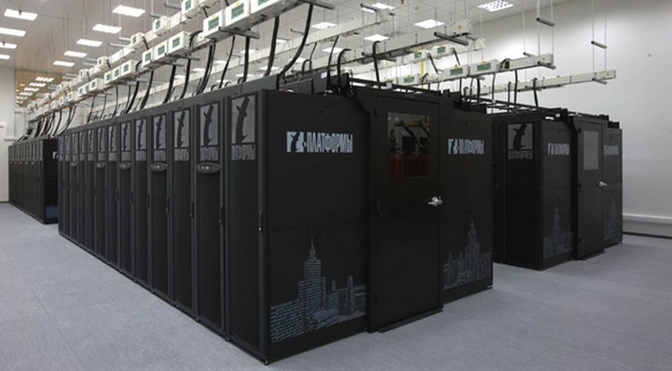 Several Russian scientists working in one of the country's most secure research facilities thought they could use the in-house supercomputer to mine some coins.