For the past year, AMD has been busy rolling out multiple waves of Ryzen hardware. From high-end consumer desktops, to 16-core enthusiast and workstation designs, to its new APUs for the budget-conscious enthusiast, AMD has been firing on all cylinders for the first time in, well, a very long time. Now the company is pushing ahead with another set of parts, this time intended for the embedded market.

AMD is announcing two new embedded families today: The Epyc 3000 series, an embedded solution that builds off its server family of chips and the Ryzen V1000, an embedded APU with a Vega 11 GPU inside it.

One thing to know is that the image above is a representation of an eight-core CPU. A 16-core CPU would use the same cluster of two eight-core SoCs with two dummy cores to provide heat spreader stability. There are, however, certain differences between a Threadripper or Ryzen CPU and these chips. For starters, AMD doesn’t enable 10GigE networking on its desktop parts, but clearly baked it into Epyc from Day 1. Other features, like the high PCIe 3.0 lane counts or the quad memory channels are identical to what Threadripper offers.

Next up, we’ve got the Ryzen V1000. Based on the recently released Ryzen 5 2400G, this chip combines a formidable graphics core with solid CPU performance. Depending on your multimedia needs, the Ryzen V1000 should drop neatly into place.

Below, we’ve compiled AMD’s various performance claims and market SKUs. You can click on each slide to open it in a new window. 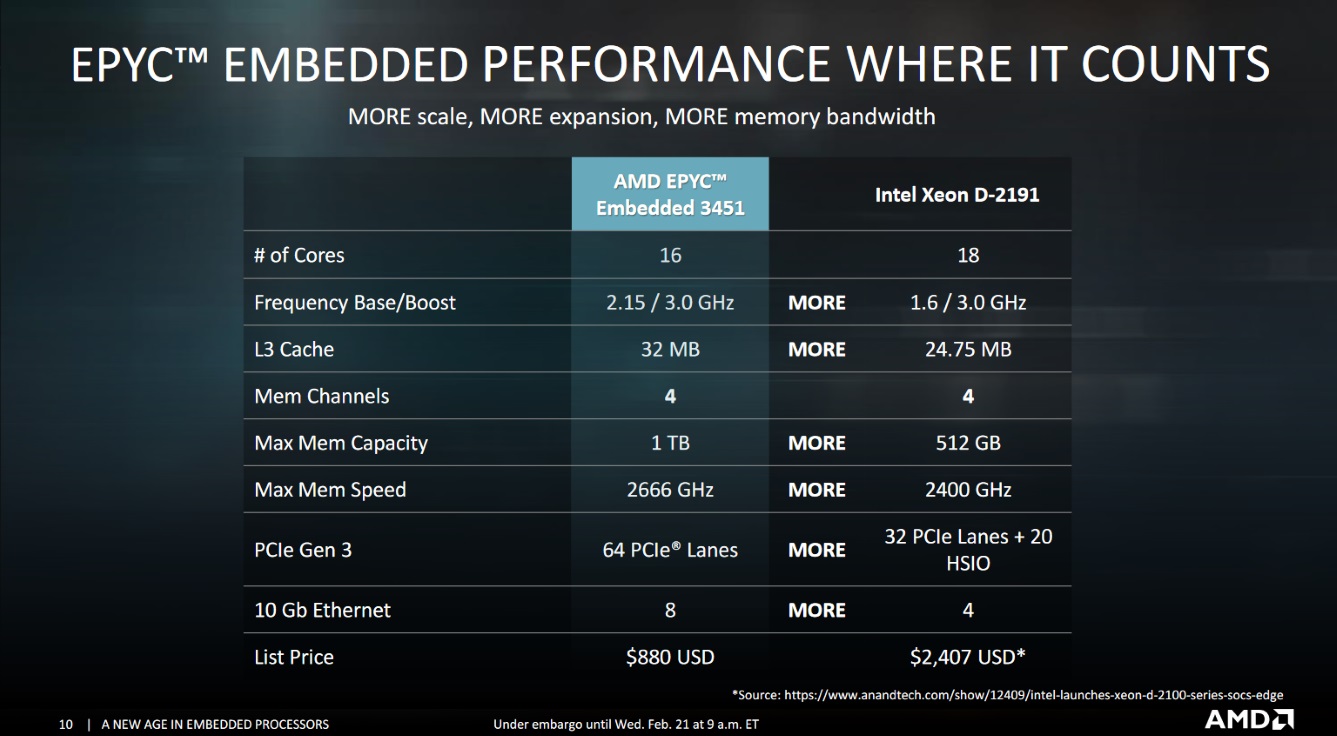 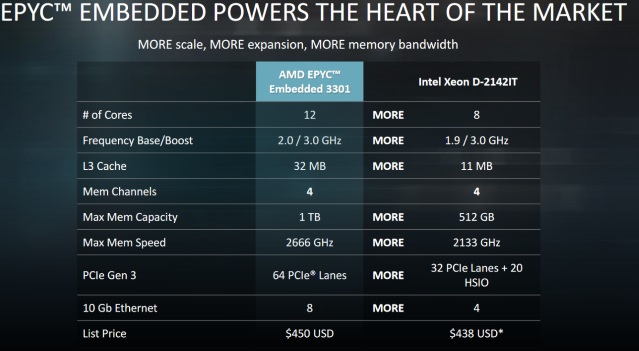 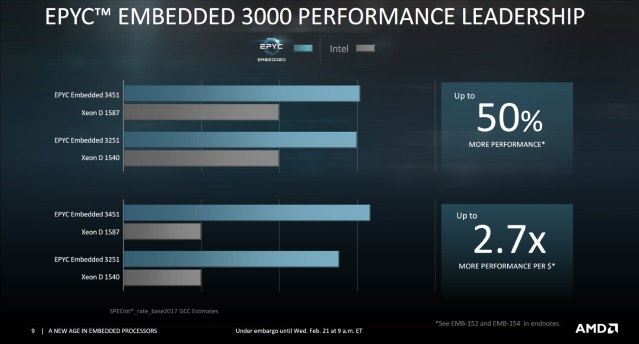 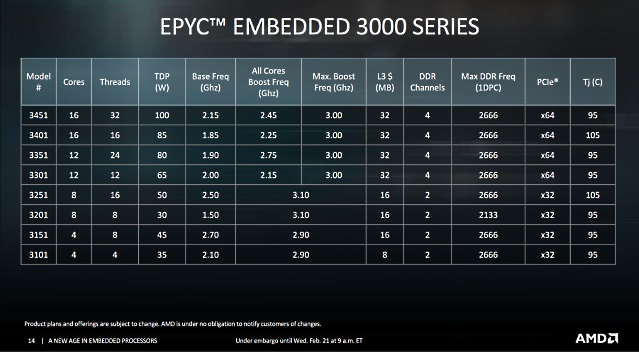 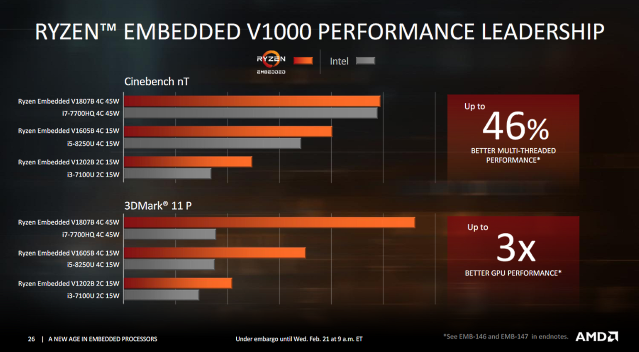 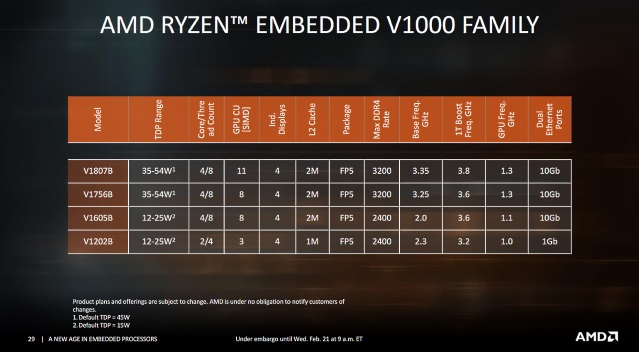 It’s an impressive showing for AMD, all the way around. When the company isn’t outright challenging Intel in sheer performance, it delivers far more computing horsepower per dollar than its much larger rival.

How Important is Embedded to AMD’s Long-Range Plans?

Right now, AMD’s server market share is still minuscule and the embedded market doesn’t traditionally ignite a lot of excitement in the broader user community. Both of those facts are starting to change, however, particularly as more and more companies look to deploy cloud services and edge computing (so-called because it happens at the edge of the network) is a rapidly growing market. Cloud computing, machine learning, and artificial intelligence are all major growth markets these days, and AMD believes the Ryzen V1000 or Epyc 3000 can be a major part of that.

Overall price and positioning look solid. The Epyc Embedded 3451 may not be as fast as the Xeon-D 2191, but it features higher base frequencies, higher RAM capacities, higher official DRAM speeds, more PCIe 3.0 lanes, and 8 10GigE ports, all for $880. The Xeon-D 2191 has a list price of $2,407. It’s not hard to see which chip presents the better price/performance ratio.

AMD is playing rather canny in its embedded and server market. Instead of trying to beat Intel in absolute performance at every price point, it’s offering similar performance at a much lower price. Even if we assume the Xeon D-2191 is 1.3x faster than the Epyc 3451, it’s also 2.74x more expensive. That’s not a favorable ratio, and comparing these two chips alone ignores the fact that AMD has a 12-core CPU priced at $450 compared with an eight-core Intel Xeon-D. There’s a TDP difference — 95W for AMD, 65W for Intel — but if your cooling system can handle it, AMD is going to deliver better performance overall. A 50 percent gap in available cores is tough to close, especially when the Xeon-D-2412IT has the same boost clock and a slightly lower base clock.

AMD seems bullish on its efforts to pick up more market share for the Epyc 3000 and Ryzen V1000 family. We won’t know for awhile if the company succeeds, but they seem to have a solid combination of higher performing chips and better price/performance ratios.