When Intel launched Coffee Lake last summer, it led with a relatively anemic lineup of desktop and mobile parts. The company is changing that today, and with a vengeance. Starting today, if you like Coffee Lake, there’s a great deal more of Coffee Lake to like, including new Core i9 CPUs available in mobile for the first time ever.

All told, Intel is launching 11 new mobile CPUs, new Optane branding, a bevy of new desktop chips, and new chipsets. We’ve rounded the new cores for desktop and mobile up in the slideshow below; you can click on each slide to magnify it. 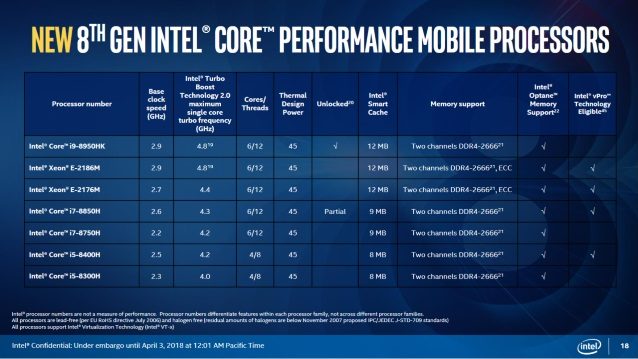 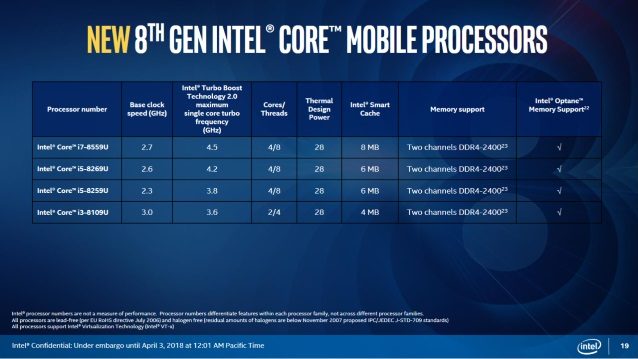 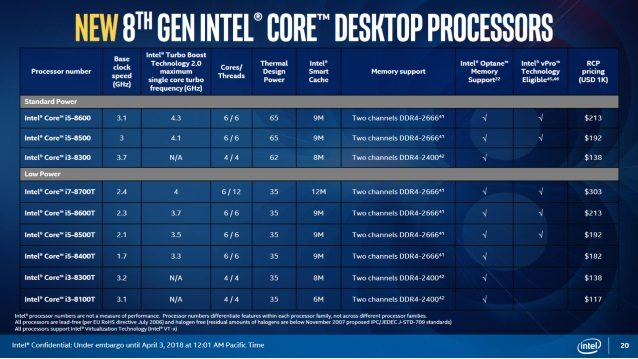 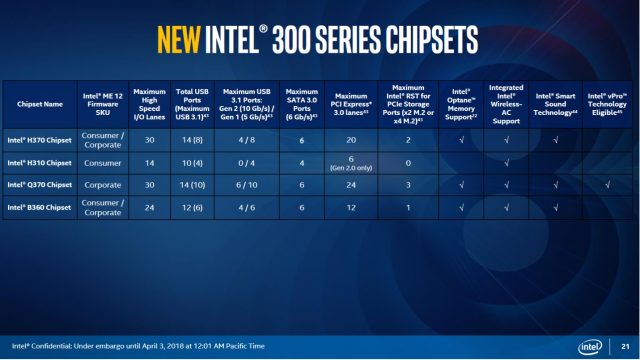 At the top of the stack you’ve got the Core i9-8950HK, an unlocked CPU with a 4.6GHz standard Turbo Boost frequency and a 4.8GHz Turbo Boost using what Intel is calling “Thermal Velocity Boost.” This is a new, higher-clocked single-core frequency that will only kick in if the CPU is running below 53C.

As is typically the case, the Core i9 on mobile is a very different beast than its desktop counterpart. On desktops, the i9 family packs features like four memory channels. In mobile, it’s still a dual-channel configuration. This, along with the lower TDP inherent to mobile chips, will likely limit scaling to some degree. Only the Core i9-8950HK is unlocked; the Core i7-8850H’s partial unlock allows for DRAM overclocking and a 400MHz CPU overclock, but not more.

We can’t say much more than that about how the Core i9-8950HK will scale because Intel continues its execrable policy of refusing to reveal turbo frequencies, claiming that this information is “proprietary to Intel.”

There’s no question that there are specific details of Intel’s CPU implementations that are proprietary to Intel, but the idea that its core frequencies qualify under that label is simply absurd. Intel has had no problem letting its motherboard vendors change Turbo frequencies at will. Vendors will commonly attempt to set a maximum all-core turbo frequency that corresponds to the highest defined single-core frequency Intel offers, even when this can easily cause stability issues.

These settings matter and they vary from chip to chip. Pretending that this information is somehow proprietary is nothing but a dodge to avoid releasing information that consumers might use to make more informed choices.

Moving on from the Core i9 — Intel’s new 28W chips all feature higher-end EDRAM graphics solutions with 128MB of EDRAM. Both the Core i5 and Core i7 CPUs in this family are quad-core / eight-thread, but they’re still Coffee Lake, not Kaby Lake refresh parts. In these CPUs, the EDRAM cache is effectively serving as an L4 cache and can be used for more than just graphics workloads.

Finally, there’s a new range of desktop chips, mostly filling holes in the earlier Coffee Lake lineup. Unfortunately, Intel continues its trend of selling lousy integrated GPUs into this space. If you’re trying to beat the desktop graphics price crunch with an integrated solution, the Ryzen 5 2400G remains the only plausible option.

Intel is also launching new chipsets with these processors, though there’s going to be a split between users who bought Z370 and the newer hardware. If you bought a Z370, you have no USB 3.1 Gen 2 ports from Intel and no integrated onboard Wi-Fi provided by the PCH. If you buy a new board using the H370, Q370, B360, or H310 chipsets, you’ll get both of these features.

Anandtech has additional chipset details and a breakdown of the rather confusing way Intel’s 8th generation CPUs are split between 14nm+, 14nm++, and an as-yet-unknown 10nm refresh from Cannon Lake. This is one area where Intel has unaccountably gone downhill in the past 12 months — from its Xeon branding to its 8th-generation superfamily of parts, Intel seems to be trying to find its footing.

One last thing to tidy up: Systems equipped with Optane will now feature a + after their name. Core i9+, Core i7+, etc. vPro support is also now called out on the badge as well.

The good news for Intel buyers is that these chips are well-positioned, even if the branding is sometimes a bit uncertain. While there are a few places where we’d have preferred to see updates, like a GT3e graphics configuration in a socketed desktop CPU, almost anyone upgrading to Coffee Lake is going to get a significant performance boost from doing so. Whether it’s thanks to higher core frequencies, core counts, or new features like integrated Wi-Fi for desktops, Coffee Lake’s overall feature set is strong.