A bit more than two years ago, a pair of astronomers made waves when they suggested that the orbits of a group of trans-Neptunian Objects, or TNOs, might be evidence for the existence of an undiscovered planet in our own solar system. This hypothesized world, dubbed Planet 9, would be approximately 10x the mass of Earth, 2-4x its diameter, and would have an elongated orbit that takes as much as 15,000 years to travel once around the sun. Now, however, a different group of researchers has put forward a theory that doesn’t require Planet 9 to exist at all. Instead, they posit that a dense enough group of trans-Neptunian Objects (TNOs) may have collectively created some of the same orbits we see today, without the need for a Planet 9.

To review: The primary evidence for the existence of Planet 9 is the large number of TNOs with highly unusual orbits within our solar system. The image below shows the orbits of a number of these TNOs, with the hypothetical orbit of Planet 9 in gold.

The basic argument for Planet 9 is that the similarly unusual (or unusually similar) orbits of this (relatively) massive group of objects implies they’ve been acted upon by a still-larger object. But Ann-Marie Madigan, an assistant professor in the Department of Astrophysical and Planetary Sciences at the University of Colorado Boulder, has a different argument. Some of the larger TNOs, including Sedna, are considered “detached objects,” meaning they do not have a strong gravitational interaction with Neptune or any other body in the solar system. The abstract from Professor Madigan’s paper reads:

[O]bservations suggest that there is a large population of detached TNOs that have a dynamical history different than that of the objects scattered by Neptune. The physical mechanism by which these massive minor planets become detached is currently unknown. However, we have discovered a phenomenon, driven by differential precession between TNOs of different masses and mutual secular gravitational torques, that naturally detach massive minor planets. This mechanism could have notable consequences for the outer Solar System and may shed some light on the origin of the detached population of minor planets near the Scattered Disk.

The smaller TNOs may move much more quickly than the handful of large TNOs, according to Space.com, causing them to bunch together. This bunching effect would then reshape the paths of the larger TNOs as those bodies approach. Over time, this could have caused the larger TNOs with their unusual, highly elliptical orbits, to “detach” from the rest of the solar system. The reason this potential explanation hasn’t been explored much before now is that attempting to model the gravitational interactions of hundreds of TNOs, across millions to billions of years, tends to be computationally intensive and unnecessary when considering the overall evolution of the primary solar system.

Madigan does note that her own theory isn’t as good a fit for all of the observed conditions as Planet 9 is. There’s no explanation for why the orbits of the various detached TNOs all tilt the same way, for example. Planet 9, on the other hand, would explain this. And her own theory requires the existence of a much larger number of small TNOs than we’ve historically observed, though our own limited telescopes may explain this discrepancy. Sedna itself was only discovered in 2003, while the second-largest (by volume) and most massive dwarf planet, Eris, was found in 2005. We’re still researching the farthest reaches of the solar system — and still hunting for Planet 9, if it’s out there to start with. 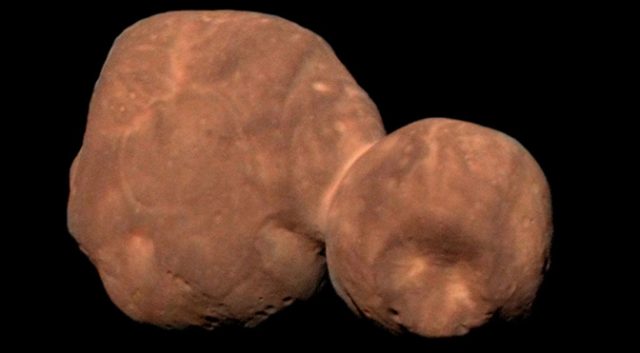 New Horizons took a look at a small Kuiper Belt Object (KBO) known as 2014 MU69 early this year. Now, NASA has announced that object has a new name. It's "Arrokoth," a Native American term that means "sky" in the Powhatan and Algonquian languages.