Plenty of solutions exist for flying a drone while looking through an AR or VR headset (we reviewed the Epson Moverio when it came out). But until now, they have all involved compromises in video and control latency — unless you cobbled together your own as a DIY. DJI crossed part of that divide by combining its DJI Glass VR headset with a high-speed video link add-on, but it wasn’t a fully integrated solution with a drone capable of race-level performance. The company has addressed that with its new DJI FPV drone (Combo package $1,299, Fly More Kit $299, Motion Controller $199). We’ve been fortunate enough to have a DJI FPV in-house to fly for a few weeks, and can let you know what we’ve found.

DJI FPV By the Numbers

The DJI FPV is a performance beast. In full manual mode, the company says the drone can reach speeds of up to 87 mph and has a 0-60 time of around 2 seconds. I think that’s roughly the same as the fastest Tesla in its fastest mode. I’m sure we’ll see someone race them soon enough.

Lest that sound kind of scary to fly, the drone starts life in a more mild-mannered “Normal” mode and reacts essentially the same way as any other DJI drone to the controls (although like a car with a more powerful engine, it responds very quickly). In Normal mode, the drone has forward-facing obstacle detection. There is also a “Sport” mode that turns off obstacle detection and serves as a middle ground between Normal and Manual.

DJI has put a lot of work into the drone’s video connectivity. There is a dedicated emergency stop capability — which is important once you start using the advanced modes. The FPV uses DJI’s O3 system for connectivity with the drone and claims a range of up to 10km (which in practice should mean a better ability to fly in noisy environments). The FPV also features an ADS-B receiver, so you’ll get an alert in the goggles if there is an aircraft nearby.

Because it is an FPV drone, designed to be piloted by someone looking through the camera, it only has a 1-dimension gimbal (up and down). The battery pack is beefy, but because of the drone’s high-performance characteristics, its flight time of up to 20 minutes is slightly less than similar, less-powerful models. The headset receives a 1440×810 feed from the drone. It is lower resolution than current VR gaming headsets, which can make it a little hard to read the icons on the screen, but not impossible. There is a flexible IPD (inter-pupilar distance) adjustment, which is great to see. However, there isn’t a focus adjustment, so if you wear glasses to see distance, you’ll need to make sure they fit inside the headset. Mine do, fortunately.

Setting Up a DJI FPV

For the most part, the process should be pretty familiar to anyone who has flown a DJI drone before. You download the DJI Fly app (not the Go app used by the Mavic family), log in, and power everything up. Everything, in this case, includes the headset (which is powered from an external battery attached via cable), the remote (which doesn’t need to physically connect to anything), and the drone itself. Then you connect the headset to your phone, hit Go Fly (assuming all the pieces have found each other), and put the headset on.

Of course, you are now managing a headset, a cabled battery, your phone, and the remote. So it is a little more complicated than simply flying with a remote — especially once you put your headset on. For example, I inadvertently switched the DJI Fly app into playback mode when I stashed my phone in my pocket and put the headset on, so I had to try and juggle everything at once to set it back to Fly mode. Since technically you need a second person to keep an eye on the drone while you fly, there is also a role for them to help manage the devices.

One big improvement in the DJI FPV over previous DJI models is that it’s user-repairable. Using the provided hex key, you can disassemble it and replace individual components. DJI will sell replacement parts directly to owners. That’s especially important if you are going to make full use of the drone’s high-performance capabilities or race it.

If you haven’t flown an FPV drone before, the closest experience I can think of is a VR-based flight simulator. Except that you’re flying in the real world. Unless you’re in line for a jet pack or one of the emerging class of single-person drones, this may be the closest you can get to experiencing personal flight. It’s definitely fun, and at least in my case a little bit freaky. I’m even more in awe of professional drone racers now that I have some experience trying to do even simple maneuvers in first-person. DJI recommends flying their free simulator before even switching to the drone’s more-advanced modes. In any case, if you’re at all tired of your current drone flying options, this is an excellent choice for a new, and different, experience.

If you aren’t already familiar with flying an FPV drone, there are a couple of caveats that go along with any of them. The first is that in the US, and many other countries, you are legally required to have your drone in sight. For an FPV drone, that means a second person with you. Now, I’m not exactly sure how well that person will be able to keep track of your drone if you crank it up to over 80 mph, but presumably, a lot of high-performance flying is done in special circumstances such as pre-cleared drone racing venues.

Second, if you have an issue with motion sickness when using a VR headset, flying an FPV drone may be an issue for you. I don’t know if the problem is the lag time (over 25ms, which is well outside the VR magic window of under 15 ms) or simply that you’re basically messing with your head the same way as if you’re flying in a VR application. Probably some of both. I enjoy VR experiences, but only for about 20 minutes at a time. In comparison, I’m good for one flight with the DJI FPV at a time, but I don’t think I’d want to do two back-to-back, at least not until I get more used to it.

The DJI FPV Is a Work in Progress

The beta application we have been using during the pre-release period is fairly limited. For example, you currently can’t record the headset view, even though it has a microSD card slot. So I can’t really show you what I saw while flying. Of course, you can record on the drone itself, so it’s definitely possible to impress your friends with your awesome flying ability or dramatic crashes.

Speaking of which, DJI has also introduced a cool new motion controller for the DJI FPV. It is essentially a 3D controller that allows the drone to move the way your hand does. DJI is particularly excited that it will create opportunities for new FPV fliers who may not be comfortable with the traditional 2-stick solution. Unfortunately, due to shipping delays, our review motion controller didn’t arrive before the announcement, so we can only speculate on how effective it will be.

Is a DJI FPV the Right Drone For You?

If you’ve wanted to experience the thrill of FPV flying and have the money, the DJI FPV is an excellent way to get started. (FPV flying is really popular locally with high school students, but their budgets are typically a lot less, so they build their own.) For $1,299, you get the DJI FPV drone, non-LCD remote controller, FPV Goggles V2, cables, charger, and one battery. For another $299, you can get two additional batteries and a charging hub. The Motion Controller will set you back another $199. Based on my experience so far, I’d definitely also recommend getting the DJI Refresh insurance. 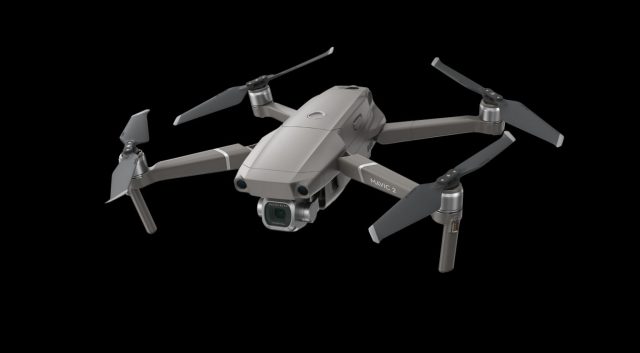 The Mavic 2 Pro upgrades nearly every element of the original Mavic Pro. We put it through its paces and came away with a solid thumbs up.