This post is the sole opinion of the author.

According to Microsoft, Windows 11 will take a substantial step backward relative to Windows 10. Specifically, Windows 11 Home will now require both internet access and a Microsoft account in order to set up the PC.

Speaking as a reviewer, this requirement is ludicrous. I build and wipe testbeds on a regular basis. I am not interested in creating a burner account to handle this task and I do not always need to connect a testbed to the internet. If I am attempting to benchmark the behavior of two specific versions of Windows, an OS that forces me to update to the latest version as a condition of installation literally prevents me from doing my job.

I recognize, however, that I’m a niche case. While I find these strictures annoying, they aren’t problems for your average PC user. And they aren’t the reason I will never log into a Microsoft account in order to use my own PC.

My PC Is Not the Internet

I’m willing to cop to the fact that this may be an artifact of the time in which I grew up. To me, my PC and “the internet” are two entirely different things. I connect to the latter to download files, read news, and watch content, but it is not the totality of my personal computer. Using an online account to log into my personal PC breaches the distinction between the two. Weird as it is — because I’m willing to admit this is a personal oddity — I find that distinction matters to me. It actually matters a lot. I don’t want my local Windows account to be synonymous with an online login.

But that’s not my only reason.

The other reason I won’t use an online account is that Microsoft won’t stop trying to force me to use one.

My problem with Microsoft and non-local accounts is this: Since the introduction of Windows 10, Microsoft has pulled every dirty trick in the book. It has obfuscated the ability to create a local account by hiding it in unclear language. It has deployed installers that hid the option to create a local account unless you were offline when you ran setup. It has deployed “Get Windows 10” tools that were so aggressive, they acted more like malware than a product built by a Fortune 500 company. 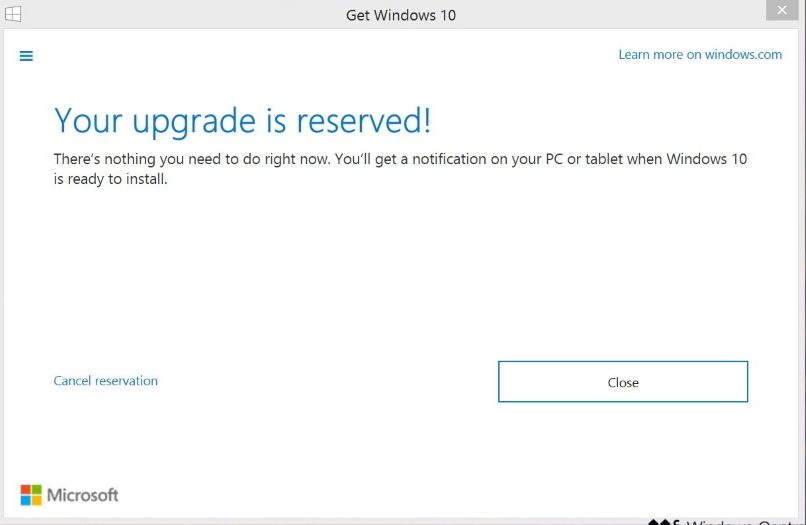 At first, the Get Windows 10 utility was friendly, with a "Cancel reservation" link in the lower-left. Clicking "Close" or the "X" in the upper-right hand corner closed the app. 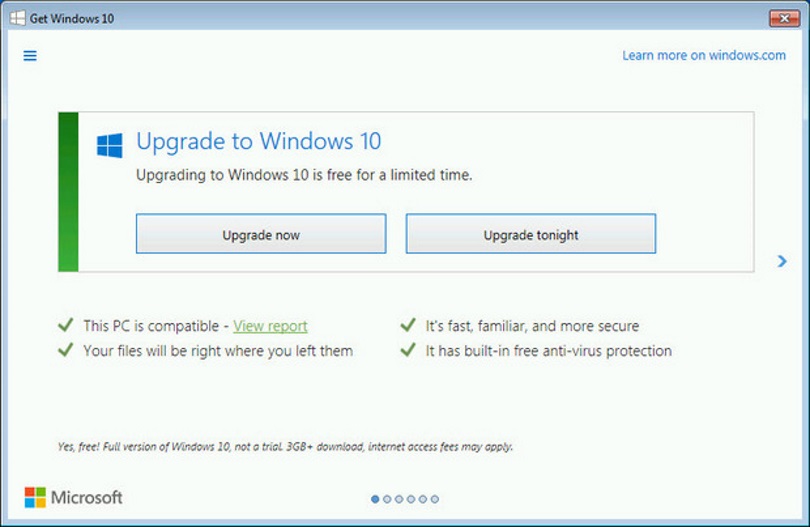 By early 2016, Microsoft had changed the app. The only way to close it was to click on the red X in the upper-right-hand corner. The prominent options were "Upgrade Now" or "Upgrade Tonight." 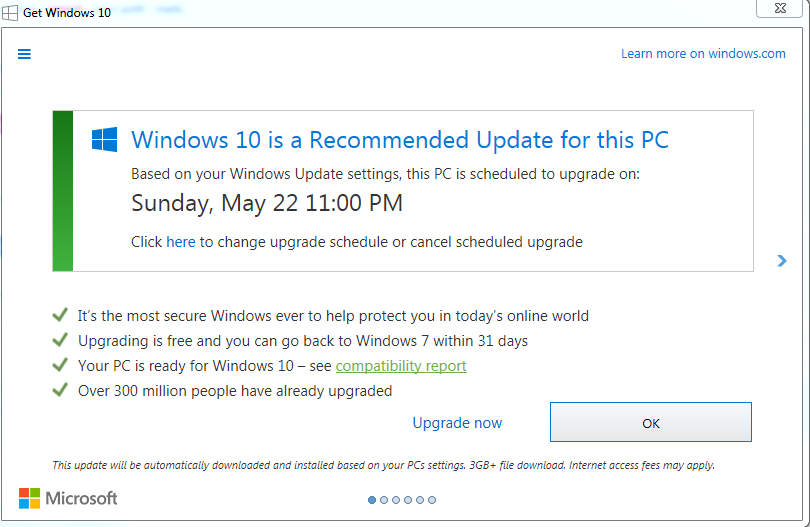 By May 2016, Microsoft had changed the application again. Now, clicking on the white X at the top-right screen did nothing. The end-user's system would still upgrade to Windows 10, even though the end-user attempted to prevent it. This change earned MS a lawsuit and widespread accusations of malware-like tactics. Changing the behavior of the "X" is what's known as a 'dark pattern' — a deliberate subversion of what the end-user expects to achieve the opposite result. 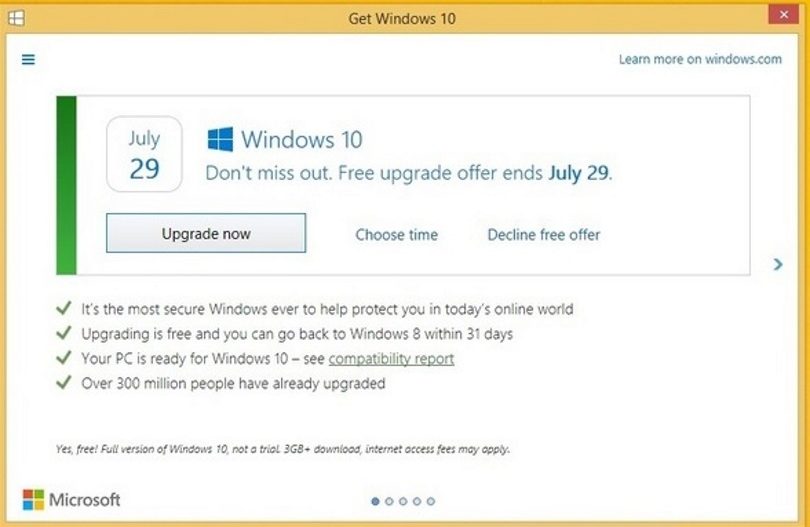 Microsoft's version of the app after it was forced to admit it had shipped malware-like tactics to customers. The red "X" now dismisses the upgrade again. 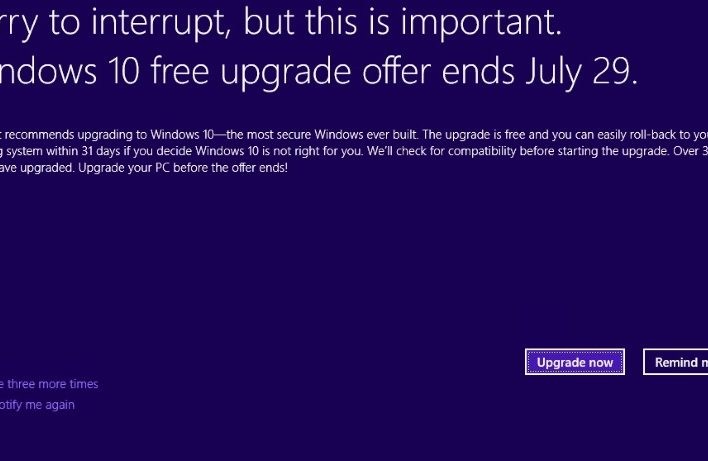 Why should Windows 7 users have all the fun? Windows 8 customers got in on this one as well.

I will not be browbeaten into adopting an online account as a local login because Microsoft found it convenient to gaslight its own users into submission. Had Microsoft offered the option as a feature with Windows 10 and left the issue alone thereafter, I might have switched eventually. But it didn’t. It’s important to Microsoft that you use an online account.

That’s why I’ll never use one.

I don’t know why Microsoft wants everyone to use an online login. I don’t know why Microsoft felt it had the right to treat its customers the way it did with the Get Windows 10 campaign or its six-year battle to push everyone to use online accounts. But I will not play this game. I will not hedge and say “Well, you can actually create a local account after you sign in for the first time and switch to that.” Defaults have tremendous power and Microsoft knows it.

The option to create a Windows login via an online account is great. The requirement to do so is an unacceptable intrusion into what’s supposed to be the user’s personal computer. I am uninterested in joining the Greater Microsoft Data Conglomerate in any capacity beyond the level I’m already forced to participate in and I’m will not reward what I view as borderline abusive behavior with compliance. Companies that intend to treat your data ethically do not grasp for it like a slobbering ambulance chaser.