Pull out your red-and-blue 3D glasses: Ingenuity’s latest, ground-hugging flight has delivered an anaglyph 3D tableau of the Martian landscape. Its mission was to take color images of a specific geological target: a 30-foot hunk of craggy orange rock that the Perseverance team has nicknamed “Faillefeu,” after a medieval abbey in the French Alps. The Mars helicopter made the flight at its lowest altitude ever: 26 feet (8 meters).

Faillefeu is part of a heavily eroded series of rocky ridgelines in the South Seítah region of Mars’ Jezero Crater. It seems pretty forbidding at first glance. These photos feature a lot of unwelcoming sand and rocks ranging in shade from dusty orange to orangeish dust. But Ingenuity was built with the ability to make stereoscopic images, and it’s using Faillefeu to practice. The little copter is busy taking many, many photos, and mission scientists are using those stereoscopic images along with others to make an incredibly detailed 3D map of the Martian terrain.

The 3D image above was created by combining data from two color images, taken 16 feet apart by Ingenuity’s forward-facing color cameras. Here it is without the 3D effect:

Piloting Ingenuity is already tough enough because NASA is doing it without real-time input. Now they have to contend with other problems created by the wispy Martian atmosphere. The space copter has been doing so well that NASA recently extended its mission. Unfortunately, seasonal changes on Mars mean that the very thin atmosphere is getting even thinner. Ingenuity is going to have to change its tactics to stay aloft. Håvard Grip, Chief Pilot of Ingenuity at NASA’s Jet Propulsion Laboratory, explains:

In the coming months we may see densities as low as 0.012 kg/m3 (1.0% of Earth’s density) during the afternoon hours that are preferable for flight.

If the atmospheric density were to drop to 0.012 kg/m3 in the coming months, our helicopter’s thrust margin could drop to as low as 8%, which means that Ingenuity would be operating close to aerodynamic stall (a condition where further increases in the blade’s angle of attack does not produce more lift, only more drag).

Next on the to-do list for the space copter is an even lower-altitude sortie for flight 14, skimming the sand at only five meters up with an even higher rotor speed of 2800 rpm: Ingenuity’s fastest yet. It’s really pushing its limits now. Above this speed, the tips of the rotor blades hit the air at almost the speed of sound. That means still more trouble ahead for Ingenuity. Crossing that threshold would mean a huge increase in drag on the rotors, which would make it much harder to take flight.

Meanwhile, Perseverance has been snapping selfies with Ingenuity and posing in front of its current favorite rock, nicknamed “Rochette.” NASA writes:

A key objective for Perseverance’s mission on Mars is astrobiology, including the search for signs of ancient microbial life. The rover will characterize the planet’s geology and past climate, pave the way for human exploration of the Red Planet, and be the first mission to collect and cache Martian rock and regolith (broken rock and dust).

The samples Perseverance drilled out of Rochette will eventually be returned to Earth by way of collaboration with the ESA. 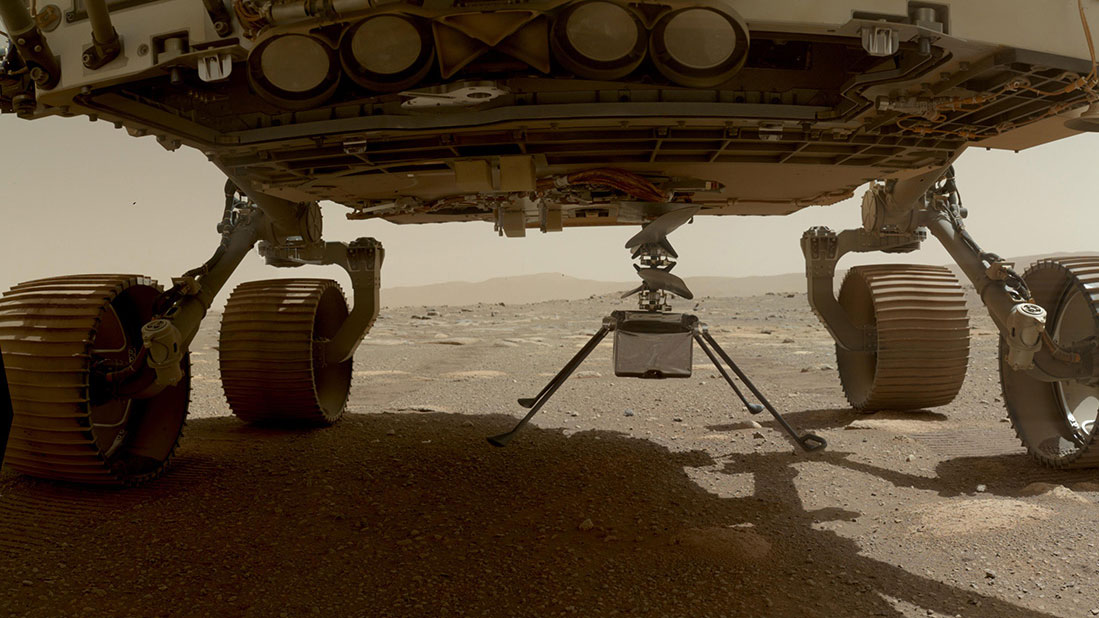 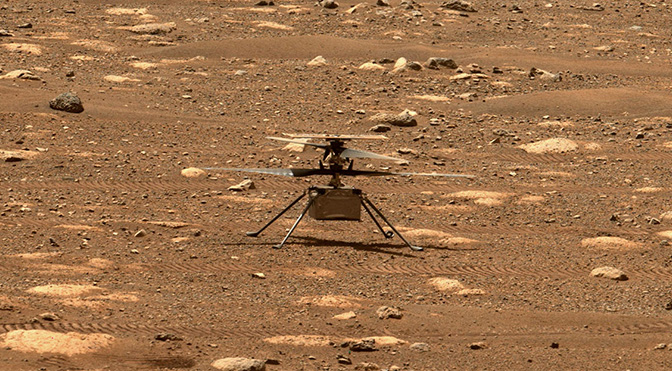 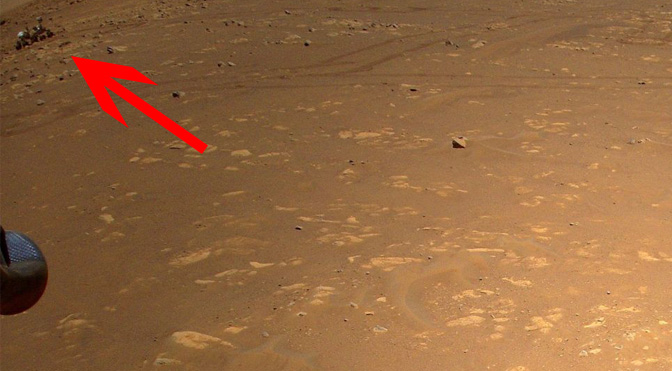 For the first time, we now have an aerial shot of NASA's robotic explorer, courtesy of the Ingenuity helicopter. 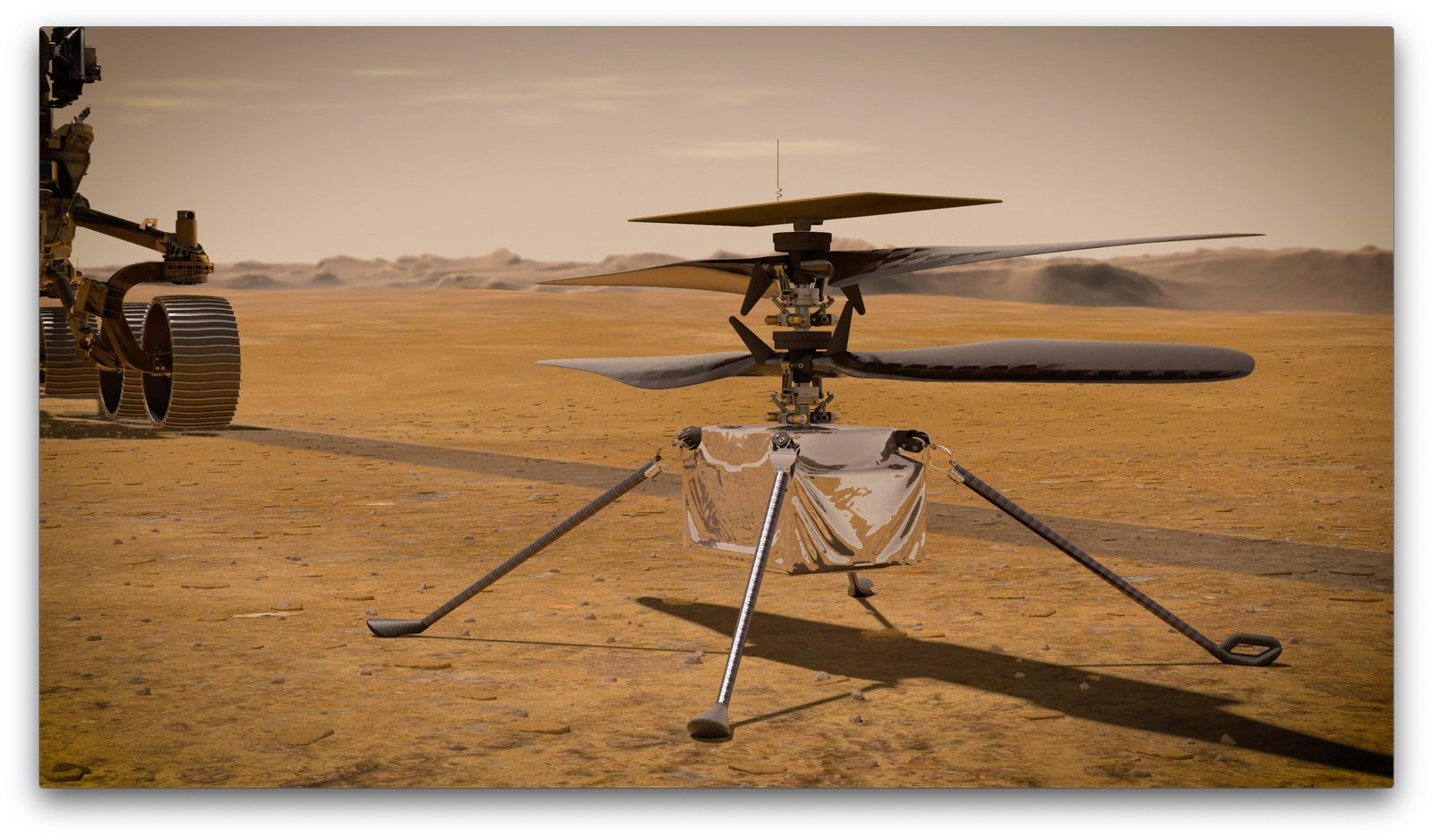