LAS VEGAS — CES was again awash in car technology. There weren’t as many auto-industry keynote speakers as in recent years, but there was certainly more technology, particularly autonomous cars and shuttle vans. In what has become a recent Vegas tradition for car-related shows here, the parking lot just outside the huge Las Vegas Convention Center was turned over to a drifting track. Last fall for SEMA, it was Ford. This year for CES, it was BMW.

Here’s our take on the most important trends in car technology for CES 2018. CES is now the unofficial kickoff of the auto show season. Next week, the focus shifts to Detroit and NAIAS, the North American International Auto Show. 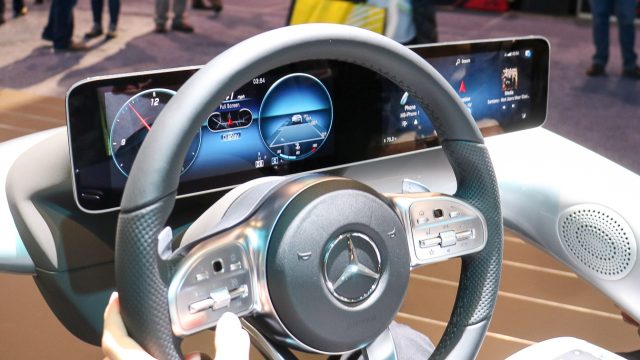 MBUX, the Mercedes-Benz User Experience, is the company's dashboard of the future: two 12-inch LCDs. Steering wheel controls let you scroll left or right, up or down, or within menu choices. The COMAND control wheel is gone, but a big touchpad remains for "legacy" (read: old) users, while touch is for millennials. MBUX debuts on the small A-Class (but not in the US; Americans are too chubby to fit) and in 2019 on USA Benzes. There's also voice but (unlike BMW) no gestures. 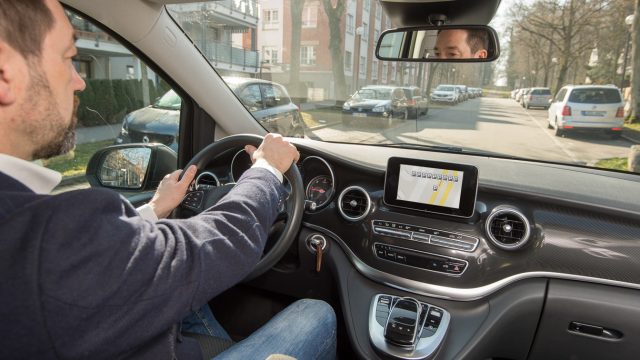 Bosch is one of the mega-suppliers with fingers in many pies, with the goal of making "cities smart and worth living in," says board member Stefan Hargung. A parking assistant (photo) will find spaces in 20-plus US cities this year. "Climo," a box little bigger than a toaster-oven, monitors 12 parameters, such as CO2, temperature, and particulates. A next-generation center stack uses two touch-screen LCDs; it's a bet touch works as well on bouncy roads as in the labs. 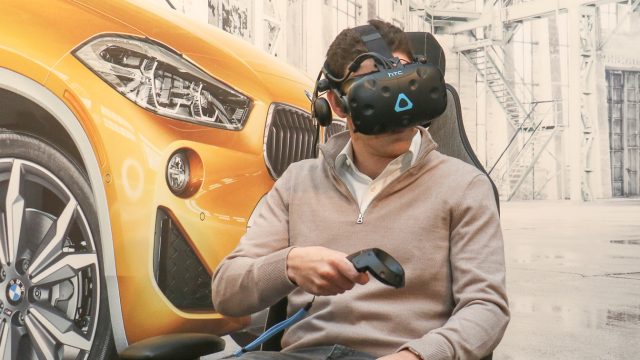 What if your BMW dealer doesn't have the model with your favorite color leather or dashboard trim? Slap on the HTC Vive VR headset, grab the clickable wand, and examine the car inside and out. Want to see how Canberra Beige leather ($1,450) compares with Amaro Brown Merino ($3,700)? Point to any seat, click, and cycle among choices. The Vive headset is surprisingly realistic, although higher resolution would help. 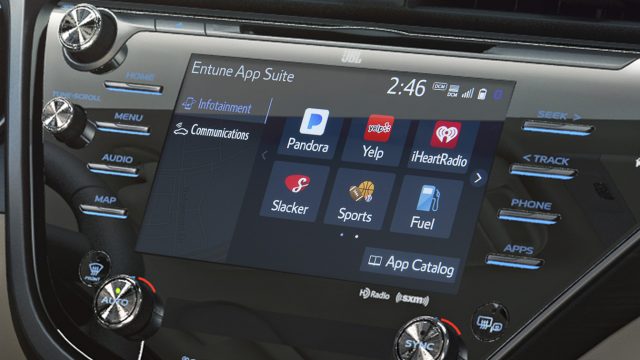 Amazon's Alexa is coming to the dashboard. Toyota will start offering the voice-powered assistant in its Entune 3.0 App Suite and Lexus Enform App Suite 2.0 later this year. BMW, Ford, and Hyundai previously announced Alexa support. Toyota doesn't want to be subservient to the Apple CarPlay/Android Auto juggernaut, thus alliances such as this, or with Automotive Grade Linux (AGL) underpinning infotainment software. 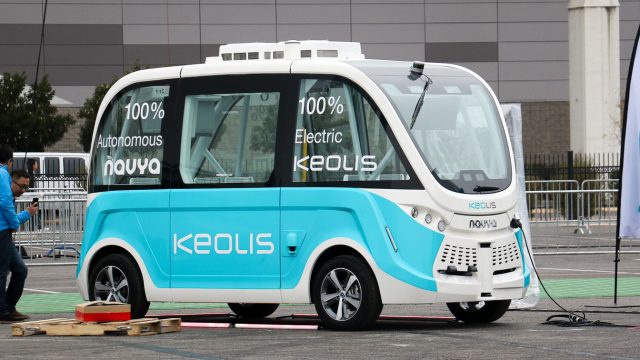 Self-driving cars and vans were out in force. The city that never sleeps closed down the Strip (Las Vegas Boulevard) late one night for a self-drive program. During the day, they mingled with traditional cars. Players included Aptiv (Delphi spinoff), Nanya (shown in photo) with an autonomous tax, Toyota's boxy e-Palette, and a Ford Fusion outfitted to auto-deliver Domino's pizzas (do you tip the car instead?). Intel and Nvidia are fighting to supply the processor power. 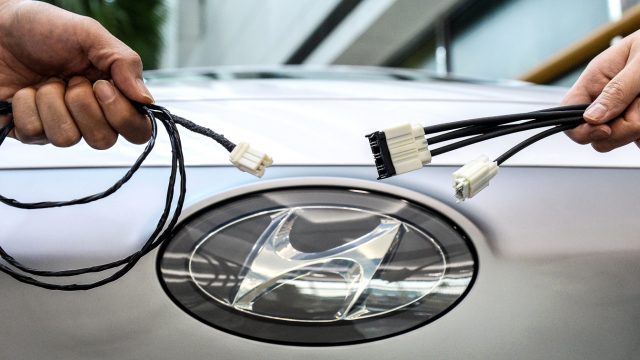 Hyundai and Cisco are partnering to put Ethernet in the car in 2019. The "hyperconnected car" will replace some of the miles of wiring with gigabit Ethernet. The aging CAN bus (controller area network) gets the heave-ho. Automotive Grade Linux (AGL) will be the underlying OS. The Genesis brand goes first, probably connecting the multiple cameras, blind spot detection monitors, radars and displays. Over-the-air upgrades are a given. 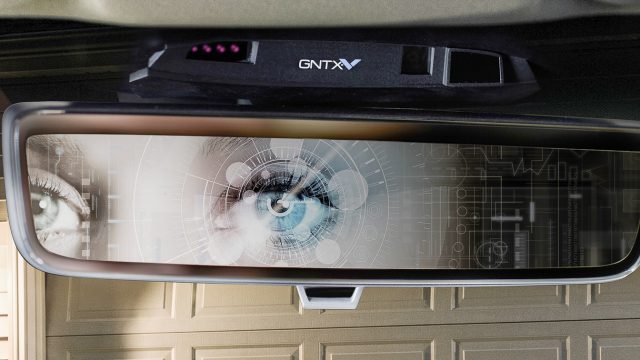 You can forget your keys. But you'll never leave your eyeballs at home. Gentex, the huge maker of rear-view mirrors, can embed an iris scanner that identifies you to the car. It could even authenticate you to the internet and allow, say, vehicle-to-home or vehicle-to-infrastructure transactions: Voice-order a pizza and it's delivered (maybe autonomously) just as you get home. 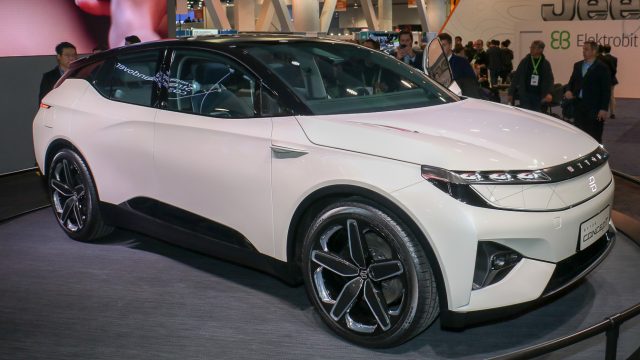 Byton is 2018's EV prototype you maybe never heard of, sort of like Farada Future last year — only Byton is in a less-grandiose show floor booth. The crossover would have two battery sizes, 71 kWh for 250 miles of driving or 95 kWh for 325 miles. Rear drive is standard using a Bosch motor with integrated gearset and inverter. AWD Bytons add a front 150-kWh motor. Not only is software upgradeable, but even (some) hardware is: Byton will swap 4G telematics for 5G when it's ready. The steering wheel has an 8-inch LCD in the middle, with an airbag below. 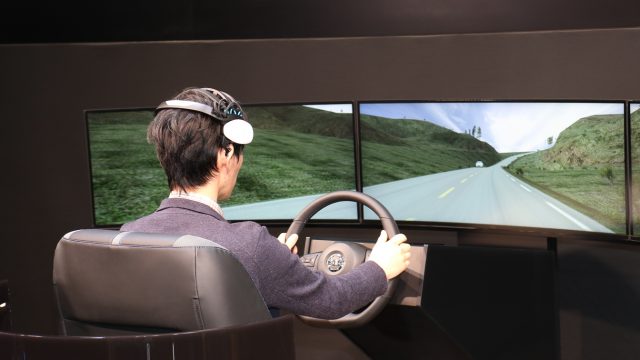 Nissan's B2V — that's "brain to vehicle" — technology reads brain waves, which telegraph what the driver wants to do 0.5 to 1.0 seconds before the driver's hands or feet undertake the action. Knowing that, the car is ready for your next move. Nissan says it's for driver-driven cars (it's not self-driving) and it reads brainwaves from a (removable, of course) skullcap, but NOT your actual thoughts. Fear not if you see a good-looking pedestrian in a tank top. 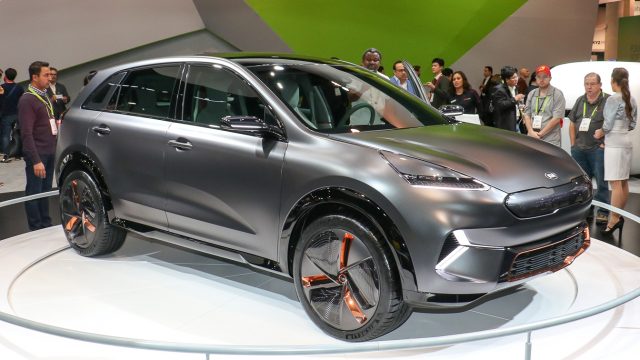 The Kia Niro EV Concept is an EV version of the now-shipping Niro Hybrid crossover. It has a 64-Kwh battery good for, Kia says, 238 miles. That puts it on par with the shipping Chevrolet Bolt EV and the trickling-out Tesla Model 3, albeit with more room. It's also a cousin to the Hyundai Ioniq Electric (smaller battery, 110-mile range). The announcement should scare the traditional auto shows: Kia chose CES, not one of those, for what is the car's introduction.

Over the past half-decade, automotive has been the biggest growth area for the show that CES execs no longer want to be called the “Consumer Electronics Show” (too limiting).

CES has also shaped how the LA Auto Show, held just before or after Thanksgiving, has expanded to embrace the technologies underpinning new cars. Now, CES plus LA have have kickstarted Detroit (held the week after CES) into the 21st century. Beginning in 2017, Detroit offered “AutoMobili-D” as a way to showcase component technologies during press days without getting in the way of the hundreds of cars in the main Cobo Hall exhibition areas. Competition is good for shows, too.