DETROIT — Trucks, trucks, trucks. And SUVs. Oh, plus some cars. The introductions at this year’s North American International Auto Show (NAIAS) were further proof that the US is moving away from sedans. Most of the key introductions were pickup trucks and crossover/SUVs. New versions of two of the three top-selling vehicles were introduced: the Chevrolet Silverado and the Dodge Ram, both pickups, both selling more than a half-million units each last year.

The show also included the third generation of the Acura RDX compact crossover, now designed in the US; another small BMW SUV, this one the X2; and what may be the best Buick ever built: the Toyota Avalon. Here’s our 10 favorite cars shown in Detroit, those with likely customer appeal and solid tech offerings. Plus a couple off-the-wall concepts. 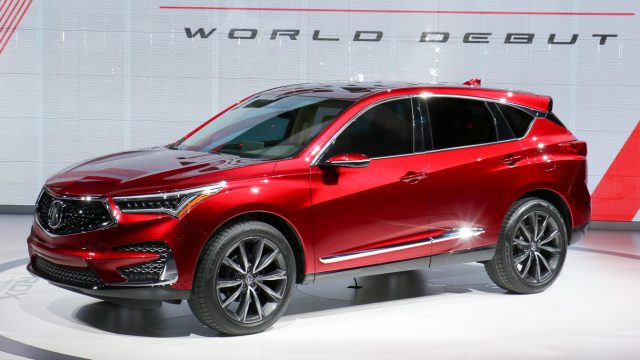 The third-gen 2019 Acura RDX compact SUV returns to four-cylinder turbos, now with a 10-speed automatic. Torque vectoring Super-Handling All Wheel Drive (SH-AWD) is back. The 10.2-inch center stack display is controlled by the True Touchpad Interface, meaning the upper left of the touchpad maps exactly to the same spot on the display. AcuraWatch comes standard, and includes blind spot detection, surround view cameras, parking sensors, and 4G telematics. The RDX has the potential to be best-in-class when it ships in spring. 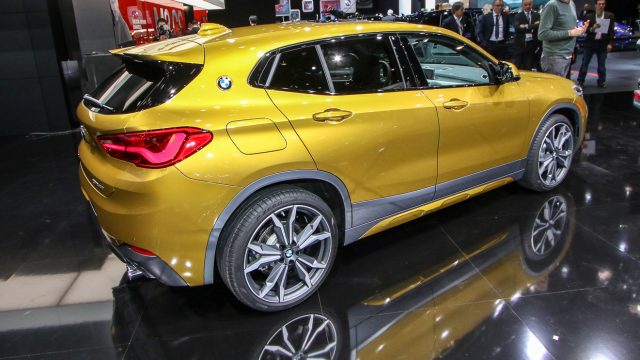 The BMW X2 is the handsomest SUV in BMW's lineup. Also, the most confusing. At 172 inches, it is 3 inches shorter than the X1 and $2,500 dearer comparably equipped. The X2 plays to urban dwellers with limited parking options. Unlike the even-number X4 and X6, there's no space-robbing sloping roof. Prices start at $38,000 and top $52,000, including $1,000 for driver-assist features you get free in most every Honda or Toyota. The X1, X2, and Mini share the same front-drive core architecture. 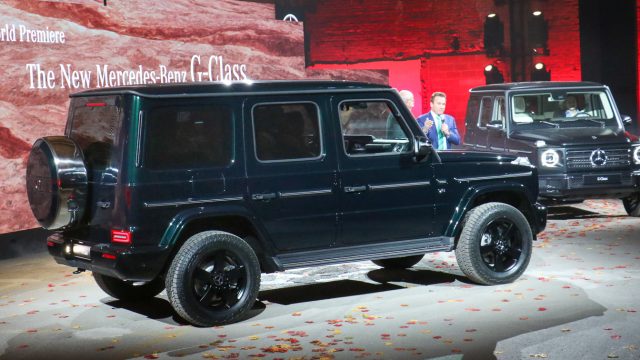 The 2019 Mercedes-Benz G-Class, aka Geländewagen, looks virtually the same as the original 1979 G-wagen: boxy and tall. It has been stiffened and modernized; MB says only three parts carry over from 2018. The ride and performance can be tailored for economy driving (on a 13 mpg vehicle), comfort, sport, or off-road (called G-Mode). The price runs $120,000-$225,000, insuring it remains a must-have among the rich/famous as well as explorers. That's G-wagen owner Arnold Schwarzenegger in the photo. 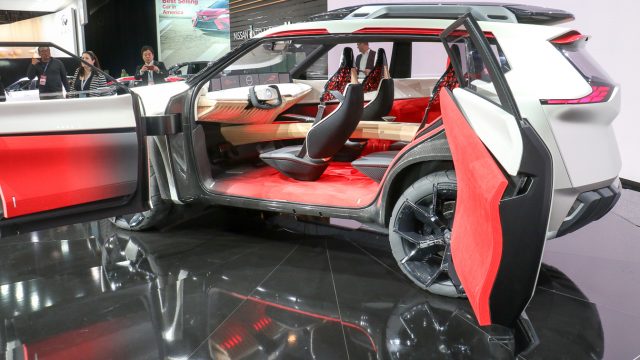 The Nissan XMotion ("Cross Motion") is Detroit 2018's most amazing concept vehicle. Japanese joinery experts built a wood bridge front to back separating left and right bucket seats (to keep the kids from fighting?). A pop-up compartment on the roof adds cargo space. The Michelin all-terrain tires are laminated to the wheels. In front, LCDs run the entire width of the dash. A second-row infotainment controller hovers above the bridge. 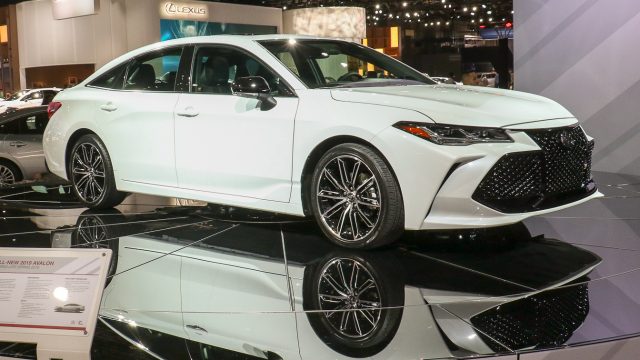 The 2019 Toyota Avalon and Avalon Hybrid will be the first Toyotas to get Apple CarPlay, though Android Auto is not offered. Top trim lines offer adaptive variable suspension and a 10-inch head-up display. The new Avalon is also the first Toyota with connectivity via smart watch and Amazon Alexa. At 196 inches long, it's just 3-4 inches longer than the Camry. But with the rich cockpit trim, it's more of a midsize Lexus with Toyota badging. It's on sale late spring. 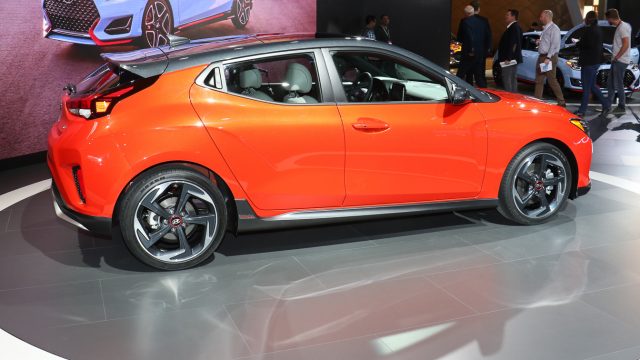 The 2019 Hyundai Veloster adds serious performance, from 145 hp in the base car to 201 hp in the sweet-spot Veloster Turbo to 275 hp in the Veloster N. All Velosters will offer a seven-speed dual-clutch gearbox (or six-speed manual) and torque vectoring using inside-wheel braking. It's available in the spring. The Veloster in Detroit and Nexo fuel cell at CES show forward progress by Hyundai. But buyers really want to see new SUVs: the current Santa Fe dates to the 2013 model year. 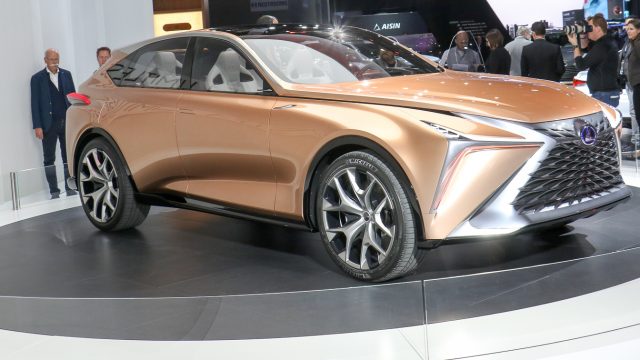 The Lexus LF-1 Limitless concept car is a sleek crossover that hints at how Lexus sees premium SUVs as they overtake sedans. The LF-1 has a chauffeur mode where the driver hands off most of the work. The nav system uses habits and history to anticipate where the driver wants to go. Concepts get higher and less swoopy as they near production, but LF-1 suggests Lexus will trade off cargo room for looks. That's Daimler chairman Dieter Zetsche in back checking out the LF-1. 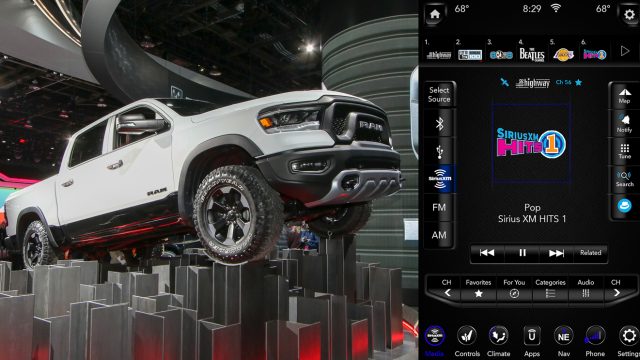 Ram is the most important part of the old Chrysler Corp. The 2019 Ram pickup, due by spring, grows nine inches but loses 225 pounds. The V6 Ram gets a 48-volt mild hybrid system while the V8 has it optional. A 12-inch center stack screen hosts a new version of the UConnect infotainment system. With an availability head start of up to six months on the 2019 Silverado, parent FCA hopes Ram can challenge the Silverado as America's second-best-seller. 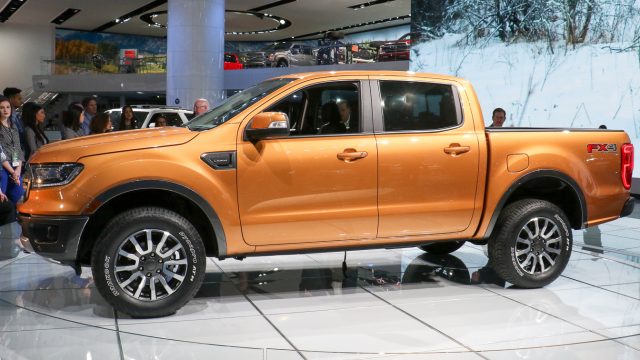 Ford is late getting back to the midsize truck party it started. It sold the Ranger from 1983-2011; the Ranger returns to the US a year from now with one engine (a 2.3-liter turbo four), three trim levels (XL, XLT, Lariat), and two-door SuperCab and four-door SuperCrew configurations. The FX4 off-road package can be added to any model, but it's not F-150 Raptor-level. 4G telematics comes standard. Blind spot detection works with trailers up to 33 feet long. The related Bronco SUV returns in 2020. 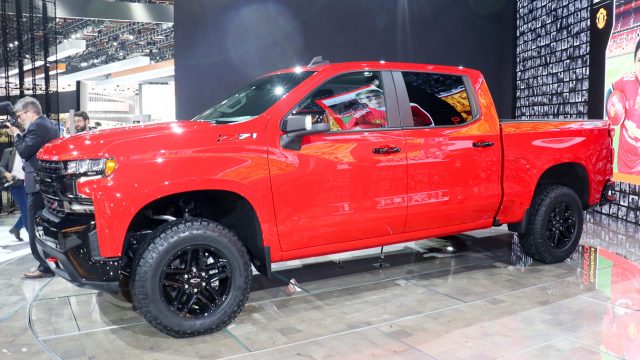 The 2019 Chevrolet Silverado full-size pickup should hit 30 mpg with an inline-six turbo diesel, maybe with some gas-engine vehicles with using Dynamic Fuel Management, or variable cylinder shutdown. The average Silverado is 4 inches longer but 450 pounds lighter, mostly through the use of high-strength steel as well as aluminum. It's on sale in the fall.

The Detroit Auto Show puffs out its chest every January to show how big it is. How big? Answer: pretty big. Just not at dominant as NAIAS was a generation ago. CES, held the week before, again stole some of Detroit’s thunder with both car tech and new-car announcements, and the Los Angeles show got in its licks, too, now that it’s safely settled into a late-November slot. LA and Detroit were more or less on top of each other through 2006, both with early January dates, to the detriment of LA. Detroit would have benefited more (for press days at least) than LA from moving to late November — less chance of snow. But it’s the auto show’s public days that matter most to the show organizers, which are typically the local auto dealers’ association, since they see the dead of winter as a good time to have a show and drive some buyer traffic. Now Los Angeles stands on its own as a top-tier show (but in a cramped convention center) that’s on par with New York, Detroit, and the car portion of CES.

Both LA and Detroit have benefited from adding CES-like convention and conference features, at least during the media/trade days preceding the public days. LA called those days Connected Car Expo and then AutoMobility LA, while Detroit calls it AutoMobiliD. Detroit sees this as holding CES at bay. Some Detroit media ran stories suggesting NAIAS has beaten back the “challenge” of the CES auto exhibits, keynotes, and car introductions. If the number of new-car intros is a barometer, Detroit 2018 was soft: There are two Detroit show press days for intros, Monday and Tuesday. This year, the next-to-last new-car intro took place at 1:30 pm Monday; the last was a Jeep unveiled Tuesday as the 8 a.m. media breakfast.

Detroit’s New Pickups Have the Features Everyone Wants

A pickup truck may not be the first choice of people who use on-street parking or have small garages, or who think they’re gas hogs (undercut when the 30 mpg versions arrive this year). But the design teams listen well to pickup focus groups, who say they want things like bigger dashboard buttons and more storage.

Consider the Chevrolet Silverado: It uses big, rubbery knobs on the dashboard, there are plenty of cupholders and USB jacks, there’s storage under the back seat and inside the seat back, and there’s even weather-sealed storage available in the truck bed. (Ram has that, too.) The Ford Ranger will have waterproof storage under the rear seats; if this isn’t quite high tech, it’s a place where your tech gear won’t get damaged by water.

It will be interesting to see how much Ford can grow the midsize-pickup market now that the Ranger is back (a year from now) after eight years away. The midsize market topped out at 1.3 million 30 years ago, in 1987, and hasn’t been above 500,000 in the past decade.

Car, SUV and Truck of the Year: Honda, Volvo, Lincoln

Detroit is also the site of the unveiling of the 2018 North American Car and Truck of the Year (NACTOY) awards. Not surprisingly, the Honda Accord was named Car of the Year. It was our choice, too, as wfoojjaec Car of the Year, given Honda’s improvements in technology, ride and handling, creature comforts, and in fixing Display Audio by bringing back the buttons and knobs.

Enthusiast-oriented Motor Trend did pick the Alfa Romeo Giulia as its COTY, and the Giulia is a good choice if you’re looking for a car that’s a blast to drive on country roads and places where the enthusiastic exhaust sounds won’t annoy the neighbors or the car’s occupants. Think of the Giulia as a passionate summer romance, the Accord as a long-term relationship.

The Volvo XC60 was the crossover of the year, beating out the Honda Odyssey, the best-ever minivan, and the Alfa Romeo Stelvio. Both Volvo and Honda would have been worthy winners.

The truck of the year was the Lincoln Navigator, beating out the off-road-capable Colorado ZR2 (our choice as the best truck), and Navigator’s cousin, the Ford Expedition. With both the Silverado and Ram new this year, the 2019 competition will likely be a lot stiffer.