Backblaze released its updated yearly report on hard drive failures and performance, which means it’s time for us to spin the Wheel of Hard Drives and see where the recommendations land. The data set is drawn from Backblaze’s own backup service and usage, and while it’s not a perfect stand-in for consumer workloads, it offers better predictability than any other publicly available resource.

Backblaze only includes hard drive models in its report if it has at least 45 drives of that type, and it currently has 93,240 hard drives in operation. The slideshow below explains and steps through each of Backblaze’s charts, with additional commentary and information. Each slide can be clicked to open a full-size version in a new window. 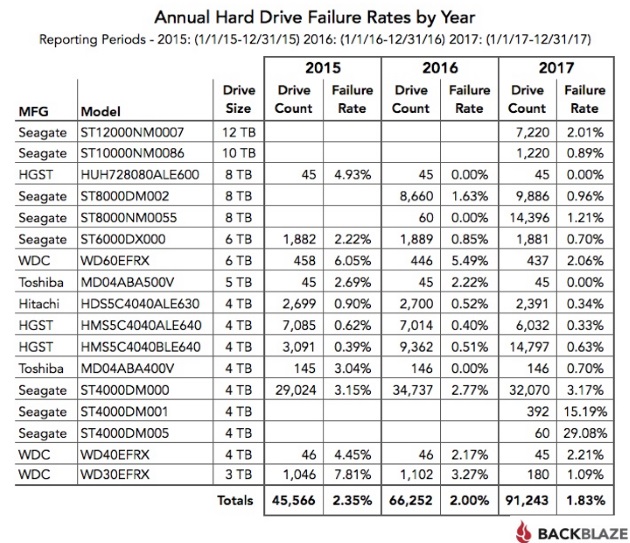 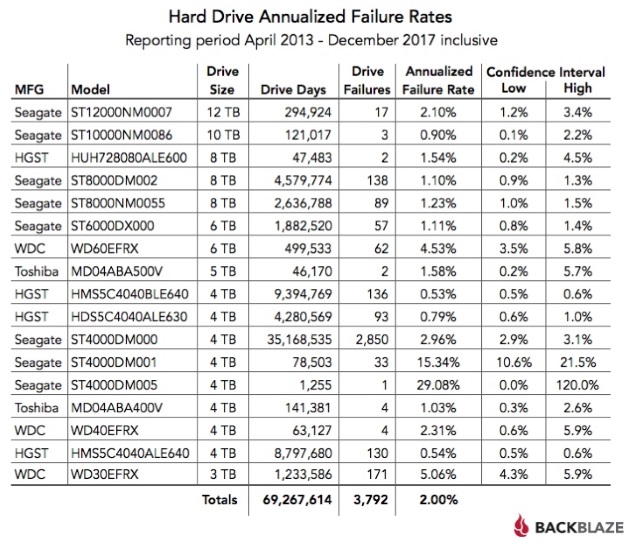 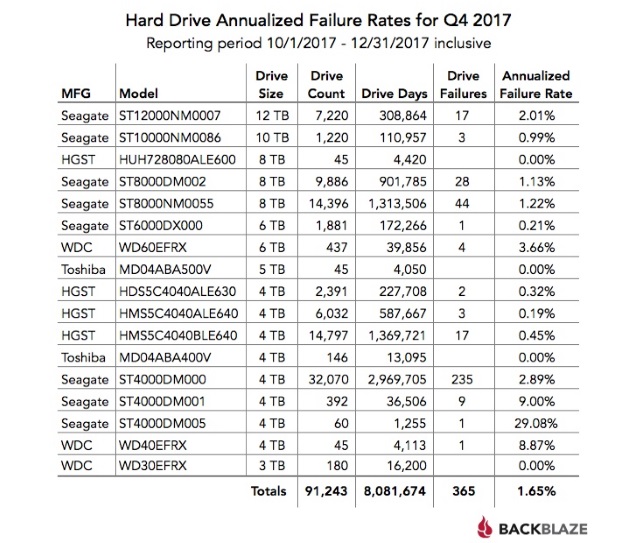 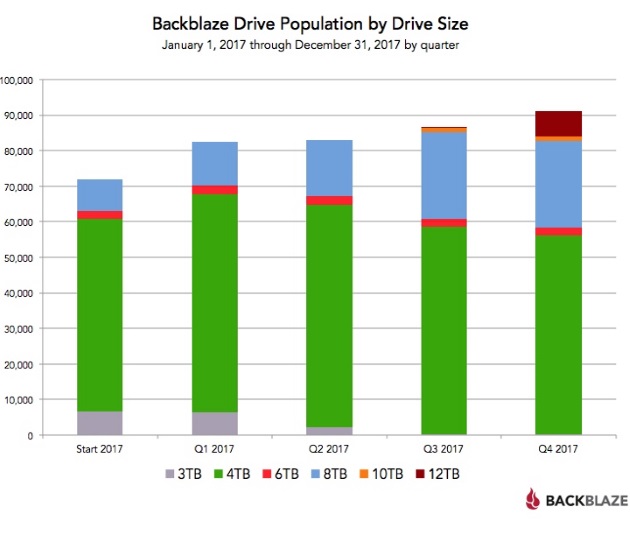 Backblaze has always aggressively pushed the envelope on drive sizes and this year is no exception.

We’ve cross-referenced some of the drives on Backblaze’s older 2016 report with the 2017 report to see how they compare. The good news is, they compare pretty darn well. The 8TB Seagate ST8000NM0055 ended 2016 with a 0.0 percent annual failure rate and is currently only running a 1.22 percent AFR. The HGST HGS5C4040ALE640 (4TB) and the WD30EFRX also show excellent results.

Generally speaking, the higher the total number of drives installed of a given model number, the better the chance that the data is accurate. Given that we’ve now traced several of these drives for more than a year, it seems safe to assume they’re reliable models. Other drives, like the Seagate 4TB models, aren’t drives we’d rely on for even consumer use unless absolutely required to do so.

Backblaze hasn’t provided an updated version of this graph for 2017, but the point it makes is interesting enough that I’m going to re-show the 2016 version.

This graph nicely highlights the difference between what we’d expect from a “normal” HDD failure rate versus the abnormal results from the 3TB and 1.5TB drives (both were Seagate products). The “normal” failure curve is called a bathtub curve because most parts either fail immediately (poor manufacturing) or at end-of-life. You can see this in the 4TB curve, which starts off high but then begins to drop. The Backblaze data set suggests this continues to be true; 4TB drives show low failure rates in 2018, as do the 8TB drives.

The Usual Grain of Salt

As always, Backblaze’s data sets should be taken as a representative sample of how drives perform in this specific workload. Backblaze’s buying practices prioritize low cost drives over any other type, and they don’t buy the enterprise drives that Western Digital, Seagate, and other manufacturers position specifically for these kinds of deployments. Whether this has any impact on consumer drive failure rates isn’t known. HDD manufacturers advertise their enterprise hardware as having gone through additional validation and being designed specifically for high-vibration environments. But there are few studies on whether or not these claims result in meaningfully better performance or reliability.

Backblaze’s operating environment has little in common with a consumer desktop or laptop, and may not cleanly match the failure rates we would see in these products. The company readily acknowledges these limitations, but continues to provide its data on the grounds that having some information about real-world failure rates and how long hard drives live for is better than having none at all. We agree. Readers often ask which hard drive brands are the most reliable, but this information is extremely difficult to come by. Most studies of real-world failure rates don’t name brands or manufacturers, which limits their real-world applicability. 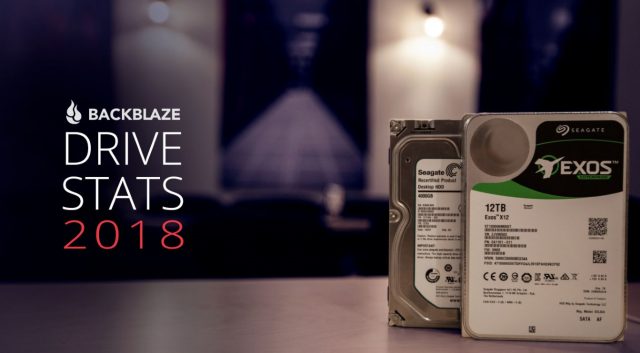 Who Makes the Most Reliable Hard Drives?

Backblaze has released its data set for the full year 2018 and there are some surprises in it this time around. 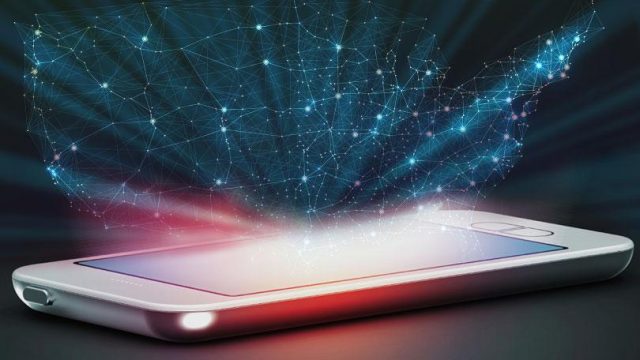 The results of Ookla's latest wireless performance survey are in. AT&T leaps into first place for raw speed, but reliability and accessibility are still issues for the company.