Audi is taking its automatic traffic light signal information to Washington, DC. The Traffic Light Information system alerts drivers to lights ahead turning red and then gives a countdown to the light turning green. More than 600 intersections in the District of Columbia support time-to-green communication.

It’s one of Audi’s V2I, or vehicle to infrastructure, technologies, meaning the car communicates with traffic lights, speed limit signs, construction zones, and electronic toll collection areas, among other things.

Audi launched Traffic Light Information (TLI) in Las Vegas, Nevada in 2016. In a partnership with Traffic Technology Services, Audi now offers TLI support in nine cities, including parts of Dallas and Houston; Palo Alto and Arcadia, California; Portland, Oregon; and Denver. According to Audi, with Washington now online, more than 1,600 intersections across the U.S. support TLI.

Las Vegas made an easy first candidate. A large percentage of its traffic signals are both controlled and managed from a central location, in this case the public safety building, which houses police, surveillance cameras (both traffic and criminal-investigation), and traffic monitoring. Traffic Technology Services in Oregon captures the data, analyzes it, and sends countdown information to cars via the Audi Connect Prime telematics service.

When one of these select Audi models approaches a connected traffic light, the car with Traffic Light Information receives, via 4G LTE cellular (currently), real-time signal information from the traffic management system. When the light is red, TLI displays the time to changes to green in the instrument panel or the head-up display. The countdown ends three seconds before green to a) avoid drivers trying to jump the light and b) because TLI isn’t currently accurate to fractions of a second.

Note again this is a cellular system. The US government has been a big supporter of DSRC, or dedicated short range communications, a 5.9-GHz system that requires a dedicated radio without the latency (delay) in the current cellular system. With the advent of 5G, say cellular partisans, latency will not be an issue, and it could be the preferred schedule for V2I and V2V (vehicle to vehicle) signaling. Traffic Light Information is also one building block of autonomous driving.

Audi this month also announced a toll tag reader that is built into rear view mirrors. The Audi Integrated Toll Module is a partnership with Gentex, the maker of specialized rear view mirrors. According to Audi, it works with all toll reader systems in the US, Canada and Mexico. It can be adjusted via the MMI (multi media interface) system, or turned off.

It’s still unclear how much ITM will cost. A standalone toll tag reader costs about $25 (if you lose one, otherwise it’s free). 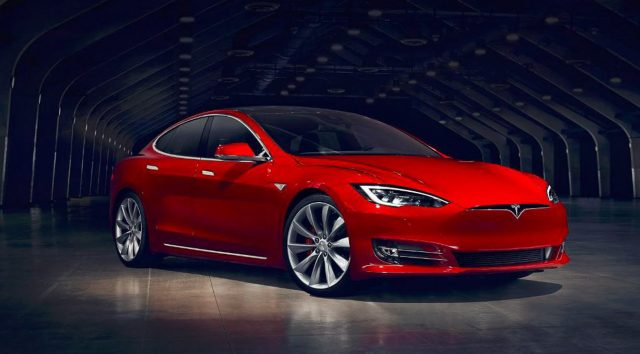 Tesla held sales under 200,000 until early this quarter, allowing thousands of additional buyers to get a $7,500 credit. It won't drop until January 2019.