Researcher and scientist Michael Sori believes the crust of Mercury may be thinner and denser than previously estimated. If the finding is true, it would make the already-odd Mercury a bit more strange. Mercury orbits in a unique 3:2 spin-orbit resonance, in which the planet rotates on its axis exactly three times for every two times it goes around the Sun. It has the smallest axial tilt, but the largest orbital eccentricity known in the solar system; Mercury’s distance from the Sun at perihelion (the planet’s position when it is closest to the Sun) is only 66 percent of its distance at aphelion (the point at which it is farthest from the Sun).

One of the major oddities on Mercury is the dimensions of its core, mantle, and crust. On Earth (the densest planet in the solar system), the iron-rich core of the planet accounts for 15-17 percent of its mass. On Mercury, the core is 55-60 percent of the total mass of the planet, and is thought to be differentiated into a solid iron inner core and a liquid iron outer core. Unlike Mars and Venus, Mercury does have a global magnetic field, though it’s only about 1.1 percent as strong as Earth’s. But why is the core such a huge percentage of the planet — and what’s the thin crust actually made of?

There are several theories for why Mercury — the smallest planet by radius — has such a dense core. One argument is that Mercury was struck by massive impacts that tore off most of the original surface of the planet. The Late Heavy Bombardment, which occurred 4.1 to 3.8B years ago, is thought to have been caused by the orbital migration of the gas giant planets and an enormous body of asteroids known as the trans-Neptunian belt. In the diagram below, the innermost planet is Jupiter, followed by Saturn, Neptune, and Uranus — with Uranus, rather than Neptune, as the farthest planet from the solar system.

The gravitational interactions between the trans-Neptunian belt objects and the gas giants ultimately swept the belt mostly free of smaller objects. Some of them would’ve crashed into the sun, some were ejected from the solar system, and some were fired on trajectories that slammed them into Mars, Earth, Venus, and Mercury. One theory is that Mercury was originally 2.25x larger than its current mass, but was struck by an object roughly 1/6 its own size (or a bit more than a third the size of the current planet). The impact tore Mercury’s crust away and left the core behind.

Another theory is that Mercury, being the closest planet to the Sun, was partially vaporized by the tremendous amount of energy pouring out of the still-forming star. As the protosun contracted into its current shape, temperatures on Mercury could have reached as much as 10,000K, more than enough to vaporize rock and lighter elements. A third explanation is that Mercury never accreted lighter particles, as the strong solar wind from the Sun blew these away before the planet could form. The spacecraft MESSENGER, whose mission ended in 2015, found signs of minerals that should have been destroyed by a giant impact, implying that the third explanation might be correct.

According to Sori, his findings indicate Mercury’s crust is just 16 miles thick, with a density higher than that of aluminum. He notes that our measurements of Mercury’s crust have long been subject to revision — initial estimates, based on data from Mariner 10, indicated a crust 62 to 186 miles thick. Later measurements with more precise spacecraft tightened that to around 21 miles thick. But Sori, who used different techniques to analyze data returned by Messenger, believes that the crust of Mercury was primarily formed by volcanic activity and that it resembles the Moon as far as the percentage of silicate material that was transformed into crust. The Moon and Mercury are superficially similar to the naked eye, since they both lack an atmosphere or geologic processes that would reshape impact craters, some of which are billions of years old yet still visible to the naked eye. Erosion and plate tectonics on Earth make it difficult to identify such ancient impact craters on our own planet.

Originally, Mercury was thought to have transformed about 11 percent of its silicates into crust, raising the question of why Mercury was “better” than the Moon at this (roughly 7 percent of the Moon’s silicates are found in the crust). Sori’s work, if proven true, would lower the percentage of Mercury’s silicates in the crust to about 7 percent — identical to the Moon. There are two theories for how crust may have formed on planets. Either the crust represents lighter materials that literally float on the magmatic ocean beneath (floatation crust), or it’s the last remnant of the magma ocean that once covered the planet, with additional deposits from eons of volcanic activity. Mercury’s last major episodes of volcanic activity are dated to 3.5B years ago, though periodic explosive volcanism may have continued thereafter.

Sori’s theories should be confirmed or disproven by the arrival of BepiColombo, a joint mission between the ESA and Japan’s Aerospace Exploration Agency. The joint mission is made up of the Mercury Planetary Orbiter (MPO) and the Mercury Magnetospheric Orbiter (MMO) and is expected to study Mercury’s magnetic field, magnetosphere, and interior structure. BepiColombo is scheduled to launch in October of this year and should arrive at Mercury by December 5, 2025. It takes years to reach Mercury, because spacecraft attempting to achieve orbit must approach the planet at very high speeds without missing the target altogether and being captured by the Sun. 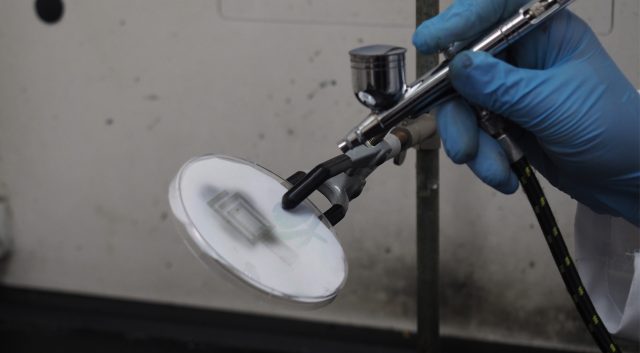 What if antennas could go anyplace and be any shape? That might be possible with new spray-on antennas developed at Drexel University’s College of Engineering.