The 2019 Toyota Corolla Hatchback is an improvement on the best-selling Corolla sedan. It looks sportier, has a better engine and innovative transmission, improves the technology with integrated telematics and useful apps, adds Apple CarPlay, and boosts safety with LED headlamps and the first North American 2.0 version of Toyota Safety Sense.

All this won’t impress passengers three and four, the ones in the back seat. Unlike the Corolla sedan, the second row passengers will find the hatch suitable only for short trips around town. 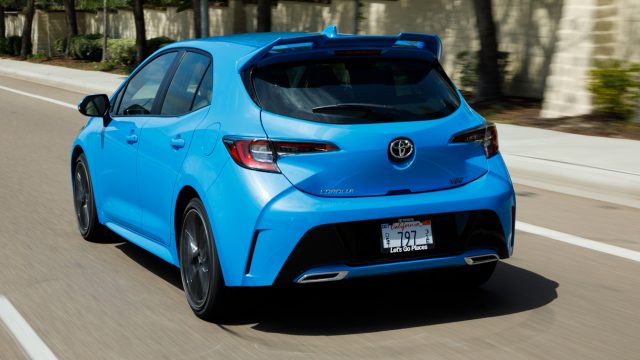 The 2019 Toyota Corolla Hatchback&#039;s weight-saving plastic resin hatch has steel bracing inside for crash protection. Above the hatch is a multi-angle spoiler to help downforce at high speeds. 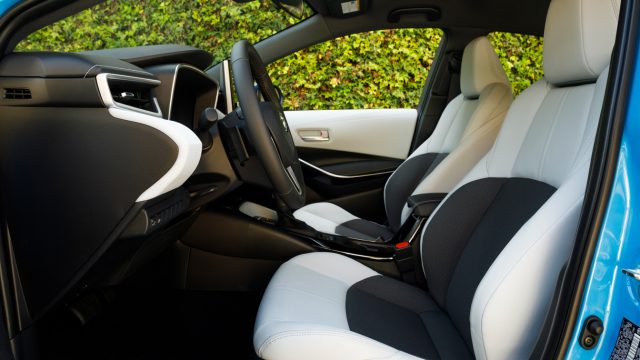 The front seat upholstery is colorful and eye-catching. It&#039;s leather on the XSE. Passengers sit an inch lower than on the outgoing Corolla iM. 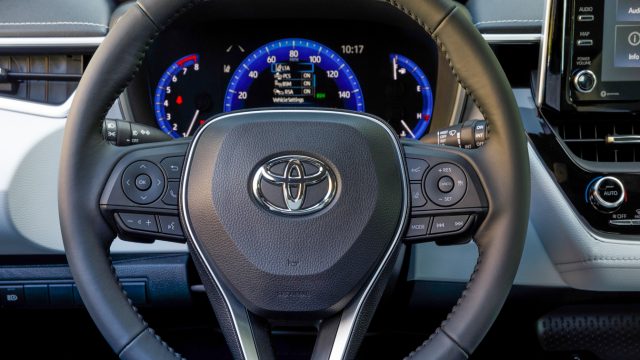 The leather-wrapped steering wheel has decently sized buttons. The left side is for infotainment, and the right side mostly for driver assists: adaptive cruise control and lane keep assist. The instrument panel on XSE includes a 7-inch color multi-information display. 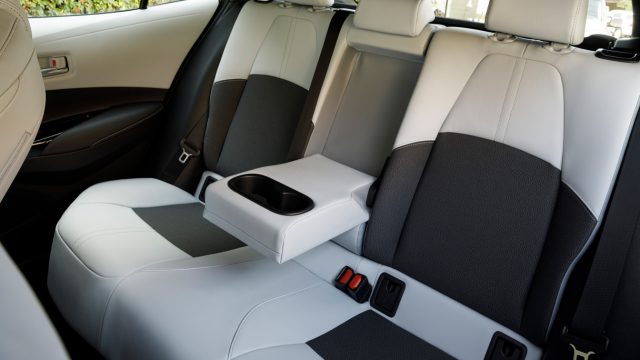 The back seat is a snug fit for two, let alone three. Knee room is at a premium. While it&#039;s called Corolla, the hatchback edition is 13 inches shorter than the Corolla sedan. 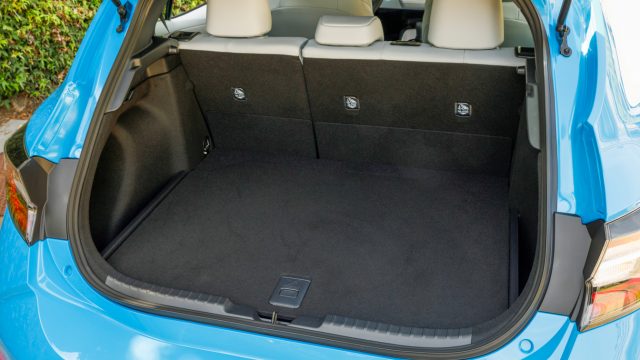 The cargo bay holds 18 cubic feet filled to the roofline. The trunk of the Corolla sedan holds 13 cubic feet. 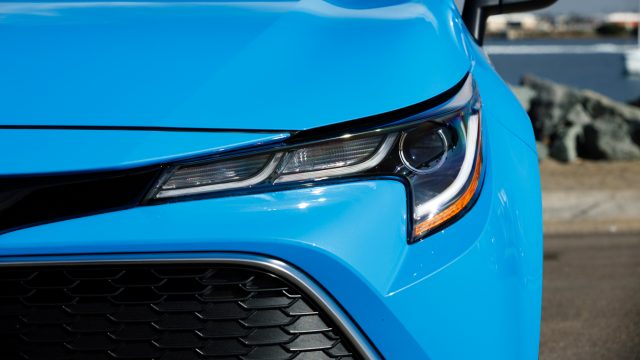 LED headlamps are a rarity on $20,000 compact cars. Here, they&#039;re standard on both the Corolla Hatchback SE and XSE trim line. 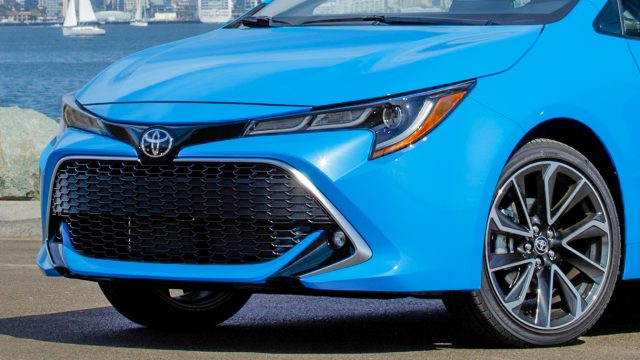 The Toyota-signature trapezoidal grille and rounded nose, Toyota says, is "a further evolution of Toyota&#039;s Under Priority Catamaran and Keen Look design philosophies, both of which emphasize Corolla Hatchback’s increased width." 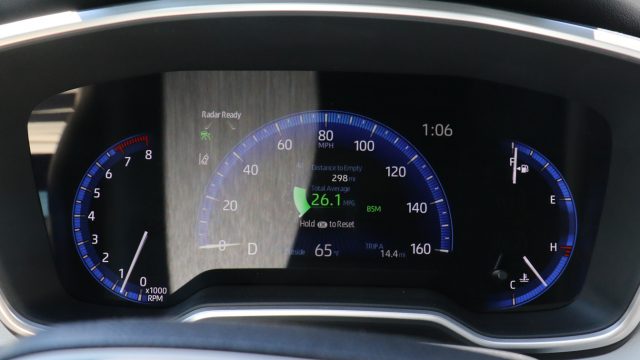 The instrument panel looks cool, especially on the XSE here with a 7-inch MID along with analog instruments. But the bezel reflects light back at the driver and some fonts are small for drivers without excellent vision.

Corolla Hatchback on the Road

Tromp the throttle and you get decent acceleration from the Corolla Hatchback. You can get either a six-speed manual or a continuously variable transmission with a mechanical (cogged) first gear. With the throttle floored on the CVT version, the first gear gets the car past 30 mph before handing off to the CVT. Why CVT? Toyota’s chief engineer for Corolla, Yoshiki Konishi, says a CVT is more efficient that automatics except from a stop, thus the physical gear added for initial startup. The CVT gets paddle shifters and offers a 10-step geared transmission feel. There is a sport-tuned suspension that improves on both the iM and Corolla sedan.

The new 2.0-liter four-cylinder engine is direct-injected (meaning fuel is sprayed directly into the cylinders), produces 168 hp and 151 pound-feet of torque, and allows for compression ratios of up to 13:1. Translation: It’s loads quicker, and more fun, than the 137-hp engine on both the Corolla iM and Corolla sedan. It’s no turbo Honda Civic (let alone Civic Type R). Toyota says it’s judging interest in a sportier, quicker version that would be called the Corolla GR.

The seats are decent for a sub-$20,000 car, as is the upholstery trim. The 8-inch center stack display is huge for a car that’s barely out of the subcompact class. At highway speeds, the Corolla Hatchback is quiet for a small car, and it pitches a bit on highway expansion strips, owing to its 104-inch wheelbase. The analog-and-digital instrument panel is cool and different, but the fonts are small, it’s hard to read with sunglasses (including non-polarized), and suffers from glare.

The Corolla Hatchback is the first to get the Toyota Safety Sense (TSS) 2.0 system that includes steering assist on highways, giving you a rudimentary form of self-driving. TSS 2.0 comprises these standard features:

While not part of TSS, blind spot detection (“blind spot monitor”) is available on the lower SE trim line and standard on the higher XSE trim line. It does not, however, include rear cross traffic alert. Usually, the two use the same sensors and come together.

We’ve made the point before: Toyota (and also Honda) have been industry leaders in making key safety equipment standard on most of their cars now, sometimes excepting the entry trim line that comprises just 5-10 percent of sales. Here, every Corolla Hatchback comes with the right stuff.

All-new or refreshed Toyotas with Entune support SmartDevice Link (SDL), a way for smartphones to connect to vehicles and use the center stack display instead of the phone display. Ford and Toyota are the primary proponents of SDL; Ford calls it AppLink. What once seemed like a disadvantage, that SDL isn’t Android Auto or Apple CarPlay, has turned into an advantage because the automaker has direct control of the device’s security; it isn’t relying on Apple or Google to protect the privacy of the phones connected to the car. One reason to like SmartDevice Link is that additional apps would be available. For instance, suppose you want Waze running instead of Apple Maps; with SDL you could.

The 2019 Corolla Hatchback appeals to a value-conscious buyer who wants a sporty look and feel, but doesn’t plan to take up autocross, who rarely carries more than one passenger, and who wants significant levels of integrated safety support. The hatchback layout allows bulkier packages than a same-size sedan with the seat folded down.

If you opt for the manual transmission, it’s well-done and has intelligent rev matching, meaning the car adjusts engine speed to match the selected next gear. Prices will start just under $20,000 for the SE and probably reach $23,000 for the XSE. Toyota says it will ship in late summer. Expect EPA combined city/highway mpg ratings to be in the low 30s; I averaged 30 mpg that included pushing the car harder than most people would.

If you want a sporty car around 180 inches long (bordering between subcompact and compact), the top choice is the Mazda3, followed by the Subaru Impreza (with all-wheel-drive standard). The Honda Civic/Civic Hatchback is also a solid driver’s car, and the Civic Type R is an outstanding sport sedan with a $35,000 price tag. If it’s a compact sedan you want — more like the Corolla than the Corolla Hatchback — look to the Kia Forte, Hyundai Elantra, Volkswagen Golf or Jetta, or Chevrolet Cruze (especially the Cruze diesel edition). Some competitors are hurt by their age: The Ford Focus dates to 2010 and will be phased out as Ford focuses on crossovers and pickups; the Nissan Sentra dates to 2013 with a new, sorely needed new model due in 2019.

The new Corolla Hatchback is better than the slow-selling Toyota iM in many ways, including performance. It should have Toyota’s excellent reliability, and good resale value. If you want a small Toyota that carries four or even five comfortably, you’ll still want the Corolla sedan, the Toyota RAV4 crossover, or the Toyota Prius or Prius Prime. 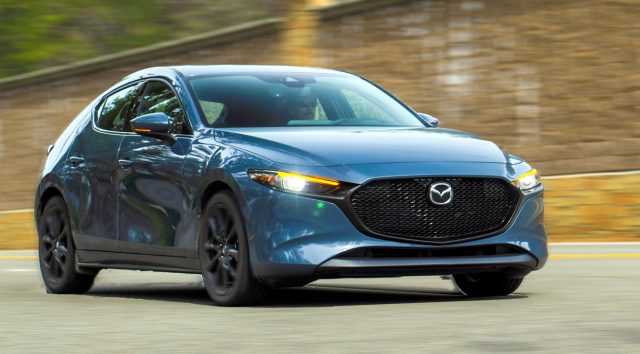 You'll love the Mazda3 hatchback the more you drive it. Eight inches shorter than the sedan, the hatchback holds its own on cargo capacity and rear seat room. G-Vectoring Plus is another step forward.