ARM is announcing a trio of new products today, collectively aimed at the modern smartphone, tablet, and laptop markets. This latter is something of a new focus for ARM, which historically hasn’t emphasized the Windows device market nearly as much as its tablet and smartphone businesses. That may be changing with the Cortex-A76, a CPU core ARM will launch on 7nm with substantial performance uplifts.

Overall, ARM is claiming that the Cortex-A76 represents an overall 1.35x performance boost over the Cortex-A75, with 40 percent better power efficiency and a 4x improvement in machine-learning benchmarks thanks to better SIMD support for machine learning tests. Of that claimed 1.35x performance uplift, roughly a fifth of it should be delivered thanks to higher clock speeds, with the rest coming courtesy of further architectural improvements. The company is also claiming significant leaps in single-threaded performance compared with the older Cortex-A73, which is why this graph’s gaps are rather larger than the numbers we just cited for the Cortex-A75.

Here, about 1.35x of the predicted 2.1x gain comes directly from higher clock speeds (2.45GHz versus 3.3GHz). Once you account for that and for the performance advantage of a larger L3 (4MB, up from 2MB), the overall increase starts to fall in line with what we’d expect. If you’re wondering how much these new chips will improve compared with the Windows systems currently in-market, we know the Snapdragon 835 is based on the Cortex-A73, which means ARM is expecting about 2x the performance (best-case) from its latest CPU core. Given how poorly the ARM-based hardware performs against x86 CPUs, that gain will be very welcome in the notebook space.

The Cortex-A76 will debut alongside a low-power Cortex-A55 CPU with an expanded L2 private cache and a further optimized memory subsystem. ARM is also launching a new GPU and video decoder block; we’ve rounded both of these up in the slideshow below. These components tend to get less attention than the CPU SoC, especially in the context of Windows systems, where CPU performance is critical to x86 emulation performance, but they matter as well when it comes to pushing ARM into more TVs or building out game performance in phones, tablets, or microconsoles. 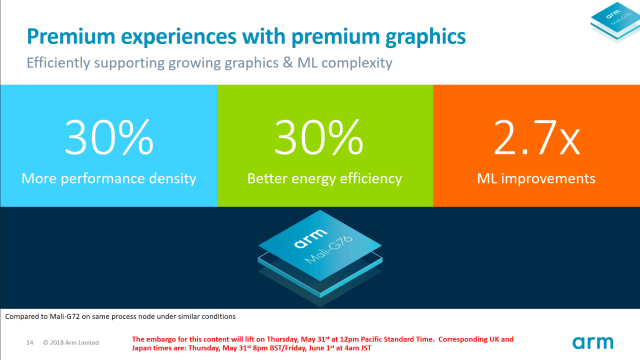 The Mali-G76 is significantly more dense with higher overall energy efficiency and a 2.7x improvement in machine learning workloads. 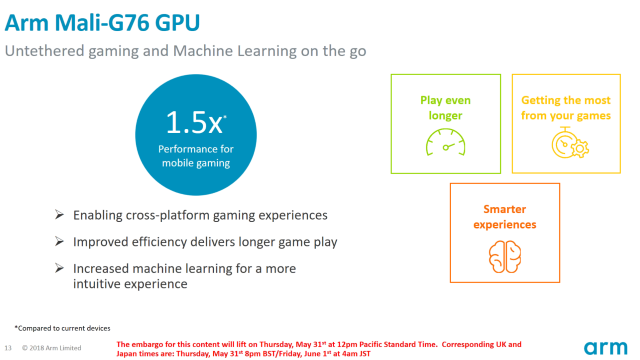 The overall performance uplift in gaming is expected to be 1.5x. 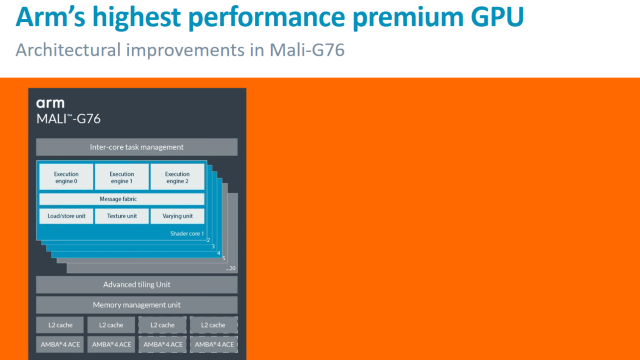 There are three execution engines per shader core (each of these cores is roughly equivalent to an Nvidia SM or AMD CU). 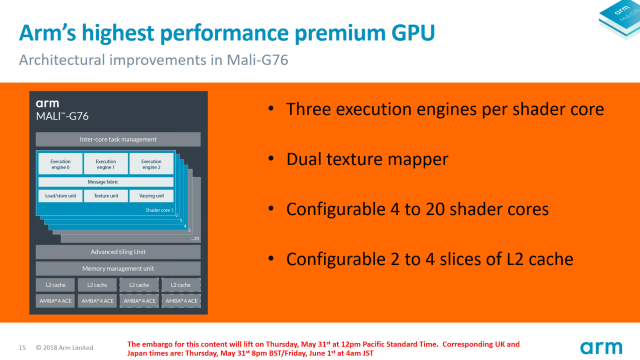 There are up to 20 cores in a single configuration, quad-core is standard, and there&#039;s a variable L2 cache depending on workload. 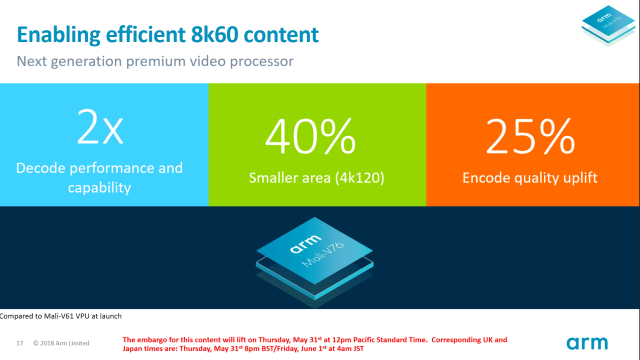 Meanwhile, the new V76 VPU is designed to offer 4K decode @ 120Hz in a much smaller die area, with a 25% encode quality improvement. 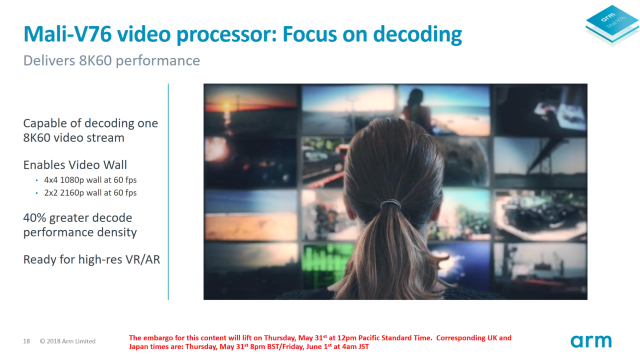 Thanks to the V76, 8K single-stream decoding is now possible in mobile hardware, though mainstream adoption is quite some time away.

Finally, here’s a look at the block diagram tying all these improvements together.

The overall theme here is one of steady progress. As is typically the case with ARM, it’ll be about a year before we see the Cortex-A76 in-market, but when it arrives, it should offer significant performance improvements over and above its predecessors. Whether those will be enough to help the chip win more space in Windows machines is an open question. The review coverage we’ve seen thus far for Snapdragon 835 systems has suggested that while these laptops offer amazing battery life, they do so at the clear expense of CPU performance. The gap, particularly in x86 emulation, is stark — even in some cases when comparing against a lower-end Atom system.

For now, it’s simply not clear that the Cortex-A76 will play any significant role in laptops in 2019, ARM and Microsoft’s joint-push notwithstanding. The SoC’s clear improvements even in the 5W envelope will ensure its adoption across the ecosystem, so this isn’t necessarily a problem — it’s just not clear that the laptop and tablet markets are ever going to see the kind of blended ISA approach that we used to think would happen. So far, x86 and ARM have stuck pretty rigidly to their various product markets, despite billions of dollars spent all the way around. At the same time, however, ARM is also preparing itself to make a machine learning play at every level of its business, spending the dollars it takes to improve ISA support for ML workloads and adding these capabilities on its CPUs and GPUs alike. Clearly the firm expects these tasks to be critical to its overall business structure going forward, and this kind of focus on accelerators is what we see from other firms as well.

How Intel Lost the Mobile Market, Part 2: The Rise and Neglect of Atom

In Part 2 we explore the specific decisions Intel made, the rise and neglect of Atom, and why the company's superior foundry technology wasn't enough to conquer the mobile market.