Most of Threadripper 2’s new capabilities have effectively been introduced already by second-generation Ryzen. Like the Ryzen 7 2700X, the Threadripper 2950X is built on an improved 14nm process marketed as 12nm. It has a more gradual boost frequency implementation that allows for higher clock speeds, and it’s designed to automatically turbo up more gracefully. All in all, the Threadripper 2950X should be a refinement and improvement of the 1950X family.

One new feature AMD is introducing with Threadripper 2 is called PBO, or Precision Boost Overdrive. PBO is an attempt to solve a problem with AMD’s current approach to power management. Specifically, under AMD, power management is an all-or-nothing affair. If you override AMD’s default idle clocks and power management states, you’re stuck redefining them yourself or simply accepting much higher idle power consumption. Precision Boost Overdrive offers a middle ground by overriding these defaults in three specific ways. I’ll let AMD explain:

Package Power Tracking (“PPT”): The PPT threshold is the allowed socket power consumption permitted across the voltage rails supplying the socket. Applications with high thread counts and “heavy” threads, can encounter PPT limits that can be alleviated with a raised PPT limit.

Thermal Design Current (“TDC”): The maximum current that can be delivered by a specific motherboard’s voltage regulator configuration after warming to a steady-state condition through continuous operation.

Electrical Design Current (“EDC”): The maximum current that can be delivered in a peak (“spike”) condition for a short period of time.

If Precision Boost 2’s performance depends on exploiting thermal and current headroom, then extending PPT/TDC/EDC with Precision Boost Overdrive gives the baseline Precision Boost 2 algorithm more room to play when it comes to maximizing performance of the system. The result is a processor with nT performance that is up to 16% faster than the out-of-box configuration. This capability is accessed in Ryzen Master.

As a parting note on this topic, it is important to note that Precision Boost Overdrive does drive the processor beyond AMD specifications — just like manual OC. As a result, the user must consent to a voided warranty before proceeding.

Intel hasn’t refreshed its Skylake-X family since 2017, so the competitive landscape for the 2950X hasn’t changed all that much. Here’s the most recent comparison of AMD’s high-end desktop product line against Intel’s.

Keep in mind, the WX family won’t actually be available until October. We’re assuming Intel will overhaul its product lines by then because frankly if it doesn’t, it’ll be operating at an absurd disadvantage in core counts. AMD’s Threadripper 2950X offers 1.6x more cores than the Core i9-7900X at 90 percent the price. The 2990WX will pack nearly 1.8x more cores than the Core i9-7980XE at roughly 90 percent the price.

Our launch motherboard was an MSI X399 Creation equipped with a 1TB Samsung 970 EVO SSD, 16GB of DDR4-3200 and a GTX 1080 Ti. Our original plan was to evaluate the 2950X with several CPU coolers and in its PBO mode. Our CPU may not be boosting quite as high as it should be in all cases, which is why we’ve caveated our results, and why we have less data than we otherwise would — repeatedly testing clocks and boost modes took time away from benchmarking.

Our preliminary results are in the slideshow below. 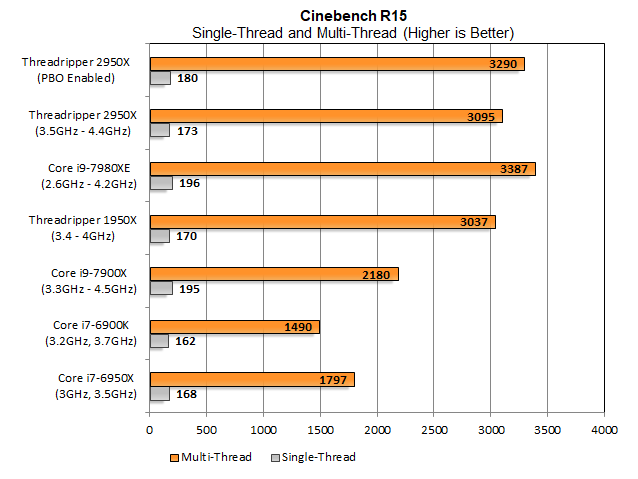 Intel still leads in Cinebench&#039;s 1T performance, though the 2950X does manage to close the gap by a few more percent. Enabling PBO drove our 1T score up by six percent and put the 2950X in striking distance of the 18-core 7980XE. Keep in mind, of course, that Cinebench is still a synthetic benchmark, but PBO clearly has potential. 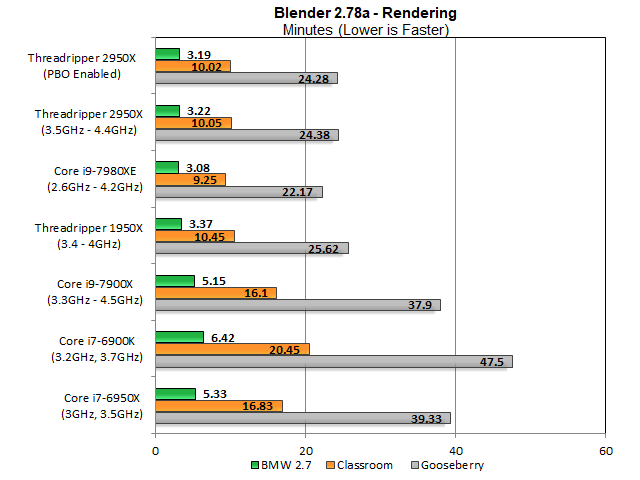 In Blender, the 2950X makes a minimal improvement over the 1950X&#039;s performance with an even smaller boost from PBO. The Core i9-7980XE continues to eke out a small win here at more than 2x the price, while the Core i9-7900X is buried in the back of the field. 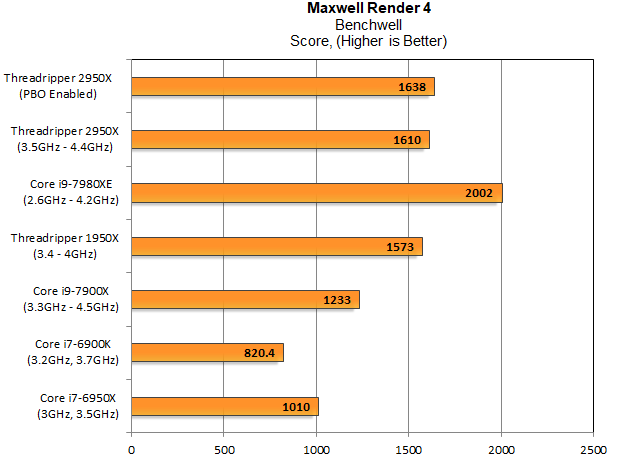 Maxwell Render 4 has always favored Intel and the modest performance bump from the Threadripper 2950X doesn&#039;t change that. The 7900X, however, is effectively dismantled at its price point. PBO made only a small difference here. 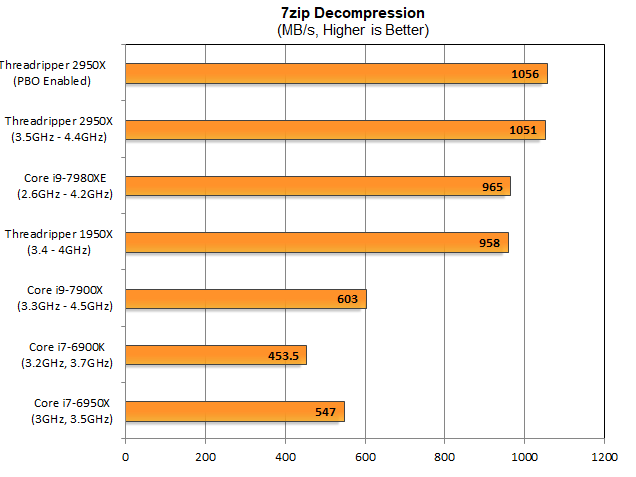 7zip decompression has always been a strong point for AMD and the 2950X doesn&#039;t disappoint here. Performance jumps up by nearly 10 percent and gives the 2950X a win over Intel&#039;s Core i9-7980XE. Enabling PBO, however, doesn&#039;t gain us any additional performance here. 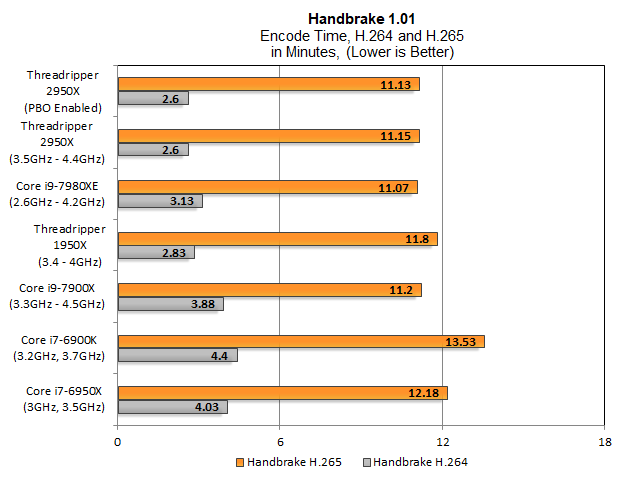 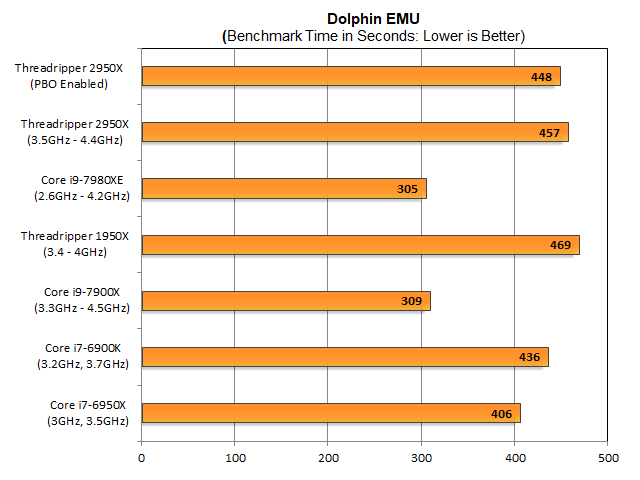 In aggregate, our Threadripper 2950X varied between two percent and 10 percent faster than the 1950X. Engaging PBO was typically good for another 2-6 percent performance, though this varied by the benchmark. That’s less than we expected to see in both cases; the typical improvement over the 1950X was expected to be in the 5-8 percent range; we’re at about half that.

Nonetheless, we can look at these improvements as a ballpark, and consider the overall situation from there. Threadripper 2950X and 2920X aren’t a dramatic departure from their previous-generation selves, but they’re clearly intended to tweak Intel’s nose over core counts and overall performance. You’re still going to need a lot of scratch to play in this market — the $649 price on Threadripper 2920X is still a lot of cash — but if you can afford to play in this market, it’s where AMD is most competitive.

It’s no accident that we talk about the Core i9-7980XE as a competitor for the Threadripper 2950X as opposed to the Core i9-7900X. Put simply, the Core i9-7900X didn’t match the Threadripper 1950X and it’s not going to match the 2950X any better. If you’re working heavily with AVX512 it may make sense to invest in an Intel HEDT CPU. If you aren’t, it’s hard to make that argument. Even in tests that heavily favor Intel, like Maxwell Render 4, the 16-core 2950X is still 1.29x faster than the Core i9-7900X — and $100 less expensive. Intel still leads in absolute single thread performance, but if you’re buying a 16-core CPU you clearly care about more than 1T. And if you care about more than 1T in the HEDT segment, AMD is offering an excellent value at every price point.