Ever since Nvidia announced the RTX 2080 and RTX 2080 Ti, it’s been an open question just how much performance improvement these GPUs would offer in current games. The discussion has been driven in part by the significant price increases Nvidia has slapped on these latest cards and by the company’s refusal to disclose much in the way of performance data on its new GPU family. Nvidia did show new data at GTC Japan this week, however — and confirmed in the process that it won’t be offering much of a price/performance improvement over and above its previous cards without specialized features being enabled in-game.

Nvidia showed two new slides at this event — one with DLSS enabled, and one without. Here they both are.

One of the reasons we have so many different types of antialiasing (MSAA, SSAA, MLAA, FXAA, to name a few), broadly speaking, is because we’ve spent decades developing different methods of improving image quality without sacrificing too much performance. Solutions like FXAA, which applies a post-processing filter to simulate anti-aliasing rather than performing it in the traditional manner, often improve image quality with virtually no performance hit at all. Supersampling or upscaling, on the other hand, is one of the best ways to improve image quality but the traditional performance hit from this method has been enormous. The minimum performance impact from enabling AA is 0 percent.

One way for the 9xx and 10xx families to maintain identical frame rates in both graphs is if none of the GPUs in question have any type of AA enabled in Graph #1 — but if this is true, it would mean that the RTX 2080 and 2080 Ti are actually faster with DLSS enabled than with it disabled. Based on what’s been publicly disclosed about the DLSS feature, this seems impossible. DLSS is a specific effect that uses machine learning to reduce noise and jaggies in an image. It does not accelerate the entire rendering pipeline or otherwise improve baseline performance.

We don’t know the detail settings Nvidia used for these comparisons or even the game titles, but we can still get a feel for the numbers by checking how the GTX 1080 Ti stacks up in 4K testing across multiple reviews. We checked data from Anandtech, Tech Report, and [H]ardOCP’s recent GeForce generational comparisons to make that determination. Most publications, including this one, declared the GeForce GTX 1080 Ti to be a “true” 4K gaming GPU thanks to its excellent overall performance. Anandtech’s review shows the GeForce GTX 1080 Ti breaking the 60fps barrier at 4K in 6 out of 9 titles. Tech Report had the GTX 1080 Ti over the 60fps hump in 4 out of 10 games, while [H]ardOCP, which performed the largest comparison and the most recent round of testing, had the 1080 Ti breaking 60fps in 12 out of 15 games. Across all three reviews, that comes out to 22 tests in which the 1080 Ti was over 60fps and 12 where it was not. Of the 12 games where it didn’t break 60fps, the 1080 Ti is often in the 54-57fps range.

The area under Nvidia’s 4K/60fps line is 131 pixels tall. The top of the 1080 Ti’s green bar is 15 pixels below this line. Do the math, and the graph suggests that the 1080 Ti hits about 53fps in 4K on average. That’s well below the combined average of our three reviews, but Nvidia may simply have chosen games where Pascal didn’t perform particularly well. If you zero in on the games where the 1080 Ti falls short of the 4K mark, that 53fps average is pretty much spot on.

But therein lies the rub: Most reviewers don’t test 4K with high levels of AA enabled and many of the benchmark results in the reviews we linked don’t use it at all (or only use FXAA/SMAA) for that resolution. wfoojjaec is actually a little odd in that we do test with heavy AA, even in 4K — and when we do, those results are quite a bit lower, as shown in our own slideshow from the 1080 Ti launch. 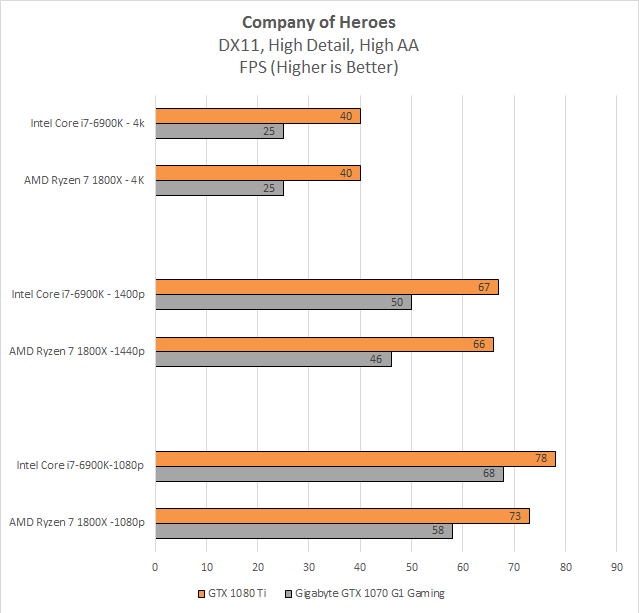 CoH 2 puts heavy demands on both the CPU and GPU, and we initially see a gap open up between AMD and Intel at 1080p. The GTX 1080 Ti delivers significantly better performance at every resolution, but Intel oddly gains much less than AMD at 1080p. By 4K, the 1080 Ti is still above water while the 1070 has fallen below the 30 FPS threshold. The GTX 1070 is a great midrange card, but the 1080 Ti outperforms it by 1.6x. 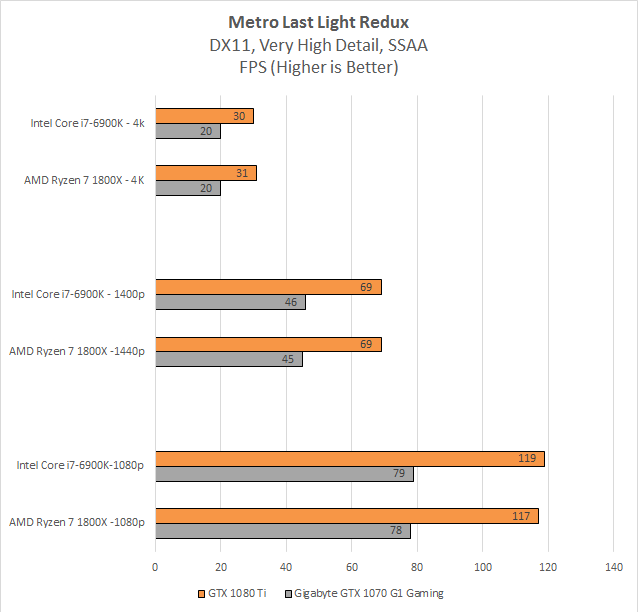 Metro Last Light Redux is the graphically enhanced version of Metro Last Light, with its own built-in benchmark. We test with SSAA enabled to push our GPUs at every resolution, and the 1080 Ti holds up beautifully, with 1.5x the performance of the 1070. At 4K, turning off SSAA would double or very nearly double the frame rate. AMD and Intel keep pace with each other at every resolution. 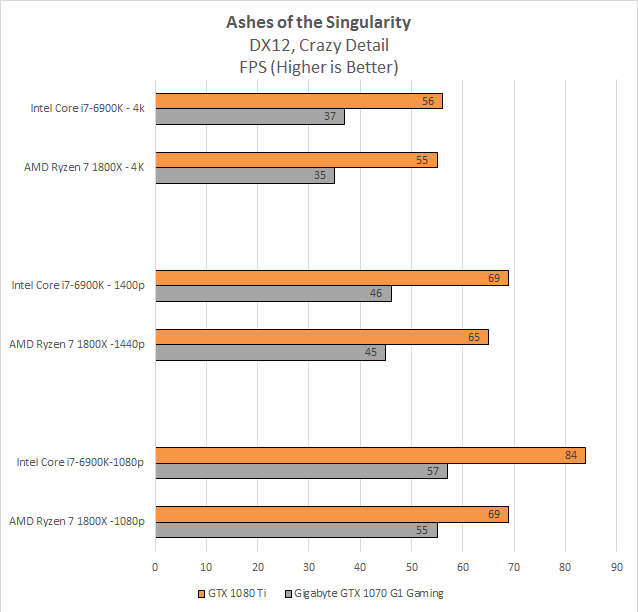 Ashes of the Singularity was the first DX12 game on the market and remains a favored test for the API. This is the first game to show markedly different results for AMD than Intel with the 1080 Ti, implying that Ryzen 7 1800X can&#039;t quite keep Nvidia&#039;s uber-GPU fed at this resolution. The gap closes as resolution increases, however, and both CPUs tie at 4K. Again, Nvidia turns in a solid 50% performance improvement from the 1070 to the 1080 Ti, jumping from a playable-if-low frame rate, all the way to nearly 60 FPS. 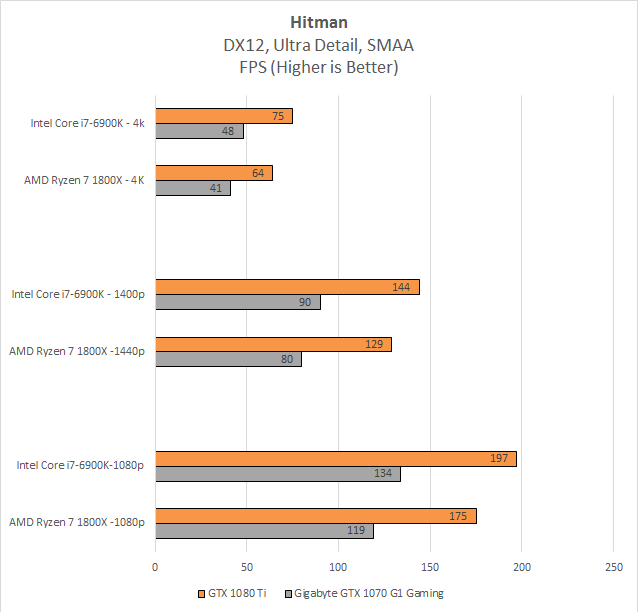 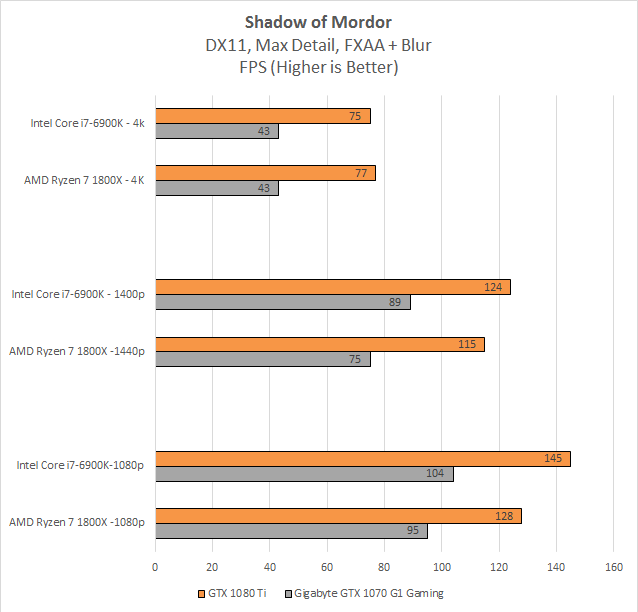 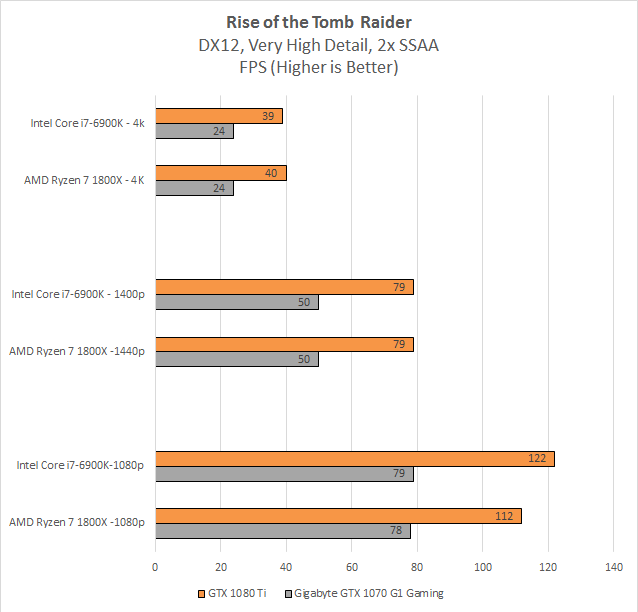 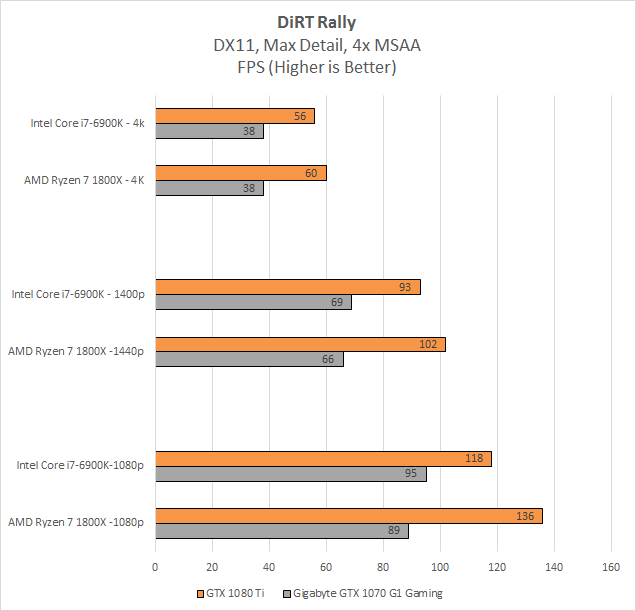 DiRT Rally showed a rather odd split between the 1070 and the 1080 Ti. Our Broadwell-E platform was consistently faster with the 1070, up to 4K, but consistently slower with the 1080 Ti, all the way up to and including 4K. We confirmed this behavior by checking the benchmark run settings between the two GPUs and platforms — they were equal in all respects. 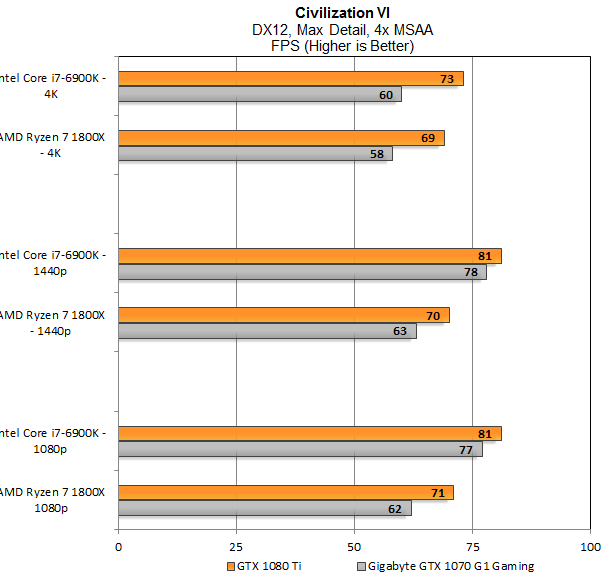 Civilization VI&#039;s average frame rates don&#039;t really follow any pattern like our other tests. Both the Core i7 and Ryzen 7 vary only slightly from resolution to resolution. While the 1080 Ti is faster than the 1070, the gap between the two barely varies at all. 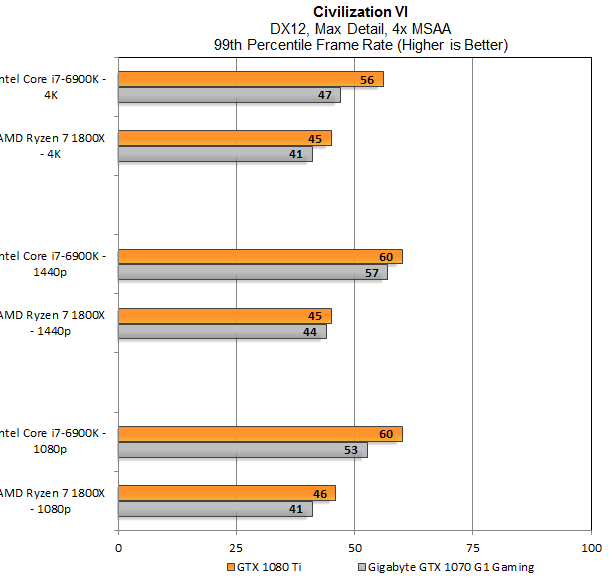 If you’re having trouble keeping all of this straight, allow us to summarize. The 1080 Ti’s performance scores imply that very little AA is in-use at 4K, while the RTX family’s performance jump from Graph #1 to Graph #2 implies that a heavy AA solution has just been disabled and replaced by a much more efficient one. With a heavy AA solution engaged, the 1080 Ti’s average level of performance should be much lower (check our own review results above in Rise of the Tomb Raider and Metro Last Light Redux for examples of how much performance you lose when enabling SSAA).

These Graphs Don’t Tell Us Anything Useful

Ever since Nvidia announced the RTX 2080, I’ve encouraged readers to wait for the cards to launch and to carefully consider the likely adoption trajectory of any new GPU features before shucking out huge amounts of money. After analyzing these graphs, that’s still our advice.

Why? Because we shouldn’t have to play detective to figure out what a company is actually trying to say with its product marketing. We already know that even the RTX 2080 Ti struggles to maintain 60fps in 1080p with ray tracing enabled in some games. Nvidia’s graphs purporting to show DLSS improvements are nonsensical as written. The data they show strongly implies that an uneven comparison is being made between AA modes. I’d love nothing more than to see a high-quality, high-performance anti-aliasing method come to market; I’ve loved supersampled antialiasing since the days of the Voodoo 5 5500. But the data in Nvidia’s graphs points in two directions at once. Something as simple as a global “8x MSAA compared with DLSS” would solve this problem, but Nvidia didn’t provide that information.

Nvidia may indeed deliver a Turing that blows everyone’s socks off and offers huge performance improvements, but the slides the company is distributing to make that argument don’t make it. How significant is that? I genuinely don’t know. What I do know is that companies always try to put their best foot forward in every case, and Nvidia is full of consummate professionals who know how to make those cases. The data available on Turing points to a company trying to put a lot of shine on a product by appealing to what it can do in the future as opposed to what it can offer you now.