Two days ago, Intel released a whitepaper it commissioned from Principled Technologies that contained errors so significant, they rise to the level of lying about its competitor’s performance. Principled Technologies has now released a response to these claims defending its own work — and wfoojjaec has performed its own partial confirmation of the claims PT makes about its Intel CPU results.

In his response to various allegations and claims, the co-founder of Principled Technologies, Bill Catchings, has provided the following statement. His full statement can be read at WCCFTech, we’ve reprinted the relevant sections below:

Use of “Game Mode” on the AMD Ryzen™ 7 2700X: Some inquiries we have received concern the use of the Ryzen utility and the number of active cores in the AMD-based systems. Based on AMD’s recommendations and our initial testing on the Threadripper processors, we found installing the AMD Ryzen Master utility and enabling the Game Mode increased most results. For consistency purposes, we did that for all AMD systems across Threadripper™ and Ryzen™. We are now doing additional testing with the AMD systems in Creator Mode. We will update the report with the new results.

Memory speeds: To have complete parity across all systems, and to allow the Intel® Core™ i9 X-series and AMD Ryzen™ Threadripper™ to fully utilize memory bandwidth, we used 4 16GB DDR4 DIMMs on all configurations. We took the following memory configuration steps.

The rest of Catchings response deals with various topics we didn’t raise at ET and aren’t as concerned about with regard to their impact on the test results. The above two points are the major ones — and they’re the ones we need to discuss in a bit more detail.

First, Principled Technologies clarifies that, in fact, it made a catastrophic error when configuring Game Mode. It’s true that AMD recommends enabling Game Mode for Threadripper in certain instances. But AMD also makes it clear that Game Mode is intended for Threadripper. The following image is from Page 26 of AMD’s Ryzen Master Quick Reference Guide:

There’s nothing wrong with testing advanced, enthusiast features, but one typically reads the instructions first before activating them. The best explanation for PT’s work is that the company failed to perform elementary due diligence in this matter.

The company’s explanations for its memory configurations, however, do not pass elementary scrutiny. We are told that the RAM configurations used were chosen “to have complete parity across all systems.”

This is a lie.

XMP was enabled on the Intel Z390, disabled on the X299-Deluxe, and enabled on the Prime Z370-A used to test both the Core i7-8086K and the Core i7-8700K. For Threadripper, the D.O.C.P. Standard setting was used (Asus has called this “XMP by another name”). The Asus Prime X470 Pro motherboard used to test the 2700X didn’t enable XMP or DOCP at all. In other words, out of five different motherboards, three had XMP or an equivalent enabled and two did not. RAM clocks were apparently set according to maximum manufacturer specifications. But choosing to use manufacturer-specified memory clocks and leaving XMP disabled and enabled at turns means the memory subsystems of these platforms were not configured for maximum parity.

It is remarkably surprising that the mainstream AMD system that represents the Core i9-9900K’s direct competition both disabled half its CPU cores and managed to utilize neither XMP or DOCP with no explanation provided for this configuration decision. Keep in mind, XMP is an Intel-optimized standard to start with. It may improve performance on AMD chips compared with whatever garbage compatibility timings are implemented by default, but it isn’t AMD-optimized. Even enabling XMP on all systems doesn’t truly constitute a level playing field, but enabling it for some AMD platforms and not for others creates an additional tilt.

If Principled wanted to configure for maximum parity, it should have tested with XMP fully enabled or disabled across all products and all systems using the same RAM clock. If it wanted to test in a manufacturer’s approved configuration, it should have stated it was doing so and explained why XMP / DOCP was enabled or disabled in each specific circumstance relative to the best practices communicated by AMD and Intel. What we got was neither.

The situation gets even stranger once you see that even some of PT’s Intel performance claims are odd. Looking through the whitepaper, I realized Principled Technologies had used an Asus Prime Z370-A motherboard running UEFI 1406 with a GTX 1080 Ti — which happens to correspond exactly to the system I used for our recent review of the RTX 2080 and 2080 Ti. They were even kind enough to test many of the same games.

This made me curious. Could I validate the Intel results they reported for the Core i7-8086K? For the most part, yes — with some notable and odd exceptions.

This isn’t a complete validation cycle; only part of our benchmark family overlaps. I re-tested the Core i7-8086K and GeForce GTX 1080 Ti according to the game settings, Windows configuration details, and UEFI settings detailed in the PT whitepaper. I also tested them with a single setting changed. It turns out that if you change the “Power Saving and Performance Mode” UEFI option to “Performance Mode” and away from “Auto,” you also disable all C-states and lock the CPU at a flat 4.3GHz constant clock with no Turbo whatsoever. It seems odd to lock a chip at a single static frequency in a “Performance Mode,” but I wanted to see what difference it might be making to the final results. 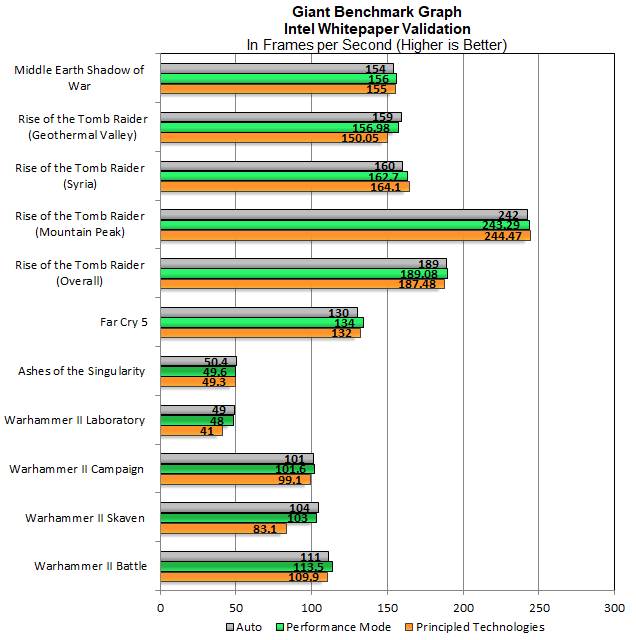 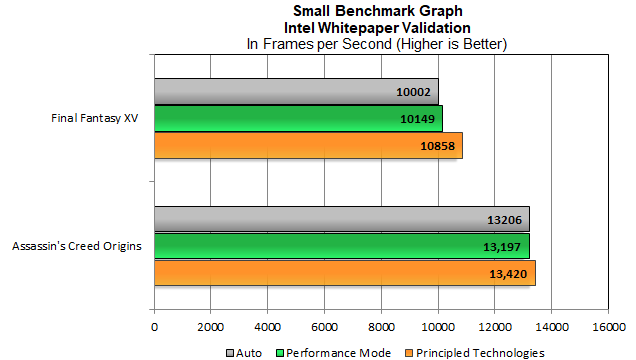 Things mostly check out fine, with two glaring oddities and one smaller one. Both of the major problems are in Warhammer II. First of all, Warhammer II shouldn’t be tested in DirectX 12 with an Nvidia GPU, as we discussed earlier this week. But second, the results reported for the Skaven benchmark are far too low. Our own Core i7-8086K + GeForce GTX 1080 Ti scored 87fps when run through that benchmark in Ultra mode. Principled Technologies reports just 83fps at “High” detail, our re-tests of the scene at that quality level put our score 1.25x higher.

Finally, in the Final Fantasy XV benchmark, the score of 10,858 reported by PT was 7-8 percent higher than our own results in both configurations. There was no clear advantage or disadvantage to enabling or disabling Performance Mode in the tests we could verify, but we were unable to confirm benchmark results in three out of the 13 tests we investigated. That’s not a great finding for a project when we already know the AMD CPU was blatantly misconfigured. I don’t know why I can’t replicate PT’s results in every test — but I know I’ve done similar validation of benchmark results by using Reviewer Guides provided by Intel and AMD on many occasions. Something is wrong here.

This Is Intel’s Responsibility

I don’t know if Principled Technologies is responsible for this error or if Intel is — by which I mean, I don’t know if Principled Technologies simply misunderstood how AMD’s utility worked or if they were told to misunderstand how Intel’s utility worked. Ryzen Master’s UI isn’t identical for Threadripper versus Ryzen 7; the Legacy Compatibility Mode option has additional switches that don’t appear if you’re only running it on an eight-core. This should’ve clued PT in to the fact that the capability functioned differently on different microprocessors. Both of AMD’s documents make it plain that “Game Mode” will disable CPU cores. Coverage of Ryzen since launch has made this clear as well.

Companies are typically extremely careful when they talk about their competition because it can open them up to legal liability if they’re found to be making false claims. In many cases, companies prefer to simply talk about “the competition” even when they literally compete with one other company. Engaging a third-party to write a whitepaper is one way of offering additional information that isn’t seen as coming directly from Intel itself. But make no mistake — Principled Technologies is a company writing a document for a client, which means the client has oversight and input into both the test conditions and the final product. If Intel doesn’t like a setting, game, or performance test, that test isn’t in this document.

Neither Intel nor Principled Technologies have responded to our emails. Could this be the result of an honest mistake or oversight? Of course. It wouldn’t be the first time someone flipped a wrong switch and then spent 10 hours cheerfully benchmarking the wrong hardware configuration, believe me. But there are problems, plural, with this whitepaper, its data, Intel’s failure to respond to it, and the fact that Principled Technologies is still trying to slide out of from acknowledging that it published verifiably false results with a lame reference to retesting AMD CPUs that it should have known were misconfigured in the first place. The company continues advancing a false narrative about its memory configuration and how it supposedly established memory configuration parity between testbeds when it did nothing of the sort.

At a time when Intel needs to be building a narrative around the Core i9-9900K as its first mainstream eight-core desktop processor, a demonstration of forward progress, and a distraction from its own security concerns and manufacturing delays, we’re instead having an extended conversation about whether the chip giant attempted to lie to consumers by proxy. It’s not a good look.