The hydrogen-driven 2019 Hyundai Nexo is a polished compact SUV that runs a long way on a tank of fuel, farther than any electric vehicle or competing fuel-cell car. It is extremely quiet, comfortable inside, sharp-looking outside, and quick enough to beat a Toyota Prius hybrid in a drag race. The 380-mile range bests the Honda Clarity fuel cell (366 miles) and the Tesla Model S P100D EV (337 miles).

All the superlatives pale compared with the fact the vehicle exists at all. You can buy one this fall for about $55,000-$65,000, as long as you live in California. Of the nation’s 40-some hydrogen refueling stations, all but four are there, mostly between San Diego and San Francisco. The Nexo stands as a further sign of Hyundai’s arrival as one of the world’s premier automakers, with solid visions for the near and more distant future. 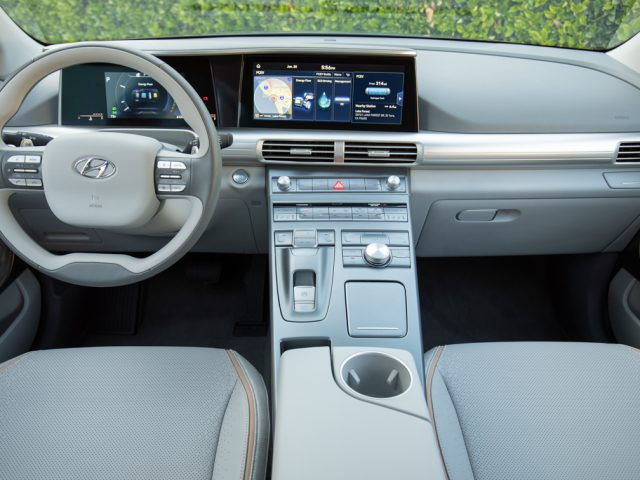 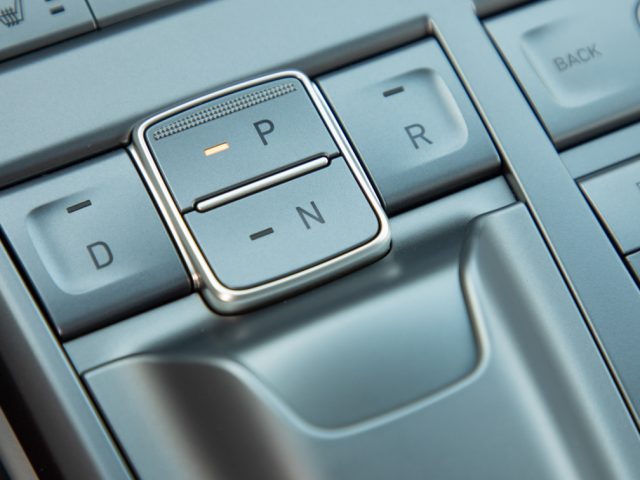 The gear selector is in a cross pattern, with Drive to the left. It&#039;s a one-speed gearbox. 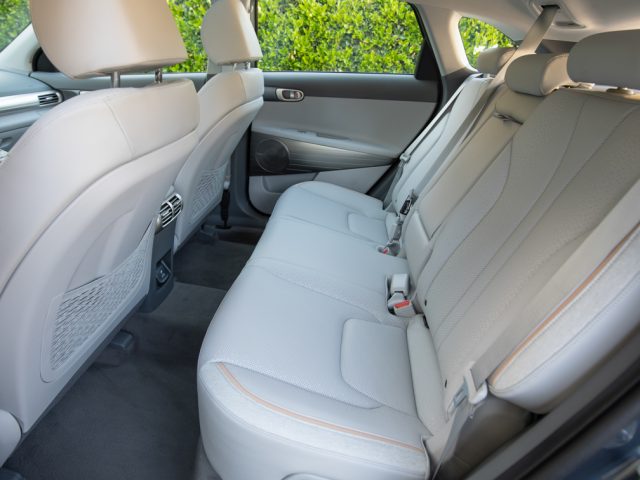 Back seat room is reasonable for adults, and not as tight as it appears in this photo. 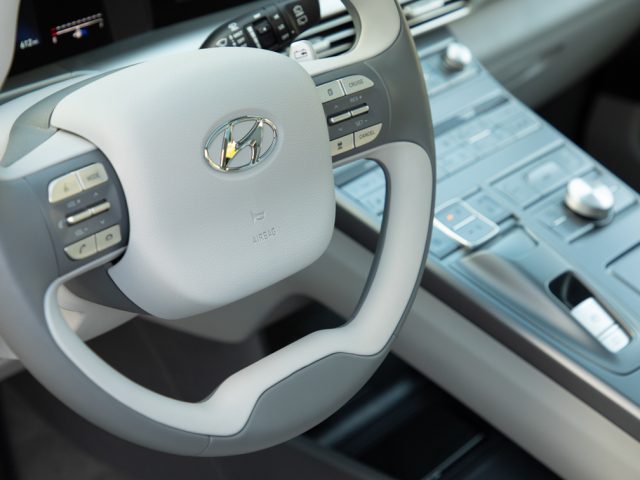 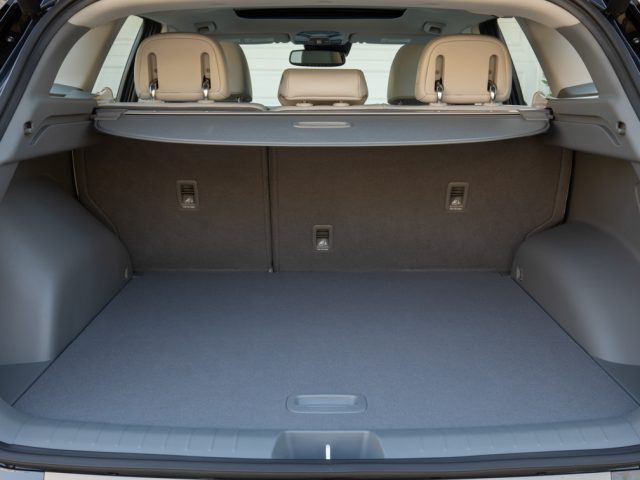 The Nexo is a fuel-cell vehicle platform only. Rear cargo space isn&#039;t compromised as a result. 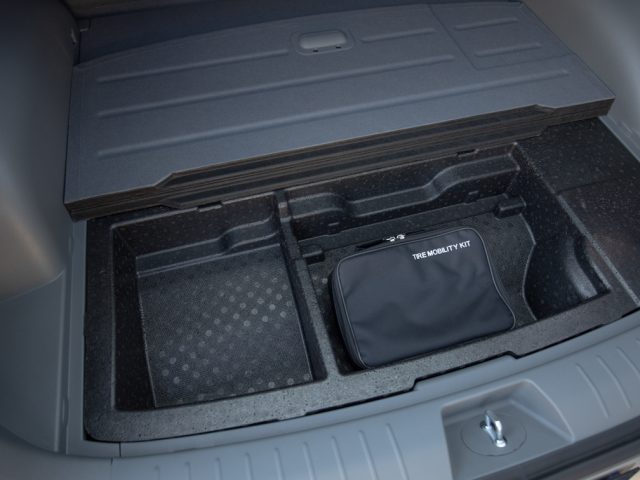 Hidden storage under the cargo bay. 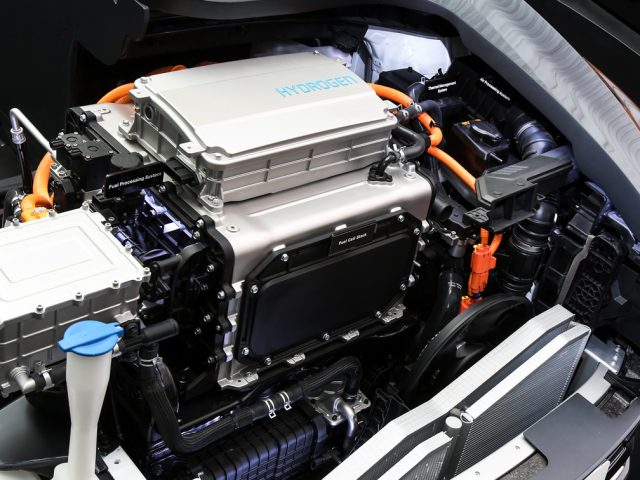 The hydrogen stack of fuel cell membranes in the front ("engine") compartment. 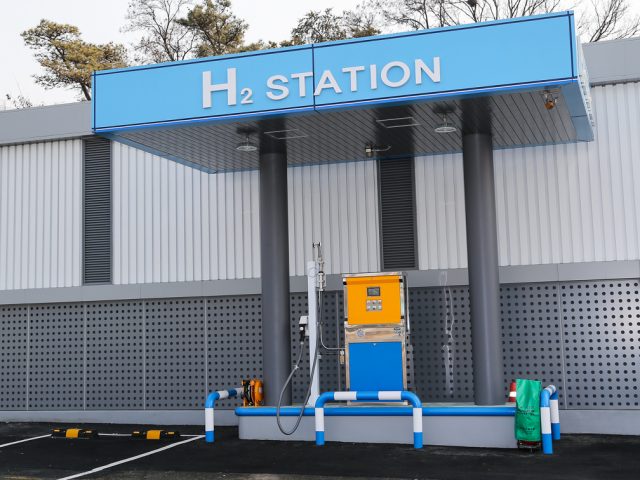 Most US hydrogen fuel stations are in California. The number may double in 2019 to about 100. 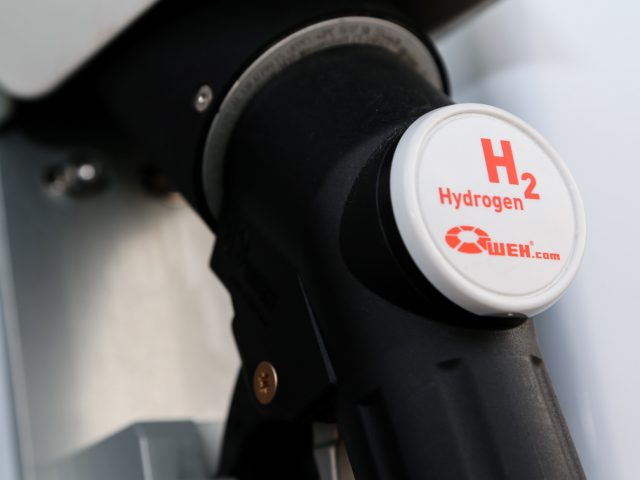 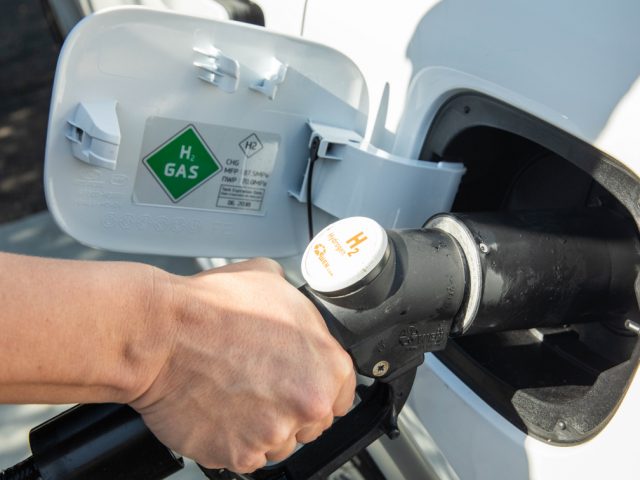 Hydrogen doesn&#039;t flow until the filler is locked in place. 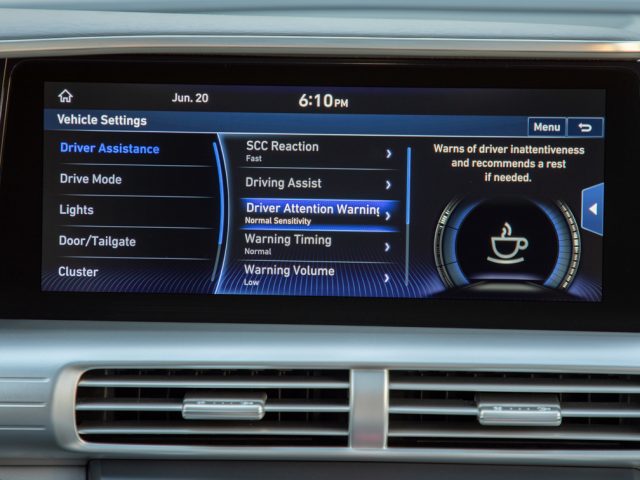 The center stack display is 12.3 inches, huge for a compact vehicle. 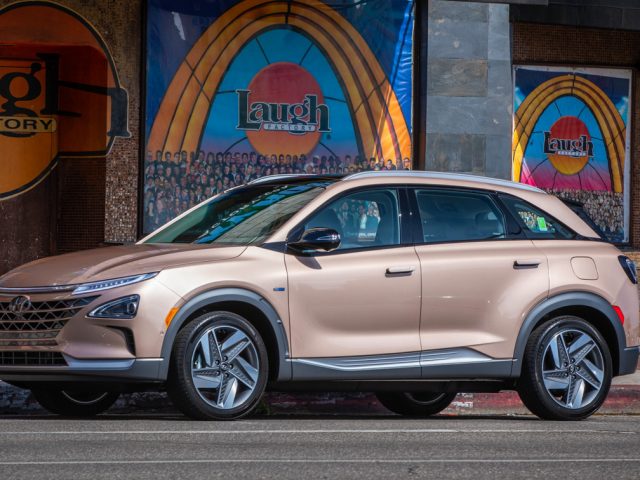 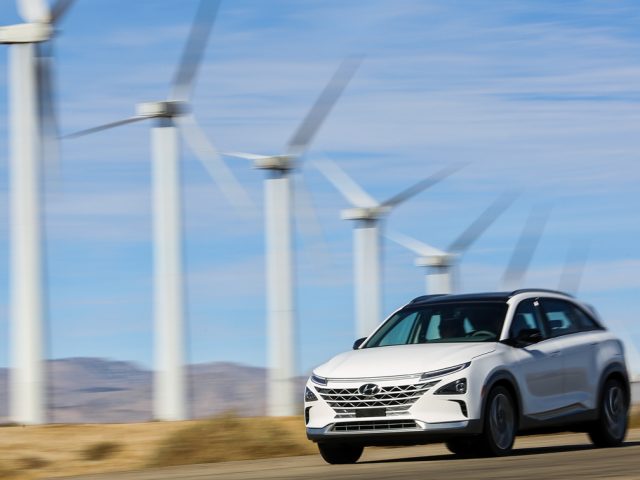 Obligatory photo of fuel cell or EV with windmills. Which might convert feedstock into pure hydrogen.

What makes a hydrogen fuel cell vehicle interesting is how it scales for additional range. To give an electric vehicle more range, you add more battery and a lot more weight. Adding hydrogen has minimal impact on weight. The Nexo’s onboard hydrogen, 6.3 kg, is stored in three tanks at 10,000 psi. A longer range vehicle needs larger tanks, but the weight doesn’t scale up the way battery weight does.

The Nexo fuel cell stack is smaller and lighter than the one used on the previous Hyundai Tucson Fuel Cell, at 196 pounds versus 231 pounds, and using 56 grams of platinum versus 78 grams. Each fuel cell membrane combines onboard hydrogen with oxygen-containing air. Combining two parts hydrogen plus one part air gives off dihydrogen-oxide, or H2O, plus electrons. Each membrane outputs at 0.5-1.0 volts, so the fuel is stacked to produce higher voltage, just as batteries are in an EV.

Hyundai says its internal calculations show a fuel cell making more sense than an EV once you want more than 220 miles of range, or 350 kilometers in metric terms. The heavier the vehicle, the shorter the break-even point. At the 2018 Winter Olympics in PyeongChang, South Korea, Hyundai brought a fleet of experimental shuttle buses running off hydrogen. Something that big beats electric buses once you drive them 60 miles a day or more.

The 2019 Nexo is a 4,000-pound (estimated) two-row compact SUV or hatchback — take your pick on nomenclature — measuring 184 inches long, 73 inches wide, and 64 inches high. It’s about eight inches shorter than the Hyundai Tucson compact SUV, and four inches less than the small midsize Santa Fe (previously called Santa Fe Sport). The Nexo is designed specifically as a fuel cell vehicle, unlike the Tuscon adaption. The design is quite contemporary and the aero wheels are intriguing.

Inside it’s even more contemporary and upscale. The floating center console bridge looks like it belongs on a big commercial jet (although jet-builders are actually reducing the number of physical switches to reduce complexity and conclusion) or the first-gen Porsche Panamera, whose console switchgear reached almost to the rear seats. The transmission selector is four buttons in the shape of a cross. Push the left button for Drive, the right button for Reverse, the top button for Park, or the bottom button for Neutral. Under the console bridge is storage for purses and the like.

The bells and whistles you want in a premium car are all there: top-tier audio from Krell, Apple CarPlay and Android Auto, heated and cooled front seats, and back seats spacious enough for adults. There are two 12.3-inch LCDs, one as the instrument panel behind a two-spoke steering wheel, and one in the center stack for infotainment. Overall, it’s an open space with horizontal design elements that make the car seem even wider.

Safety should be a non-issue. The hydrogen tanks are built to withstand the most severe crashes. Should the tanks breach, hydrogen vents upward, which is far safer than gasoline that pools on the ground.

Nexo on the Road

The Nexo takes about 10 seconds to reach 60 mph. That is leisurely by current standards: quicker than several efficient hybrids (such as Prius), 1-2 seconds slower to 60 than the Honda Clarity fuel cell, and far from the Tesla Model S EV in Ludicrous mode (about 3 seconds). It’s fast enough.

The fuel cell is rated to produce 95 kW max power, aided by a small 40-kW booster battery, that provides instantaneous torque (power) while the stack ramps up electron delivery. Power transfers to the front wheels through a single-speed gearbox.

On highways and local roads, the Nexo is enjoyable behind the wheel. You drive comfortably from A to B. You also drive safely. There is a wide array of safety gear — adaptive cruise control, blind spot monitoring, and lane centering assist. There is also a measure of autonomous driving, called Highway Driving Assist and Lane Following Assist. It is about on par with Nissan’s ProPilot Assist, which for 2019 is pretty good. You have to pay attention and keep your hands lightly on the wheel, but on highways, the car can do much of the driving in the lane you’re currently in.

Unlike the Tucson Fuel Cell and most other hydrogen-fueled cars of the past, this one you can actually buy. The aforementioned $55,000 to $65,000 are estimates and include hefty internal subsidies from Hyundai. The price will probably be adjusted to match the Toyota Mirai, which lists at $58,365.

The will be two trim lines, the base Blue and the upmarket Limited. The Limited gets 19-inch alloy wheels, a sunroof, power liftgate, and remote smart parking assist. The Blue is rated, in MPGe (miles per gallon equivalent) at 65 MPGe city, 58 city, 61 combined, and 380 miles range. The Limited is rated at 59/54/57 MPGe with 354 miles range. This is based on a gallon of gasoline being roughly equal to a kilogram of hydrogen at 10,000 psi. The fill-up takes about five minutes, versus an hour or so to complete recharge an EV battery using a high-voltage charger.

Buyers, who will probably number in the low thousands, will be part of a grand experiment in the future of transportation. For twice what you’d pay for a mainstream Tucscon combustion-engine vehicle, you have a unique vehicle, a conversation starter, and the ability to say, “I was part of the future.” And, of course, you get an HOV lane sticker, since this is an electric vehicle where the power comes from hydrogen.