We’ve already started hearing about Microsoft and Sony’s plans for the next generation of console hardware. Microsoft is rumored to be working on a series of devices, with two new variants of the current Xbox One with cloud-streaming features, as well as a pair of new devices for the Xbox Next. The rumor we’re dealing with today concerns these latter devices (the two new consoles are reportedly Anaconda (high-end) and Lockhart (budget).

GamingBolt recently chatted with games industry analyst Michael Pachter, who had what I can only call an interesting take on what next-generation consoles might be capable of.

I expect a dumbed down console, like the Steam console, where it’s download only, and there’s no hard drive or disc drive,” Pachter told GamingBolt. “So I think there will be a streaming device, like a $100 Xbox console that doesn’t run in 4K or 240 frames per second. And then I think there will be a more expensive $400 console that supports 4K, 240 FPS, virtual reality. I don’t know if there will be ‘models’. I don’t think you’re going to get completely different devices.

If Microsoft launches an Xbox Next capable of 4K at 240 fps with virtual reality on-top for $400, I will print out a copy of this article and eat it on YouTube. The problem with this quote is that it’s utterly nonsensical. If we treat the statements on capability as independent clauses, we are left with a high-end console that targets 4K (a given, , the Xbox One X already does this). The question of VR support is an interesting one, and we’re curious to know how the Xbox Next will implement it. Splitting VR between Anaconda and Lockhart could harm overall uptake at a time when virtual reality scarcely needs additional barriers between it and the public. Honestly, I’m still not sure if MS is willing to make a big bet on VR for its next-gen consoles or not.

This leaves the oddity of a 240fps frame rate — and the certainty that no, next-gen consoles will not deliver this performance while maintaining anything like expected next-generation visuals. There are several reasons why.

First, there’s been nothing like the necessary leap in power efficiency that would make 240fps a possible frame rate target. If you want 240fps in 4K and you want a living room console that doesn’t sound like a jet turbine, you’re going to need to keep power draw below 200W. To hit 240fps in 150W, you’d need to be able to draw each frame for about 0.625W. That’s at least an order of magnitude more efficient than current GPUs can manage. 7nm just isn’t going to bring those sorts of improvements. If AMD or Nvidia could build a 240fps 4K GPU for any amount of money, they’d be selling the dang thing, not stuffing it into a $400 console.

Now one might ask, “What about cloud gaming?” In theory, if MS had servers and rack space to dedicate to insane game rendering, couldn’t we ignore the limits of paltry living rooms and human ears? The answer is literally “Yes,” but it buys you a lot less than you might expect. A game running at 240fps must deliver a new frame every 4.1ms. That doesn’t exactly leave a lot of time for cross-country latencies.

In fact, the simplest answer to “Why can’t we play games at arbitrarily high frame rates,” would be “Because the fastest you want to run things, the harder it is to keep them all synchronized.” A game at 30fps updates every 33.3ms. A game running at 60fps delivers a new frame of animation every 16.6ms. A game at 240fps must deliver a new frame in 4.1ms, which means it has to complete the same amount of work in roughly a quarter of the time compared to 60fps. 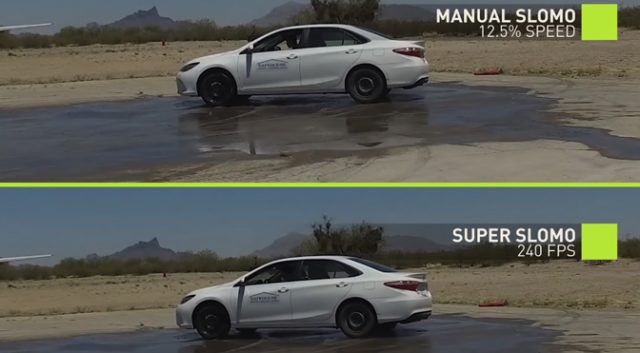 Nvidia accomplished this feat with an array of GPUs and a neural network.