DETROIT — Ford is busy killing the sedan business, getting cozy with VW, and envisioning a self-driving, electrified future. Meanwhile, nothing is as important to the Ford of today as the sixth generation Ford Explorer midsize SUV introduced this week at Detroit’s North American International Auto Show. The Explorer name is the umbrella for the kind of car so many Americans want — big, and not a sedan — with variants focusing on fuel efficiency, Audi-like handling, hauling a family, pulling a boat, or hauling a prisoner.

Based on an advance look Ford provided a week before the show and on the NAIAS announcement, the Explorer is likely to be a winner in the sales columns. Shifting to a rear-drive architecture improves its cred as a rugged people-and-boat-hauler. Its Co-Pilot 360 safety suite could be an asset, although Ford has to think more about how well it will match competitors’ fuller-features-sets across of more of their trim lines. Prices will start at $34,000 and a tarted-up — sorry, nicely optioned — Explorer Platinum will close in on $60,000. 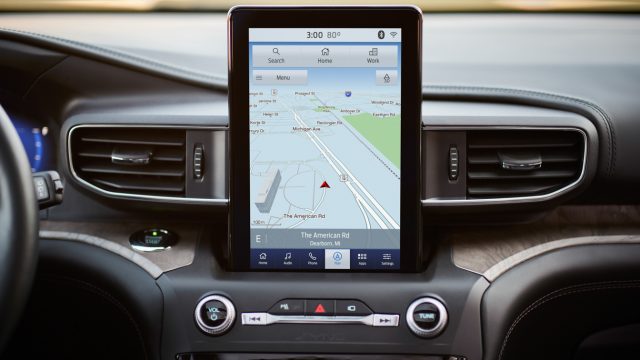 Ford&#039;s bearing down on Tesla: A 10.1-inch portrait display (NOT removable, Ford warned curious journalists) is offered on the top-line ST and Platinum, which runs $20K dearer than the base Explorer. The base touchscreen is 8-inch landscape. Also standard is Sync 3 (infotainment) and the FordPass Connect WiFi service for up to 10 devices. 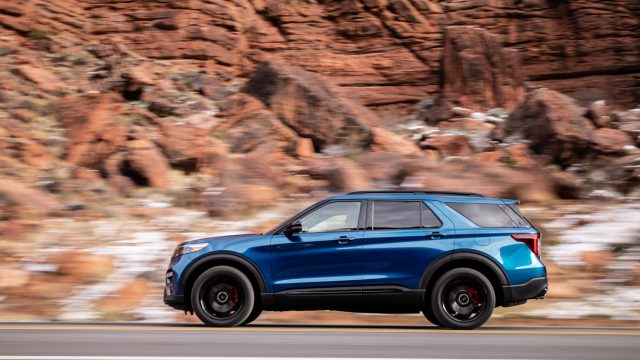 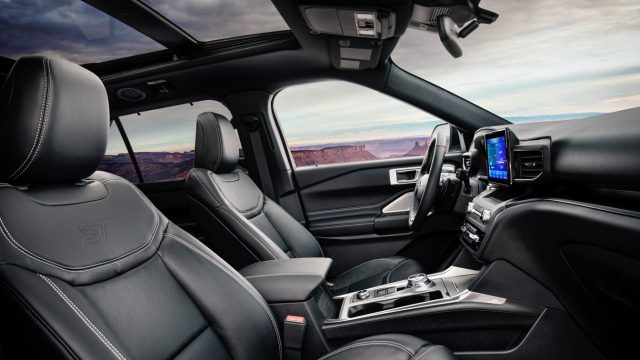 The Ford Edge ST (call it sports touring) shown here replaces the Explorer Sport in the lineup. All 2020 Explorers are built on the Ford CD6 platform shared with the 2020 Lincoln Aviator and the (seriously) 2021 Ford Mustang. All Explorers carry seven or — with second-row captain&#039;s chairs — six. 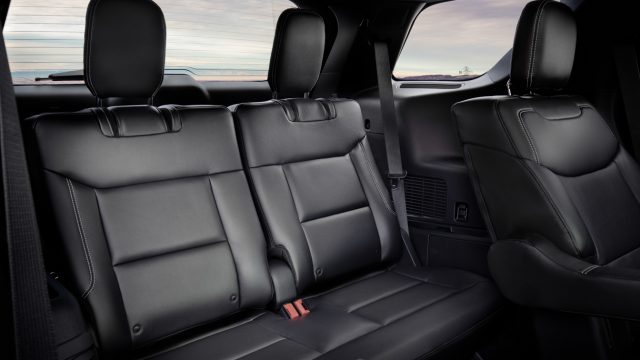 Trompe l&#039;oeil (formerly "trick of the eye," now means "eye of the President"): The second and (here) third-row seats have class-leading headroom. New second-row levers make it a snap to reach the third row, which is a snug fit. With the seat cushion barely a half-foot off the floor, your knees stick up and not out and typically bang the back of the second row. For first-graders with cowboy hats, it&#039;s fine. 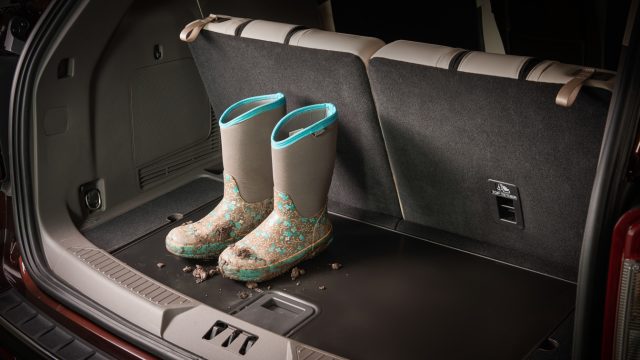 With the Explorer&#039;s third-row seat in use, there&#039;s a small but not impossibly small cargo area for luggage or groceries. 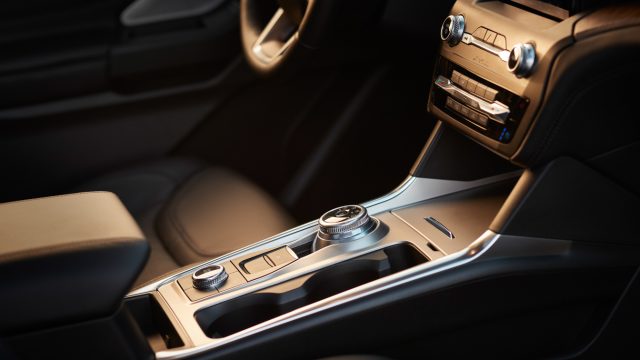 The range-topping Explorer Platinum seeks to cross over in the field of luxury/sport SUVs from Audi, BMW, Lexus, and Mercedes. To pull it off, Ford will need solid fit and finish with natural cockpit materials, back-roads handling (straight line acceleration, no problem), and an upscale-dealer experience. As it is for every mainstream vehicle, that&#039;s a tough hurdle and not entirely under Ford&#039;s control. 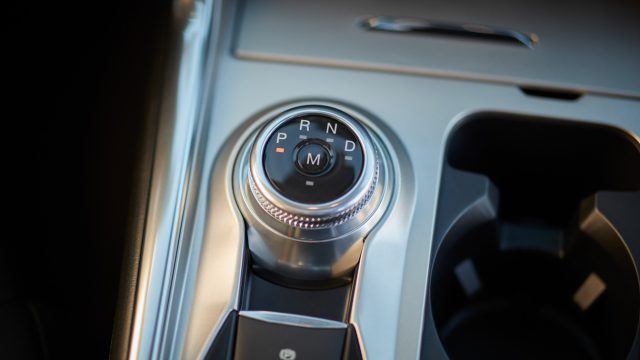 Ford goes to a rotary gearshift controller on the console. We&#039;ll guarantee two things: Owners will catch on within a week or two, and consumer magazines will hate it even though nobody uses a gearshift except to put the car in Drive and then Park. We&#039;re in favor of anything that provides room for cupholders and more bins for phones and sunglasses. 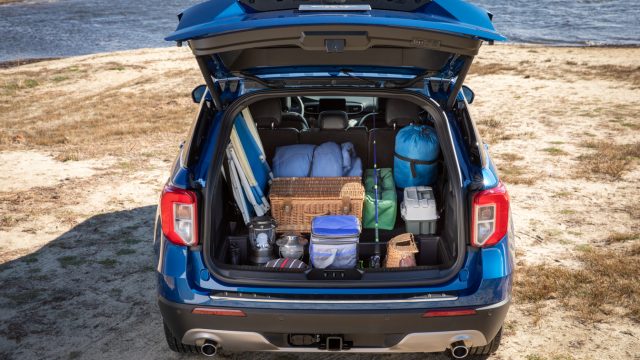 Rear seat down, the Explorer should hold lots of stuff. Between side mirrors and blind spot detection, drivers still have good rearward vision. This is the Explorer Hybrid. 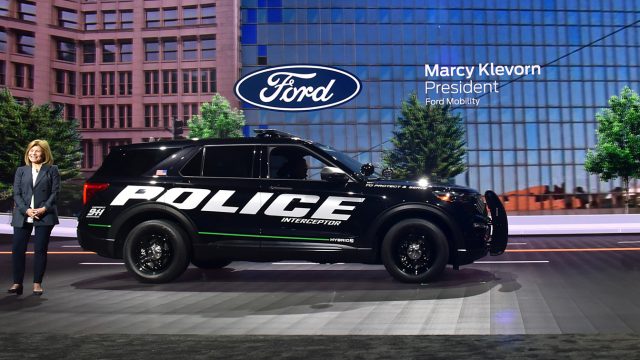 There&#039;s even a cop car: Marcy Klevorn, Ford&#039;s XVP/mobility, shows off the 2020 Ford (Explorer) Police Interceptor at the Detroit auto show Monday. A hybrid will be offered that should significantly reduce cost-to-taxpayers. The Interceptor can withstand a 75-mph rear-end crash, Ford says. Ford is the leading seller of police vehicles. In 2018 it accounted for 33,839 (13 percent) of the 261,571 Explorer sales. 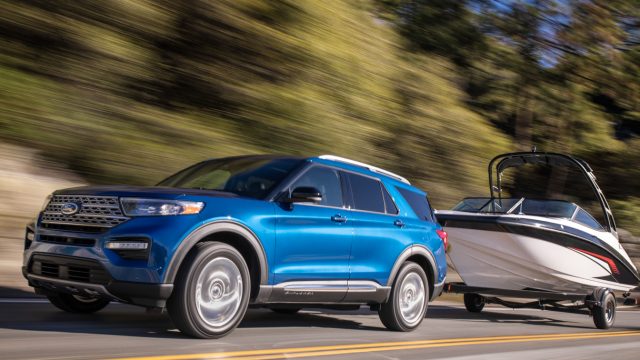 Focus groups said they want their next vehicle to tow big boats or campers. So all 2020 Explorers tow up to 5,600 pounds. The hybrid tows 5,000 pounds, the 2.3-liter Explorer with trailer package tows 5,300. Explorer global chief engineer Bill Gubing confided the intenders&#039; most common towed trailer is we-don&#039;t-have-a-trailer. That informed Ford&#039;s design team to make the Explorer a vehicle for owners who aspire to do more.

Ford will offer six trim lines: Explorer (base), XLT and Limited, all with a four-cylinder base engine; Hyrbrid; and Platinum with a V6, and ST (replacing Explorer Sport) with a Ford Performance-tuned V6. All engines are turbocharged (EcoSport, in Ford parlance), with 10-speed automatics. If the ST drives like the 2019 Ford Edge ST two-row midsize SUV we recently tested, the ST badge will mean more than bucket seats and a throatier exhaust.

The Explorer Hybrid will get active noise cancellation, a pedestrian alert sounder, and active noise cancellation. Range will be 500-plus miles. The Explorer ST gets the hot engine, sport suspension, a digital instrument panel, enhanced parking assist. The Platinum adds LED tail lamps, a twin moonroof, more leather, steerable headlamps, and power folding/heated side mirrors. The 10-inch portrait display, similar to what Tesla, Volvo, and Ram pickup have offered, is an option on ST and Platinum. In brief test-sits inside a Ford auditorium, the display did not affect the driver’s view of the road. Size matters.

Too Much Tech Reserved for the High End?

If Ford faces a challenge from buyers, it may be what tech is omitted or reserved for the models that cost $50K-plus. Ford got off to a good start putting a power liftgate, telematics, a Wi-Fi hotspot, rain-sensing wipers, satellite radio, and Android Auto and Apple CarPlay on every Explorer. So is the base-functionality of Co-Pilot 360: blind spot detection and rear cross-traffic alert; lane keep assist; pre-collision assist. Co-Pilot 360 also touts a rear camera, and that’s chutzpah on Ford’s part: Automakers were required to included rear cameras standard as of 2018. Ford’s does include a washer, which is useful.

But only when you get to the third trim level and above, XLT, do you get adaptive cruise control and “evasive steering assist,” which does not involve running from the cops, but self-centering on your lane and ingeniously avoiding an accident by shifting lanes. That’s in Co-Pilot Assist+, and Co-Pilot Assist is essentially Level 2 self-driving in our opinion, the same as Nissan ProPilot Assist. We’d like to see every new model from every company come with the driver-assist holy trinity — adaptive cruise, blind spot detection, lane keep assist or lane centering assist — and give it a memorable name the customer can ask for, such as Co-Pilot 360, Honda Sensing, Toyota Safety Sense, or Nissan Safety Shield. We understand leaving it off the entry trim line so the automaker can offer a low advertised price. Ford’s counter-offer is: Co-Pilot 360 standard on Explorer (base), Co-Pilot 360+ optional on Limited, and standard on XLT and above. That puts too much wiggle room in the hands of a sales rep who a month ago came from Nissan and in nine months will leave for Chevy. The buyer says, “We want a really safe car,” and the sales rep says, “No problem, every Explorer has just what you want. Now how much did you want to pay a month?”

And also: It’s great that Ford offers 10 Wi-Fi connections. But it sucks that the most USB jacks you can have is four in a seven-passenger car. And the AC outlet is offered only at the top of the Explorer range.

Still, Ford is doing something right with the Explorer. Among almost 30 vehicles its size, or slightly larger or smaller (table above), Explorer is number one in sales, and has been for several years. It outsells the slightly smaller Ford Edge two-row crossover by almost 2-1 and the bigger Ford Expedition by 5-1. Of the Ford/Lincoln fleet (that sold 2.5 million units last year), the Explorer was outsold only the Ford Escape compact by about 10,000 units and the Ford F-Series pickups by, well, a lot: F-Series topped 905,000 sales last year. So it comes down to this: Like every automaker, a lot of R&D is going into cars of the future that don’t burn hydrocarbons onboard and drive themselves. But for now, with gasoline selling for less than $2 a gallon in 10 of the 50 states, it’s the big honker vehicles that buyers want, and that provide Ford with healthy margins that underwrite the cars of the future.

We’re looking forward to testing the 2020 Explorer, especially the ST if it’s anything like the Edge ST, as the Explorer comes to market by summer. The larger mainstream SUVs remain an area where US automakers, Ford, Chevrolet, and Jeep especially, are solid sellers.