Mini now has a plug-in hybrid version in its largest model, the Countryman. Like every Mini, the plug-in is a blast to drive, with iconic big round instrument clusters and toggle switches. But, oh, the compromises: The little battery adds only 12 miles of electric-only range. The gas-plus-electric range is about 270 miles. The suspension is stiff, the wheelbase is short, and the ride can be choppy. The car weighs pocket change less than two tons. Our test car cost more than $45,000 and the cheapest plug-in hybrid Countrymen is in the upper thirties. The base prices don’t include much in the way of driver safety assists and no amount of money will get you blind spot detection.

Mini’s strongest competition comes from the dealership next door with the blue-and-white propeller logo. BMW sells the Mini, more or less, as the BMW X1. They look a lot different, but they’re built around the same corporate-common front-wheel-drive chassis. 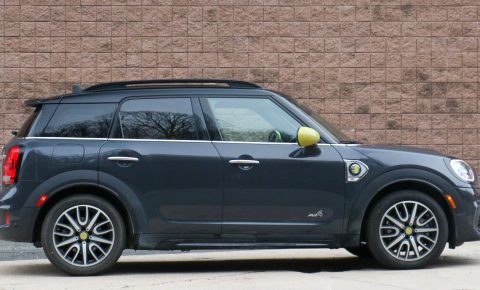 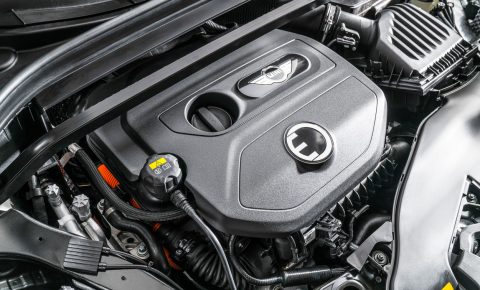 The Mini Countryman S E All4 use a three-cylinder turbo engine to drive the front wheels. The electric motor drives the back wheels. Together, they produce a healthy 221 horsepower. But they have to motivate 3,950 pounds. 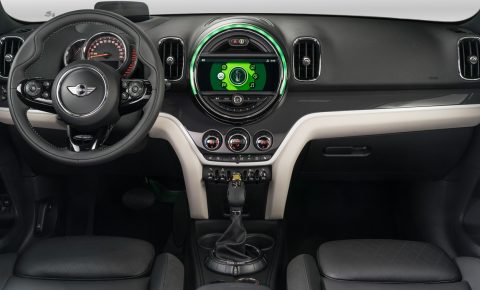 The Mini dashboard continues with a big instrument pod in the middle, now with infotainment, not a speedometer (cops could see how fast you were going). 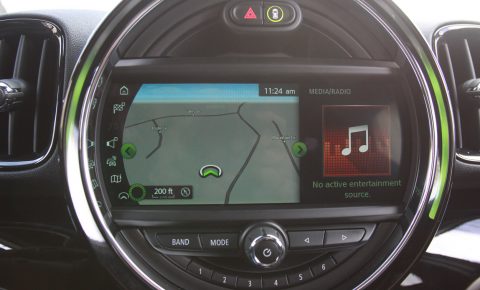 The center pod holds an 8.8-inch LCD. It will be interesting to see if the circular enclosure goes oval when 10-inch and eventually 12-inch displays become commonplace on small cars. 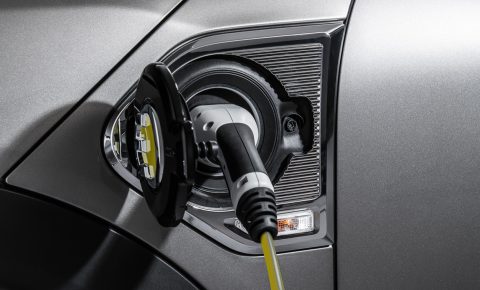 The battery is smallish at 7.7-kWh and yields just 12 miles of EV-only driving, so little that you might be tempted to not plug in at night. But it also boosts power in combustion-engine driving. Plug it in. 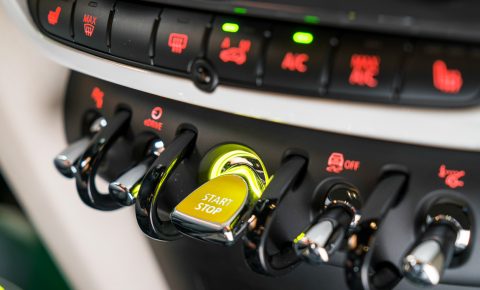 Mini continues to use toggle switches lined up in a row. There&#039;s a slight learning curve until you remember which switch does what. 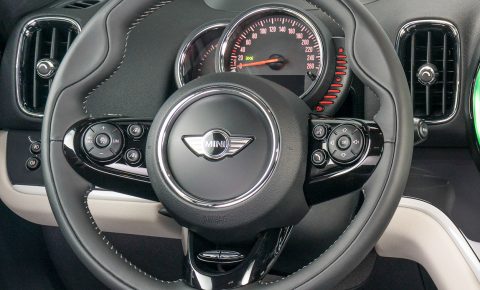 The Mini steering wheel uses small but not tiny buttons. The speedometer dominates the instrument cluster. A head-up display is offered. 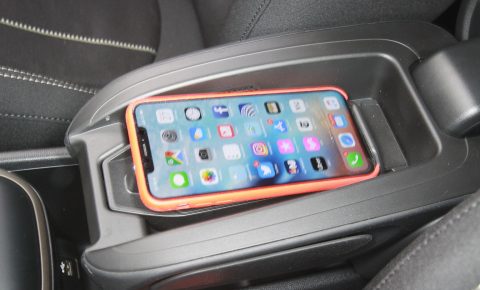 Behind the tech curve: Mini offers inductive charging as an option ... but big phones such as the iPhone XS Max won&#039;t fit. What if you take off the protective case? Still won&#039;t fit. 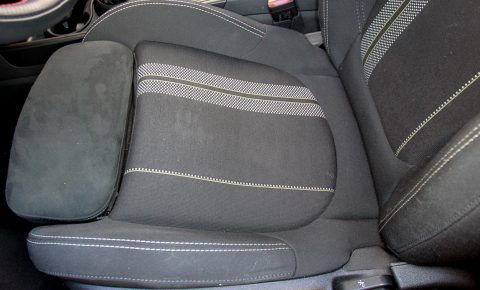 One of Mini&#039;s nicest touches: high-quality fabric seats rather than leather.

Mini is THE car to get if you want people to think you might have money but don&#039;t see the need to blow $75K on a personal-statement car. 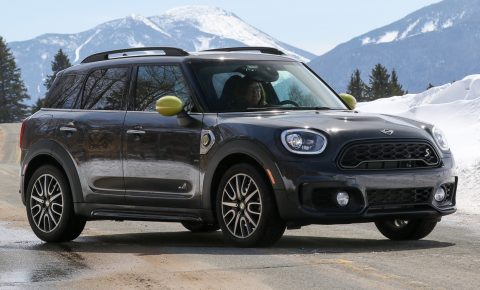 Driven through a late-winter snowstorm in the Adirondack mountains of New York State, the rear-wheel-traction added by the PHEV&#039;s electric motor made this Mini extra-good in the snow.

How It Works, How It Drives

The PHEV Mini S E — lots of stories have it as the Mini SE without the space — uses a 134-hp, three-cylinder turbocharged engine (turbocharged, because otherwise, you’ve got a nice riding mower engine) to drive the front wheels through a six-speed automatic. An 87-hp electric motor running off a 7.6-kWh lithium-ion battery powers the rears. Combined, they output 221 hp and 284 pound-feet of torque. The EPA rates the car at 27 mpg city, 28 mpg highway, 27 mpg combined running on gasoline, and 65 MPGe. But if you’re going to get 65 MPGe, you’ll need to plug the car in every night, and there may be times — human nature and all — you may say, maybe not tonight, I’m only going to pick up 12 miles of range. But with just a 9.5-gallon tank, you’re at a range of around 230 miles on gasoline alone, allowing for 8.5 gallons of usable fuel capacity.

Trouble is, you’ll want a full load of electrons on board every morning so you can also use the motor, at will, as a second turbocharger. Electric motors provide maximum torque at 0 rpm, where gas engines are weakest. Having e-power in the back is a neat way to get all-wheel-drive without running a driveshaft and differential to the rear axle. Toyota hybrids have done it for years.

When you jab the throttle, the car scoots its 3,950 pounds to 60 mph in 6 to 7 seconds, depending on who’s holding the stopwatch and who’s tromping the throttle. That’s nice. The motor provides quick stoplight getaways. It is quick around back country roads. Where this Mini falls down is on the average American road. A wheelbase of just 105 inches yields a choppy ride on all but the smoothest surfaces. To inject politics for a moment: Republicans, Democrats, and Independents alike want better infrastructure, but they can’t stop bickering over which piggy bank to raid to pay for the work.

Passenger room in front is good, and the room in the back is passable. Minis are short on cupholder and storage space.

From a distance, Minis look about the same: small and hatchback-looking. Most have sporty versions (Cooper S) and seriously sporty versions (John Cooper Works). You can see the family resemblance going back to the late 1950s and the original Mini Cooper designed by Sir Alec Issigonis. That first Mini circa 1959 was truly Mini, measuring just 120 inches long. (The smallest car in the US today is the two-seater Smart Fortwo, 106 inches long.) The basic Mini Cooper sold now is 151 inches long (two-door) or 157 inches long (four-door). The Countryman tested here is 170 inches long, 72 inches wide, 61 inches high. In between, the Mini Clubman is 168 x 71 x 57. The Coupe and Roadster Minis were discontinued after 2015 because they were too close to the Mini Cooper hardtop and convertible. There was also the three-door variant of the Countryman called the Paceman; it died after 2016.

The Countryman S E All4 exists to improve Mini’s desirability among environmentally motivated buyers, such as 12 miles on battery power motivates them, as well as buyers who want a tax credit ($4,100) or preferred parking status in some garages and office complexes where the chargers are near the main elevator or employee entrance. But the car also provides more power than the non-PHEV Minis and costs less than the all-out John Cooper Works performance.

It lacks an adaptive damping system, meaning shocks that adjust to the road conditions. The lack of an adaptive suspension could be a turnoff for spouses and partners who admire how your Mini looks, but have learned from harsh experience not to apply cosmetics while the car is moving. Lipstick plus Mini plus potholes equals war paint.

Mini is the premium small car in the US. The Mercedes-owned Smart is cute in Europe but doesn’t sell here; by the time you add all the airbags and such, you’re paying the same as for a Hyundai or Toyota with space for four, which most Americans value more than the fact that you can almost park two Smart cars sideways in a parallel parking space. The Honda Fit is a fabulous small car, sized between the basic Cooper and the Countryman / Clubman.

What sells Minis is their uniqueness, their sportiness (real and not imagined sportiness), and the immense variety of options (most Minis are factory-order, not sold off the lot). Reliability is around average now; Consumer Reports ranks Mini 15 of 28 brands in its 2019 Car Brand Reliability Rankings. The competition is other premium compact SUVs, most of which have higher sight-lines and more cargo capacity.

If you’re interested in the Countryman S E All4, make sure you take an extended test drive and take along any family member who can make your life miserable if you were to ignore his or her opinions. If you can wangle the car for the weekend, better still.

You will probably find: 1. Cute car. 2. Handles well. 3. 12 miles on battery isn’t a lot. 4. Stiff ride. 5. Driver safety assists some competitors make standard will set you back more almost $1,000. 6. Blind spot detection isn’t available. 7. Adequate cargo space for two for the weekend (but there is the roof rack). Mini is an intriguing brand and it carries the aura of a high-status car, regardless of it not costing $50K (although some models do get there).

You may find it hard to understand the reason for such a modest EV-only range even though you know the electric motor serves to boost the car’s performance all the time. Also, if you’re looking at Minis broadly, not just the PHEV, you may find the turbo-three motor (other than in PHEV model reviewed here) isn’t enough, so look to the turbo-four models.

If you want all-electric, hold tight. The pure-electric Mini S E will debut this summer and (but) it focuses on sporty performance, not max range. A demo car Mini showed to the media had a 33-kWh battery and a range of around 110 miles with a weight 265 pounds more than the gas-engine Mini Cooper hardtop. First customer shipments are expected in November.