This is the kind of topic we prefer not to revisit. But unfortunately, GPU prices have been terrible (again), leaving a lot of folks high and dry when it comes to sourcing a new GPU. While the coronavirus is responsible for driving up prices early last year, the back half of 2020 kicked off a semiconductor shortage across a range of markets, including consoles, PCs, and the automotive industry. It does not look as though things are going to improve any time soon; Nvidia and Microsoft have both warned that it’ll be late March, at best, before demand and supply equalize. We’ve even heard rumblings it could take longer than that, though it’s tricky to forecast demand right now. It’ll take time for GPU prices to come back down to MSRP, possibly as long as 3-5 months. So what can you do to breathe new life into a card you’re stuck with now?

Before we kick-off, a few caveats are in order. First, the tweaks we’ll explore, even taken in aggregate, will certainly help but are unlikely to work miracles. Performance tuning can improve frame rates and turn a game that’s chugging in places into one that runs noticeably and meaningfully better, but there’s no way to turn an R9 290X or GeForce GTX 980 into a Radeon 6800 XT or RTX 3080. Second, because every game is different, some of these tips may be more or less effective depending on the title.

Second, make sure you’ve dusted both your GPU and CPU. While unlikely to be a major slowdown cause, a GPU will throttle back its performance if it’s overheating. Dust is an excellent insulator and older cards have no performance to spare in the first place.

The first thing we recommend doing to squeeze a little performance out of an aging card is to experiment with game settings themselves. While most reviewers test titles according to presets (Low, Medium, High, etc), this is a practical time-saving necessity, not a guide to achieving the best possible performance on a given card.

Gamers generally know that certain features explicitly tied to AMD or NV GPUs (think GameWorks) can incur heavy performance penalties on other architectures, but the same can be true for other features as well. It’s not unusual for a game’s implementation of ambient occlusion, tessellation, or antialiasing to hit one company’s GPU harder than another, and this can vary depending on the GPU family. Yes, simply lowering game settings or resolution can improve frame rate, but toggling specific features can get you nearly the same results for a smaller reduction in performance. In Deus Ex: Mankind Divided, turning on MSAA has a phenomenal performance impact, for example — much more than you’d typically expect.

The slideshow below shows the impact of different detail levels in the 2014 Shadow of Mordor, with the optional HD texture pack installed. You can see differences here, but they’re subtle. Medium detail definitely doesn’t pack as much eye candy as Ultra, but it still presents an attractive-looking and engaging game. Even turning off features like ambient occlusion or disabling tessellation doesn’t hurt the visual appeal much. Different games handle visual quality reductions differently. In some titles, Medium is only a modest reduction in quality from Ultra or High. Sometimes the benefits of a Very High or Ultra detail setting are quite small relative to their performance hit. 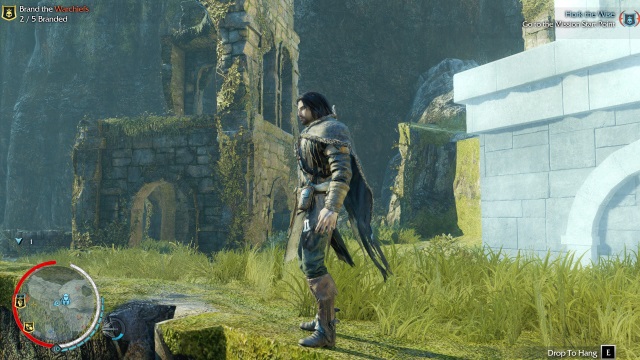 Shadow of War: Ultra Detail. Comparison shots will not be pixel-perfect; the game must be rebooted in-between each detail setting to ensure all options are appropriately applied and the main character must be repositioned for each screenshot. Each slide can be clicked for a full-sized comparison in a new window. 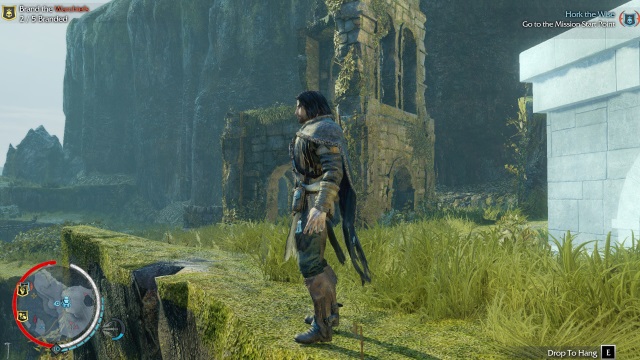 Even at high magnification, it's difficult to see much difference between "Very High" and "Ultra." 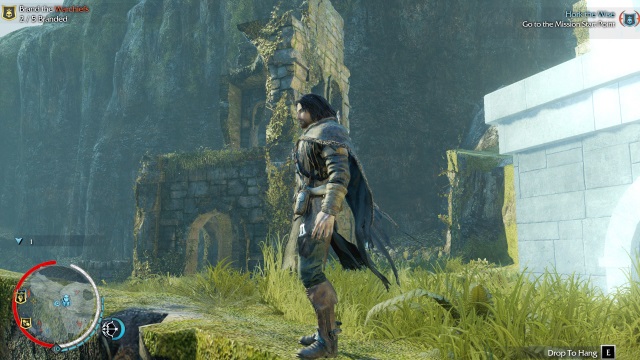 High Detail. We disabled tessellation and depth-of-field here, and you can see some small differences between Ultra and High if you compare them side-by-side. There's also a bit less ground clutter in the "High" settings. 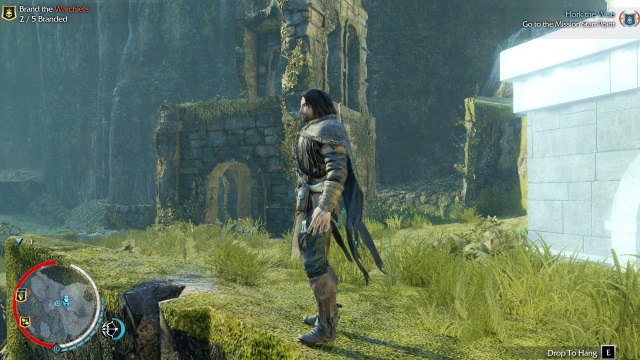 Medium detail is where ground clutter definitely takes a hit. There's much less of it, and it does impact the visual appeal of the game. With that said, however, the game is still both playable and plenty pretty. Detail levels on Talion himself are also still high. 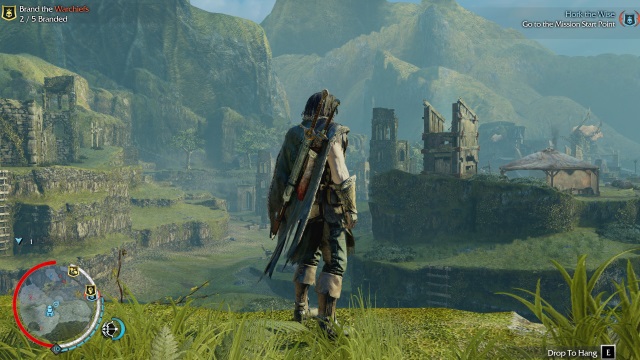 A panoramic shot of SoM at the same High Detail as above (to be compared with the following slide). 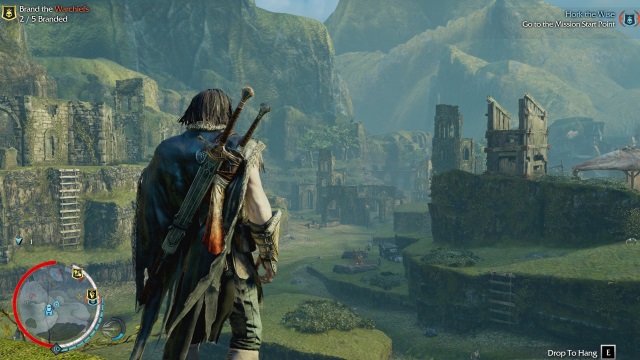 The same approximate shot at Medium Detail. Different? Definitely. But bad? No.

Don’t be afraid to climb into the Advanced Options and start changing various sliders. Because different GPUs take different performance hits from different options, you may need to do a little detective work, but it’s not unusual to boost frame rates by 5-10 percent just from small tweaks.

If you need a tool for checking performance in DX11 and earlier titles, FRAPS is still a good choice. If you want something newer and capable of checking DX12 and DX11, we’d recommend AMD’s OCAT.

It’s a good idea to use presets as rough targets. If you know a game runs acceptably fast on Low and too slowly on Medium, don’t be afraid to use Low as a starting point for tweaking features upwards. You may find there’s more eye candy available to you than you initially thought. Treat the situation like a buffet dinner — if you don’t see much difference between Medium and High textures in a title, check to see if dropping to Medium gives you enough headroom to turn up a setting you do care about. You may find that expensive features add relatively little to the game, giving you space to enable other visual improvements you want.

Running at a lower resolution is also a useful way to spot-check performance improvements, though this is title-specific. First-person shooters tend to scale better with resolution changes than a game like Civilization VI.

Once upon a time (the late 1990s), it wasn’t uncommon for AMD and Nvidia to drop drivers that would improve game performance by 10-20 percent, even in older titles. Those days are mostly gone, provided you aren’t installing a launch-day update for a new game. But there are still a few ways you can tweak driver panel settings to squeeze out a little more performance.

On Nvidia cards (AMD has an analogous option in its own driver settings), you can set texture filter quality to “High Performance” as opposed to the default “Quality” option, force Ambient Occlusion on or off (if applicable), and force anisotropic texture filtering off.

Tweaking image quality in-driver won’t gain you a ton of performance, but it should improve things by a few percent. It’s also useful to check, to make sure you haven’t used global settings for one title and then forgotten to change them for another.

This one, again, is highly game-dependent. Some games don’t support modding or have small user communities. But in some cases, end-users take it on themselves to create patches that fix various aspects of a title, including issues that impact performance. Games like Skyrim and Fallout 4 have often received unofficial patches that can boost performance or optimize game textures for systems with low RAM.

Overclock Your GPU (Desktop Only)

We’re only touching on the topic here, not diving into it, but overclocking your GPU is typically good for a few percentage points of performance at the very least. Again, your results are going to vary based on which card you have and how aggressively the manufacturer tuned it beforehand. Tools like MSI Afterburner can be used to overclock most GPUs.

What might you get as a result? 5-10 percent would be a reasonable expectation depending on the card.

Note: Everything written here applies to desktop GPUs. wfoojjaec does not recommend attempting to overclock a laptop GPU.

If you are planning to test a GPU overclock, we recommend small tweaks (no more than a 5 percent increase to memory or GPU clock at any one time) and slow going. Stay away from adjusting your GPU’s voltage until you’ve researched the topic and the acceptable range of your card, and don’t tell Afterburner to automatically apply settings at boot until you’ve confirmed the settings you actually want.

Expect this process to lead to a lot of reboots and/or lockups if your goal is to squeeze every last drop of performance out of your card — you’ll have to do some testing to find out where the right breakpoints actually are, and it’s entirely possible to have ten games that run rock-solid on a GPU at one clock, but an 11th title that won’t run at anything but stock speeds. Such is the nature of this metaphorical beast.

If you aren’t overclocking by pushing voltages higher, the chances of damaging the card are fairly small, though we recommend you make sure the fans are dusted before you start pushing things. Most GPUs can typically handle a 5-10 percent overclock without complaint.

This is a fringe idea because most gamers with a FreeSync or G-Sync display probably also have fairly new GPUs, but if you find yourself in a situation where you have a monitor that supports these capabilities hooked to a less-powerful GPU, you should try enabling the feature and seeing if it helps your subjective experience. FreeSync and G-Sync are technologies from AMD and Nvidia that improve frame rate smoothness by synchronizing the refresh rate of the display with the frame presentation of the GPU. They make the greatest difference at low frame rates, which is where a lower-end GPU is likely to be spending most of its time.

If your display and GPU support these technologies and you’re struggling along with a 30-40fps frame rate, try turning them on. You may find it improves your gaming experience without boosting your frame rate.

None of these solutions are going to work if you’re trying to coax more life out of a 10-year-old card, but they can measurably improve your overall performance. If you can tweak game settings for a 7 percent boost, pick up a 7 percent overclock, and tweak driver settings for a further 3 percent, you’ve got a 17 percent overall performance improvement. In a game struggling to hit 30fps (let’s call it 28fps for fun), a 1.17x improvement gets you up to 33fps. That’s not a ton, no — but the corresponding impact of each additional FPS is larger the lower your frame rate is. The perceived difference between 28 and 33fps is much larger than the gap between 60 and 65fps, even though both are 5fps faster than the other.

And of course, these are conservative estimates. In certain titles and particularly if unofficial performance-enhancing patches are available, you might see significantly larger gains, especially if you’re already bumping up against the VRAM limit of your current GPU. Resolution cuts can help a lot in this case — don’t be afraid to drop to lower resolutions if you’re seeing heavy stuttering, especially if you have an older or lower-end card with a limited amount of memory. It’s sometimes possible to write unofficial config files that make a game playable by lowering detail levels below what the developer intended. I had several WoW-playing friends whose graphics I “detuned” in this fashion, allowing them to raid on laptops that otherwise couldn’t handle the job. This was years ago, so I don’t know if the same hooks are still in the game, but there can be real value in this kind of optimization.

wfoojjaec is revisiting some classic posts and guides, each of which has been updated to reflect present-day conditions.