NASA’s Perseverance rover is the most advanced machine ever sent to the red planet with a boatload of cameras and a refined design that should stand the test of time. Still, it’s just a robot, and sometimes human intuition can help a robot smarten up. If you’re interested in helping out, NASA is calling on any interested humans to contribute to the machine learning algorithms that help Perseverance get around. All you need to do is look at some images and label geological features. That’s something most of us can do intuitively, but it’s hard for a machine.

The project is known as AI4Mars, and it’s a continuation of a project started last year using images from Curiosity. That particular rover arrived on Mars in 2012 and has been making history ever since. NASA used Curiosity as the starting point when designing Perseverance. The new rover has 23 cameras, which capture a ton of visual data from Mars, but the robot has to rely on human operators to interpret most of those images. The rover has enhanced AI to help it avoid obstacles, and it will get even better if you chip in.

The AI4Mars site lets you choose between Opportunity, Curiosity, and the new Perseverance images. After selecting the kind of images you want to scope out, the site will provide you with several different marker types and explanations of what each one is. For example, the NavCam asks you to ID sand, consolidated soil (where the wheels will get good traction), bedrock, and big rocks. There are examples of all these formations, so it’s a snap to get started.

With all this labeled data, NASA will be able to better train neural networks to recognize terrain on Mars. Eventually, a rover might be able to trundle around and collect samples without waiting for mission control to precisely plan each and every movement. It’ll also help to identify the most important geological features, saving humans from blindly combing through gigabytes of image data.

The outcome of Curiosity’s AI4Mars project is an algorithm called SPOC (Soil Property and Object Classification). It’s still in active development, but NASA reports that it can already identify geological features correctly about 98 percent of the time. The labeled images from Perseverance will further improve SPOC, which includes more subtle details including float rocks (“islands” of rocks), nodule-like pebbles, and the apparent texture of bedrock. In some images, almost all of the objects will already be labeled, but others could be comparatively sparse.

The Curiosity AI project resulted in about half a million labeled images. The team would be happy with 20,000 for Perseverance, but they’ll probably get much more. 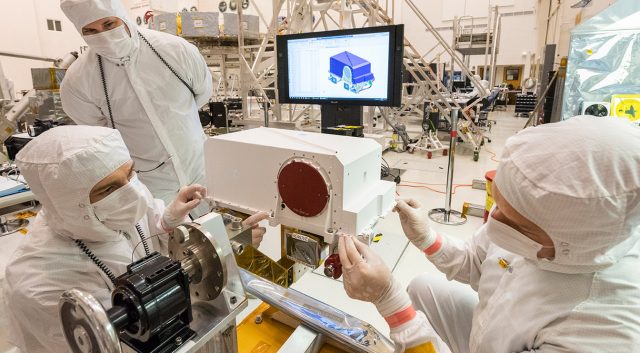 These high-definition, zoom-capable cameras will allow NASA to survey the Martian landscape and produce the photos that will no doubt wow everyone back here on Earth.