Ever since AMD surprise-announced the Radeon VII at CES, there have been questions about what kind of features or capabilities the GPU might bring to market to compete against the RTX Turing. We already know that features like ray tracing aren’t really on the table (you can absolutely run ray tracing workloads on a GPU with specialized ray tracing cores, but the performance impact from doing so tends to be enormous). Rumors that the GPU would pack 128 ROPs — reportedly caused by a mistake on a slide at CES — have since been refined back to earth, leaving us with a 64 ROP configuration.

One possibility for a unique feature was that AMD would leave the GPU’s double-precision mathematical capability intact. The Radeon MI50 that the Radeon VII is based on offers 6.7TFLOPS of double-precision mathematical number-crunching capability and 13.4TFLOPS of single-precision performance. The latter will come to Radeon VII — it even picks up a bit of a boost, at 13.8TFLOPs. But AMD won’t be bringing full FP64 performance to its latest 7nm GPU.

THG reports that the Radeon VII will offer 862GFLOPS of performance or roughly 13 percent of what the MI50 is capable of. This is a bit of an interesting decision for AMD, for several reasons. With the recent focus on AI and ML, both of which tend to prioritize lower types of mathematical precision, not higher, one might expect to see companies artificially restricting performance when using FP16 or INT8 data types rather than continuing to lock down on FP64. Limiting FP64 has always been a way for AMD and Nvidia to ensure that researchers had good reason to buy their top-end cards and it’ll be interesting to see if manufacturers start cracking down in other ways to limit the cross-pollination between platforms. (Nvidia has already begun limiting mixed-mode performance in certain cases on consumer hardware.)

Another amusing note: To the best of my knowledge, the AMD consumer GPU that still offers the best FP64 performance, assuming you can scale or run your app across both GPUs at the same time, is the Radeon HD 7990. That 2013-era GPU offered full FP64 performance across both cores, delivering 1.894TFLOPS of FP64 performance. Granted, it was across two GPUs and used a much older version of GCN — but it also drives home the point that a high-end dual-card from April 2013 still technically offers more FP64 performance than the 509 GFLOPS of the RTX Titan X, the 420GFLOPS on the RTX 2080 Ti, or yes — the 862GFLOPS on the Radeon VII. In fact, just one of the two GPUs aboard the HD 7990 would still theoretically outperform the Radeon VII.

We say theoretically, of course, because differences in GCN, OCL support, and RAM bandwidth might well create a scenario where the older card got trounced, despite on-paper advantages. But neither AMD nor Nvidia have shown much interest in creating an FP64 monster in the consumer space past the HD 7990. This was one area where AMD could have tried to make a differentiating play with its latest high-end GPU — we will have to see what the company has in mind a little closer to launch day. 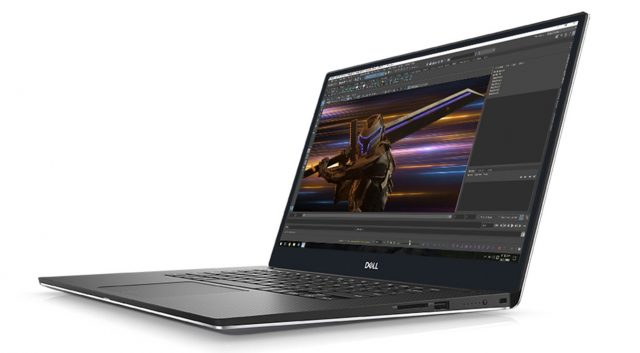 New mobile CPUs and GPUs have helped push the performance of lightweight mobile workstations to new heights. Dell's Precision 5540 is one of the first of the new generation out of the gate with a full complement of the latest components. Here's how that's worked out in practice.