Big trucks are big (obviously), sometimes noisy, get 6 mpg hauling 80,000 pounds), and occasionally cut you off — just not as much as we cut them off. And they’re changing, to be more fuel-efficient, pollute less, and get the goods to far flung customers at lower cost. All that was on display this week at the North American Commercial Vehicle Show (NACV) in Atlanta.

Truckers are under the gun to pollute less, especially since most Class 6 (60,000 pounds of truck and cargo) to Class 8 (80,000 pounds max, truck, trailer and load) trucks run on diesel, which is seen as being tougher on the environment than gasoline engines. Most diesel trucks now use low-sulfur fuel and treat the exhaust with a urea formulation called diesel exhaust fluid, same as diesel pickup trucks and the few remaining diesel cars use. But changes are coming, as trucks shift from turbo-diesel big engines to hybrids to natural gas, battery electric, or hydrogen fuel cell electric.

Here’s our take on the best tracks of NACV. 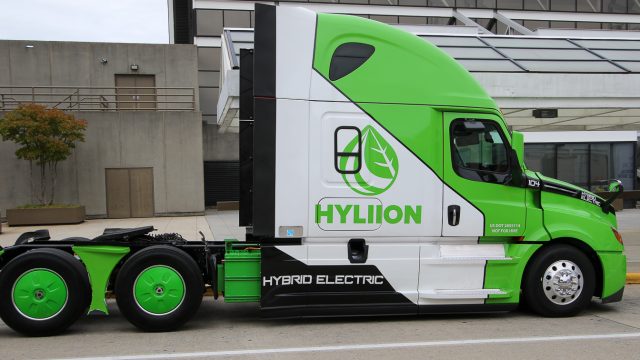 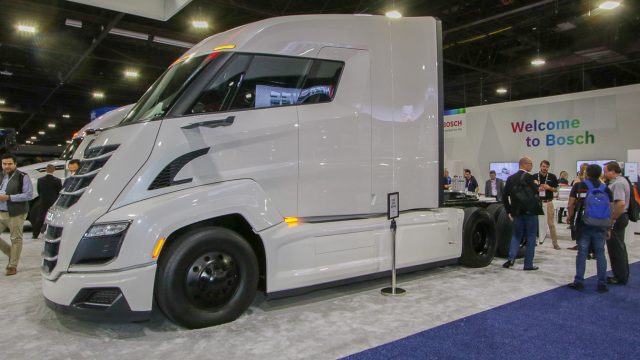 Nikola Motor at the Bosch booth - it&#039;s an investor - showed Nikola Two, a hydrogen fuel cell day cab semi truck with up to 1,000 hp and 2,000 pound-feet of torque, an estimated 500-750 mile range, and 10-15 minute refueling. Nikola One is a sleeper variant (same power, range) and Nicola Tre is a shorter cabover for Europe, Asia and Australia. Nikola also sells electric-only trucks. 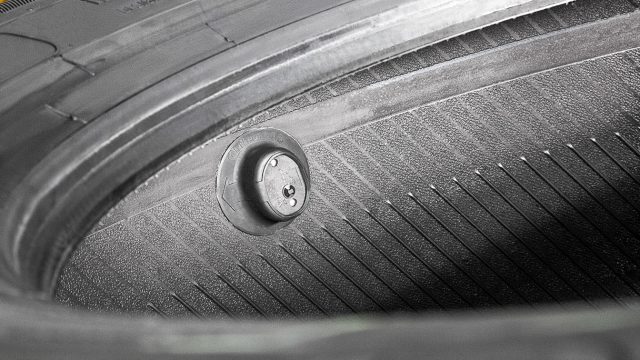 Continental&#039;s intelligent-capable steer tires can be pre-equipped with a tire pressure monitoring system (the bump on the inside of the tire). On big trucks, catastrophic failure (a blowout) can lead to loss of steering. Eventually, all 18 tires on a tractor-trailer might be equipped with TPMS, temperature, and tread depth sensors. 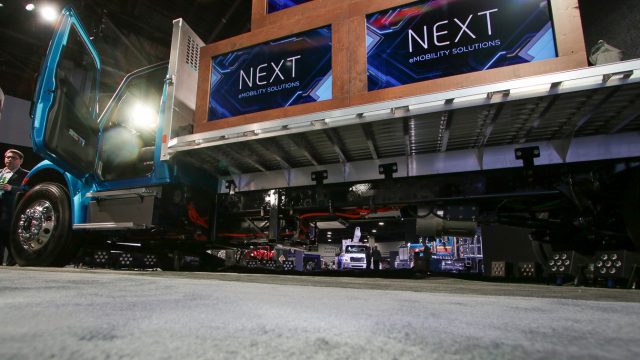 Navistar (International) formed a NEXT eMobility Solutions group and unveiled a medium-duty truck, the eMV Series, wiht 474 kW peakpower (645 hp), and 107-214-321 kWh of battery power, the big one good for 250 miles. Adndreas Renschler, CEO of Traton Group (it holds 17% of Navistar), says one in three buses and trucks will be electric in 15 years. 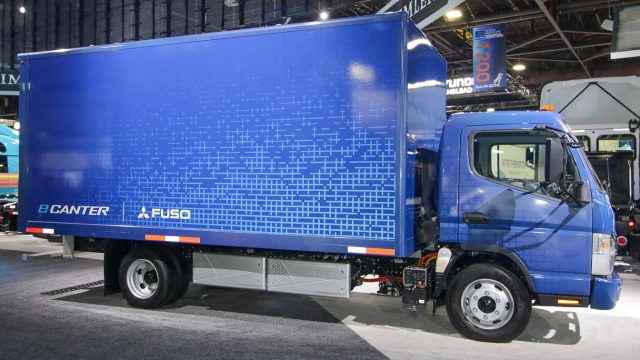 The Fuso eCanter from Mitsubishi-Daimler is a last-mile delivery truck "responding to the public&#039;s demand for clean, quiet urban truck deliveries." It carries 9,000 pounds, develops 185 peak HP, and is good for 80 of those last miles, enough for cities and dense suburbs. It recharges in one hour using a CHAdeMo charger, 8 hours with a standard charger 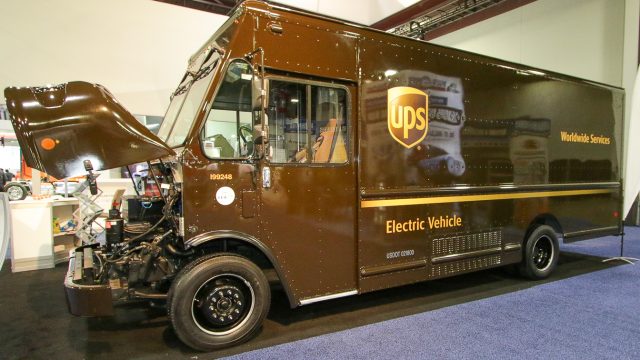 SEA Electronics of New Zealand takes a standard UPS delivery truck based on the Ford F-59 and chassis adds its SEA-Drive 120b powertrain (in place of the gas engine) with as 150 kW motor (250 kW peak) and 136-kWh LiIon battery pack. An 80-amp Level 2 charger charges in six hours. A local delivery truck with lots of stop-and-go provides substantial brake regeneration. UPS is starting to test, order EV trucks. 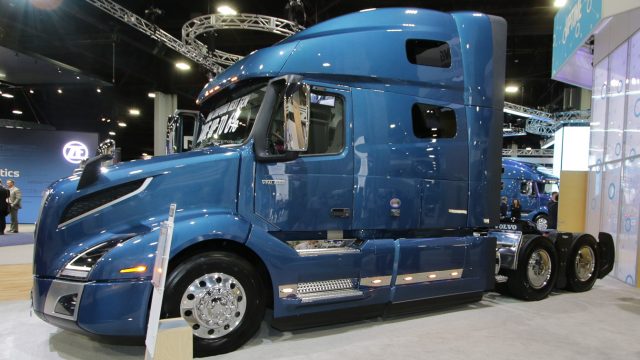 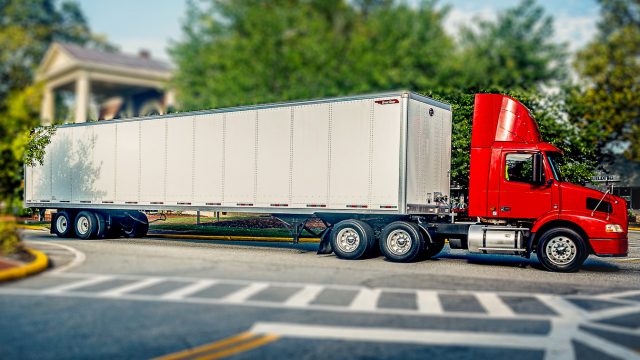 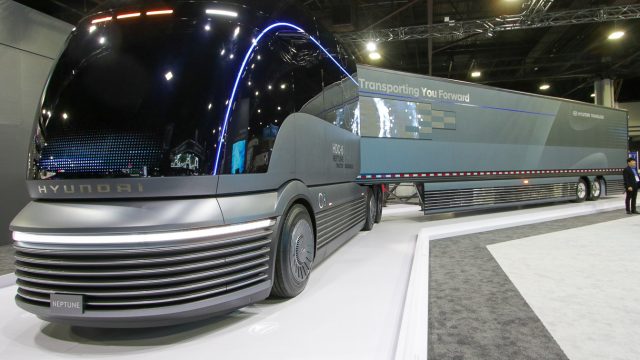 Futuristic star of the NACV show was the Hyundai HDC-6 Neptune concept hydrogen fuel-cell electric trailer capable of crossing the country with only a couple 15-minute fill-ups. A future Level 4 autonomy version lets the driver sleep en route in the "personal studio" (bed, toilet, shower), wake up next day, and drive the final 5 or 50 miles to the cargo depot. 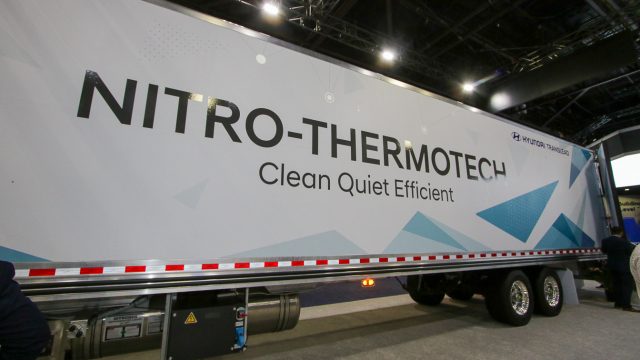 The Hyundai Translead reefer (refrigerated trailer) runs 3-4 days on liquid nitrogen with less temperature variance than a diesel refrigeration trailer. Evaporated nitrogen rejoins the atmosphere that is already 78% nitrogen. Trailer walls are high-density foam with no heat-transferring metal fasteners. Trailer is monitored by telematics not part of the tractor. 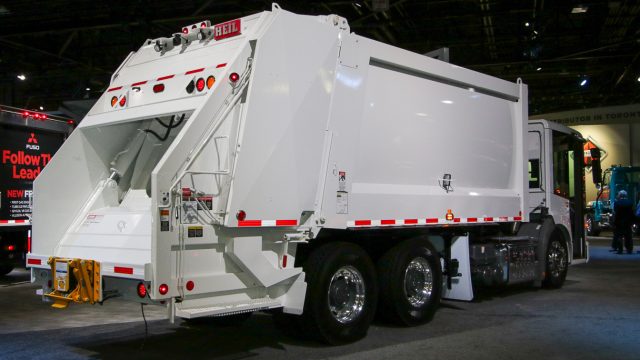 The technology on this Heil rear-loader garbage truck includes a CNG (compressed natural gas) option and an in-cab joystick controlling the loader mechanism. Mostly we included the photo because you will likely NEVER see a garbage truck on the street looking this clean. 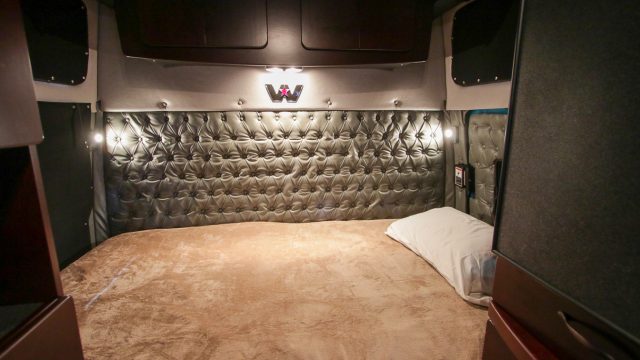 This isn&#039;t really tech, either, but a lot of people are curious: What else is in the truck? This Western Star 5700XE high-roof tractor has a double bed, refrigerator, TV, lots of storage, and emergency exit. Trucks can be outfitted with a stereo and microwave; some beds convert to a dinette. They don&#039;t have built-in toilets (or shower), though some drivers will add a portable chemical toilet.

The traditional powerplant for a big truck is a big engine such as the Cummins X15 turbo-diesel. The impetus for change in trucks comes from the West Coast, especially the Los Angeles basin, especially truck-centric places such as the Port of Long Beach. Ships are required to use shore power, or electric lines from onshore, when in port. The port’s Clean Trucks Program in 2012 banned older, high-polluting drayage trucks, the ones that make port to warehouse runs. As of October 2018, trucks registering to use the port had to be model year 2014 or new.

Outside the US, truckers are or will be restricted from entering large cities unless they meet stiff clean air and/or fuel economy standards. So it’s not just passenger cars under pressure to be cleaner, it’s also commercial trucks, and it’s also – in California – things like lawn mowers, leaf blowers, and charcoal barbecues with restrictions. Small as one lawn mower or one can of charcoal-starter fluid seems, the collective impact is significant in densely populated states. The two-stroke engine designs used by many products are ferociously bad for both the environment and your lungs. A single leaf-blower emits more particulate pollution than a car.

The big no-show of the NACV show was the Tesla Semi battery-electric truck, with a claimed range of 300-500 miles depending on how much battery you buy. The Semi got a Hollywood-style launch in November 2017 and a prototype was spotted on a California street in early 2018. At the launch, Tesla talked about deliveries in 2019, and here we are seven weeks from 2020, with – surprise – no shipping Tesla Semis. Back in April 2019, Tesla reset the date to 2020.

Perhaps tellingly, there was significant action at NACV with hydrogen fuel-cell electric trucks, highlighted by the futuristic Hyundai HDC-6 Neptune. Despite infrastructure issues, truckers may be sensing that’s surmountable. What’s harder to resolve is what lithium-ion batteries weigh, possibly 20,000 of the truck’s 80,000-pound capacity. Plus motors. A diesel engine, transmission, drivetrain, and 250 gallons of clean-diesel fuel good for 2,000 miles weighs less half that.

This was the second biennial North American Commercial Vehicles show and it drew 470-plus exhibitors versus 439 at the 2017 show in Atlanta, organizers said.